Goldea could be the first of a family of new more sophisticated fragrances. 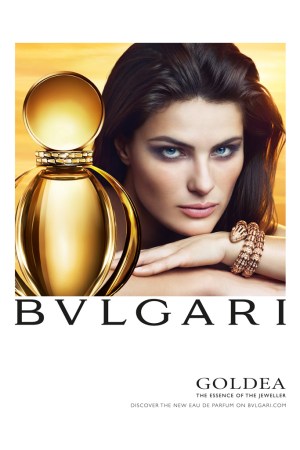 Bulgari is aiming to kick up its fragrance mojo a notch with Goldea — and is changing direction.

After the playful youthfulness of the company’s Omnia series of fragrances, the Rome-based jeweler is shifting to a more womanly sensuality with the new, more potent scent.

The Goldea launch is not a one-shot proposition. Bulgari executives reportedly envision Goldea, a floral oriental, as being the first of a family of like-minded fragrances. A sister scent is already being designed for Asia. According to sources, plans call for having as many as three fragrances on counter at the end of two years.

While Bulgari does not break out projections and none of the executives would discuss figures, industry sources speculate that within three to five years, the Goldea group could come close to rivaling the Omnia collection in combined volume. Sources estimate that the Omnia fragrances have combined sales of nearly $100 million.

Fragrance Foundation award-winning perfumer Alberto Morillas searched through Bulgari’s jewelry library, looking for a gem upon which to position a fragrance. He came up with gold, which the house had never used in perfumery. It seemed appropriate, Manini said, since the metal serves as the setting holding together the jewelry design.

Gold also opened the door to a positioning platform, running through everything from the shiny, sleek bottle design to images of Cleopatra sailing down the Nile with Caesar while decked out in the precious metal.

Hence, the name, gold plus “dea,” Latin for goddess.

The Firmenich perfumer suggested using musk in the formula, partly because Bulgari has used the note in the signature of its fragrances. But he went further, researching every stage of musk in the top note, core and drydown. Manini described its signature as “a bright, golden musk symphony,” adding “that is very rare; it’s a bit risky.”

She noted that the house was very successful with various eau de toilette fragrances, like Bulgari Eau Parfumee and the Omnia series, which tended to be in the eau fraiche family, attracting women in their 20s.

“We decided to build a real eau de parfum signature and to try add a new register,” Manini continued. “Let’s explore perfumery, sensuality, her addiction to femininity. It’s a new register for the brand,” she asserted, noting that the age target was a woman aged 30-plus.

The formula consists of a top note of crystal musk, illuminated by orange blossom and bergamot absolutes, brightened by raspberry. Heart notes include golden musk, the femininity of ylang-ylang, softened by jasmine petals. In the base, a velvet musk is paired with an amber blend, added for sensuality, with a trail of patchouli and Egyptian papyrus. It is meant to echo the sunny scent of Cyperus papyrus, which the Egyptians used in their perfumes, according to the company.

During the global consumer testing, the strongest results came from the U.S., according to Manini. As a result, “we would like to concentrate our efforts a little bit on the U.S. We not launching immediately, we want to build a solid strategy.”

She estimated that the fragrance will be launched in the U.S. “in early 2016.”

Neiman Marcus, Bergdorf Goodman and Saks Fifth Avenue will launch first, she said, adding that the company is negotiating with Bloomingdale’s and Nordstrom.

Goldea will be launched first in Italy and the rest of Europe in October. The Middle East will be rolled out after the U.S. Asia will be last.

Promotion will be driven by a “robust” advertising campaign featuring Isabeli Fontana.