Blue Hamilton and Matt Dallas in the Calvin Klein Eternity for Men campaign.

Calvin Klein will attempt to answer that question when the company launches its first influencer campaign for the Eternity for Men fragrance. The brand uses phrases such as “rugged yet refined” and “masculine yet sensual” to describe the scent. The campaign is intended to recognize athletes, actors, same-sex couples and overall hardworking family men.

“For us, the way we look at masculinity has definitely evolved through time,” said Joanne Bletz, senior vice president of Calvin Klein at Coty Luxury. “We felt this very holistic value to each of these men, their commitment to the partners and children and success. Authenticity is really key for Calvin Klein as a brand.”

The campaign features four-time wrestling world champion and Olympic gold medalist Jordan Burroughs; Thiago Alcântara of the Bayern Munich football club; actor Rick Gonzalez, who stars on the CW TV show “Arrow,” and American actor and singer couple Matt Dallas and Blue Hamilton in their natural elements at home and at work. Each man was tapped by Calvin Klein for excellence in their respective careers and commitment to their families.

Burroughs is seen training in the gym, but also play-wrestling with his children. Gonzalez exits his trailer to prepare to shoot a scene, but also spends time with his family on the beach. Alcântara practices his footwork on the field and spends quality time with his family at home. And Dallas and Hamilton take their child along on a trip through the great outdoors. They each do voiceovers with their partners about their lives, manhood, and their families in the ads, which will run globally. 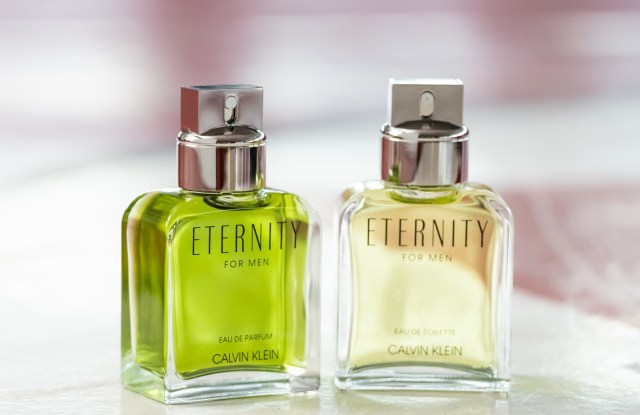 They also each define manhood and masculinity in different ways. Dallas and Hamilton said they “love that today manhood, masculinity and gender roles have been completely redefined.” Gonzales said masculinity is “best defined as a choice to prioritize, provide and protect your loved ones in a way that puts their wellness on all levels at the forefront.” Burroughs summed up manhood in three words — “humility, integrity and discipline” — while Alcântara stressed the importance of being a teammate to his wife “to try to give the best and teach our son the best way we can.” He sees gender roles as “a whole” because he and his wife work as a team.

“We saw an opportunity to bring to life the Eternity narrative by partnering with modern men who embody the brand ideals of romance, love, intimacy and commitment,” said Andra Mielnicki, vice president, global influencers marketing for Coty Luxury.

Romance and intimacy have been ongoing themes for Eternity, Calvin Klein’s first fragrance. Since its debut in 1988, ads for Eternity for Men and for Women showed sensual embraces between lovers and leisure experiences between families. The influencer ads continue a family-focused advertising campaign direction that had been led by actor Jake Gyllenhaal since 2017 when he appeared as a father in his first spot for the brand.

A spokesperson for Calvin Klein said, “Family has played a central role in the Eternity story, so we looked for talent who openly and wholeheartedly embrace the importance of modern-day family. These men represent a new way of telling the Eternity story.”

And the mission is to tell the story in a new way as a means to “recruit the new consumers to our most successful fragrance,” said Bletz. The influencer campaign allows for the brand to, according to Bletz, be “digital-first to our consumers.” This is the brand’s first influencer campaign, and it will run until Father’s Day in 2020 with new content. But the company also said it does not replace Gyllenhaal, who will remain in the print advertisements and be featured in new television ads.