By Julie Naughton on May 7, 2010
View Slideshow 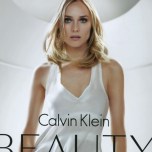 Calvin Klein’s newest fragrance might surprise a few people: its spokeswoman, Diane Kruger, is fully clothed in the advertising and its name is decidedly unprovocative.

In addition, the scent itself is a sophisticated floral designed to appeal to Calvin Klein Collection customers.

“We didn’t have a fragrance that was Collection level,” noted Francisco Costa, creative director of Calvin Klein Collection, of Calvin Klein Beauty, the new women’s scent which will launch in October worldwide. Costa was speaking at a lavish dinner at the brand’s Madison Avenue flagship, which was attended by 70 journalists from around the world. “Certainly sex is in our DNA, but this fragrance speaks to a different audience [than scents like Obsession and Euphoria.] It is very much the spirit of Collection — elegant, sophisticated, timeless and beautiful — and designed to appeal to a more mature customer. This is a woman in her 40s, who is self-assured and secure.” It is also inspired by the calla lily, long an influence for the house, he noted.

“Our intention was to create a higher-end fragrance,” said Michele Scannavini, president of Coty Prestige, which holds the Calvin Klein scent license. While Coty acquired the Calvin Klein scent license from Unilever Prestige in May 2005, Beauty is the first juice developed from start to finish by the Coty team (Euphoria, the brand’s last blockbuster, was being launched as the acquisition happened). “We also think that this scent will be very appealing globally, especially in Europe.”

According to Catherine Walsh, senior vice president of American Fragrances at Coty Prestige, the concept was really a woman’s inner beauty. “It’s very elegant, and that’s why we wanted to work with Diane,” said Walsh, adding that reinforcing the ties between the Calvin Klein fashion and fragrance worlds was also important. “This woman we’re trying to portray — she’s not someone who doesn’t have experiences in her life. We wanted this woman to be worldly and well-traveled, a confident woman and a woman who had strength.”

“From my viewpoint, everything came together,” said Tom Murry, president and chief executive officer of Calvin Klein Inc. “The talent is right on, the fragrance is right on. The project is a little bit of a departure for us — it is more prestige than our other scents, but we think it is the right time for it. We expect a big success.”

In fact, what isn’t modest or different about this scent is its lofty sales goal. While Coty and Calvin Klein Inc. executives refused to discuss sales projections, industry sources estimated Calvin Klein Beauty could do upward of $100 million at retail globally in its first year on counter, with about 25 percent of that figure expected to be done in the U.S.

“We’re planning on having this be a new pillar in the house of Calvin Klein,” said Walsh. “Euphoria is our largest Calvin Klein pillar today, and we want this to be as big, if not bigger. You’ll see it on TV, you’ll see it in print, you’ll see it on the Internet. There is a whole bevy of things. Especially on the Calvin brand, nothing is small — it’s huge, it’s a global initiative.”

“We did quite a bit of research and realized that we had a great market opportunity in the sophisticated and refined space,” said Perlangeli. “Historically, that market has largely been dominated by French brands. We set out to create something in this area — not only to appeal to current consumers, but to appeal to women who perhaps have not purchased from us in the past. It’s also intended to elevate the brand.”

The scent, developed with Sophie Labbé of International Flavors & Fragrances, has top notes of ambrette seeds, a heart of jasmine and a drydown of cedarwood.

“The first time we met, they gave me a sample of the fragrance,” said Kruger, who attended the Tuesday dinner with actor boyfriend Joshua Jackson. “If you want to endorse something as an actress, you want to make sure you that what you’re actually endorsing is something you can sit there and with a straight face and [represent.]”

Was she nervous that she’d end up taking her clothes off for the shoot, as Eva Mendes did in the controversial Secret Obsession ads? “No, not really,” she said with a laugh. “They showed me the concept, and it was classy. So I knew from the beginning that I didn’t have to take my clothes off. To me, what is important — because I am not a model anymore — is to convey emotion. To me, when you buy anything — particularly perfume or beauty products — there’s something that you connect with. Today, in my life and the part in my career where I am, I’m not interested in just looking good. I think it’s about what’s in your eyes, and if someone looks at that photograph, there’s an emotion that comes through.”

“Everyone has a different idea of what beautiful is and what beauty should be,” Kruger said. “It touches everything and surrounds us all. It’s also the way you want to live your life. You can find something beautiful in everything and everyone. If you focus on the beautiful, your life will be much happier.”

In the U.S., the scent will be in about 2,500 department and specialty store doors. Globally, it will be in about 80 markets, including the U.K., Germany, France, Japan and Italy. In fact, noted François Karimi, senior marketing director for the Calvin Klein brand at Coty Prestige, the brand’s goal is to crack the top 20 in France.

An extensive sampling campaign, expected to yield upward of 40 million scented impressions via vials on card, scented strips, deluxe miniatures and LiquaTouch vehicles, is also planned. While executives declined to discuss advertising and promotional spending, industry sources estimated that about $50 million will be spent on advertising and promotion globally within Beauty’s first year on counter.

Kruger has just wrapped “Unknown White Male” with Liam Neeson and Frank Langella. Of future projects, Kruger noted, “I want to play complex characters — female complex characters that have something we can all relate to, that are vulnerable and not perfect. You need the complexity and the layers, and hopefully, when you see this advertising campaign, I hope that’s what will speak to the women that look at it. You want to look at this picture or see the commercial and think, ‘I can touch that woman.’

“To me, everyday people and everyday stories are more interesting than those huge epic roles — which I’ve kind of gotten a taste of with Helen of Troy,” she said with a laugh.

Like many at Monday’s Met gala — which she attended with Costa and Jackson — Kruger was fascinated by Katy Perry’s light-up dress. “At the after party at the Mark, all these people had her up on their shoulders, and she’s just glowing off and on. It was pretty surreal — it was one of those great New York party moments. Katy Perry being thrown around the Mark? OK, that’s New York!”