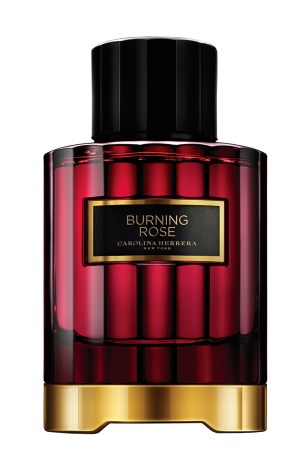 The range of scents, due to make its U.S. debut on Sunday, launched recently in Dubai.

Herrera and her daughter, Carolina Herrera de Báez, creative director of fragrances for House of Herrera, chose Dubai to unveil their fragrances partly because of the prominence of the Middle East in the world perfumery market and the sophistication of the audience. “I was very impressed with their knowledge of scents,” Herrera said.

In a three-day visit to the emirate, which included a cocktail party celebrating the launch and opening of a luxurious pop-up store at The Dubai Mall dedicated to the scent, they shared the collection of six fragrances and four essential oils with customers. “Perfumes are a very important invisible accessory,” Herrera said. “In this collection, the concept of the perfumes with the oils is very important. You can wear each individually or mix them in a very personal way.”

This collection also ushered in an element of fusion between the worlds of fragrance and fashion. Herrera said collaborating as a mother-daughter team was fun “because she talks about her fragrance, and I talk about my fashion.” Inspired by the fragrances, Herrera sought to make the invisibility of scent tangible. She created a capsule collection of six looks to correspond with characteristics of each fragrance, and that’s where the drama came in. For Tuberose, Herrera’s personal favorite, she said the look was a simple crisp short white dress with a tuberose print on the side. Burning Rose, which is a red hue, seeks the qualities of charisma, elegance and glamour. “Red has always been an important color for me. It’s fun, rich and a little mysterious,” said Herrera, who designed an accompanying red gown.

“It’s a more couture approach to fragrance than the other perfumes we have done,” added Herrera de Báez. She initiated the project to create a fragrance collection that expressed the style of her mother. “I wanted to represent different childhood memories. Tuberose is my first memory of a scent. Neroli recalled memories of a childhood garden. For me, a fragrance was a scented oil. I remember when I was a little girl [my mother] was always mixing the two oils of tuberose and jasmine. That was perfume for me. The idea of spritzers came later in life.”

The first scent from House of Herrera, Carolina Herrera New York, which was released 30 years ago, was based on Tuberose. “This collection is really going back to the Carolina Herrera roots,” Herrera de Báez said.

The six scents in the Herrera Confidential line are: Herrera Tuberose, Neroli Boheme, Burning Rose, Amber Desire, Nightfall Patchouli and Oud Couture. The pure oils are: oud, rose, sandalwood and musk. “In the end, it’s a group. You can buy them separately. But while creating them, I saw it as a collection.” The trip to Dubai was her first time introducing customers to the concept. “Some have bought all of them to mix them, which is wonderful to see. Here in Dubai, there is such a strong culture of layering of oils with perfume and incense.”

The two bestsellers have been Oud and Burning Rose fragrances.

The perfumes, which will retail for $240 a bottle in the U.S., are the most premium from House of Herrera. “I wanted to get the real essence of fragrance, to give customers the experience of what it’s like to wear a fragrance without so many notes,” Herrera de Báez said. “Getting to the unadulterated root of a fragrance, whether it’s flower or wood, was very important. It’s harder to work with when you do it that way and more expensive.” The bottles were also designed to offer a premium feel. “We wanted something colorful, but when you see it and hold it, you know it’s something heavy and high luxury and aesthetically beautiful. If you see them all together, you see the colors, but when you twist it around, they almost change in the light, like jewels.”

While not everyone may be able to experience the world of fashion from House of Herrera, Herrera de Báez said it was important for the brand to launch the fragrances internationally.

“Fragrance is very important all over the world. Fashion doesn’t have as many doors as perfume has. People in places like India can buy a perfume and feel they have a bit of the brand.”

Although the Oud fragrance was made as a nod to Arabia, the line was not created exclusively for the Middle East. “This was made for all over the world,” Herrera said.

When it comes to the U.S. Sunday, it will be sold in Herrera boutiques in New York, Dallas and Los Angeles. There will be 10 points of distribution this year and more doors added in 2016 in Europe, the Middle East, Russia, Latin America and the U.S.