The designer hopes to take a bite out of the prestige category this spring with his new scent with Coty, Just Cavalli.

By Julie Naughton and Pete Born and Belisa Silva on October 19, 2012
View Slideshow 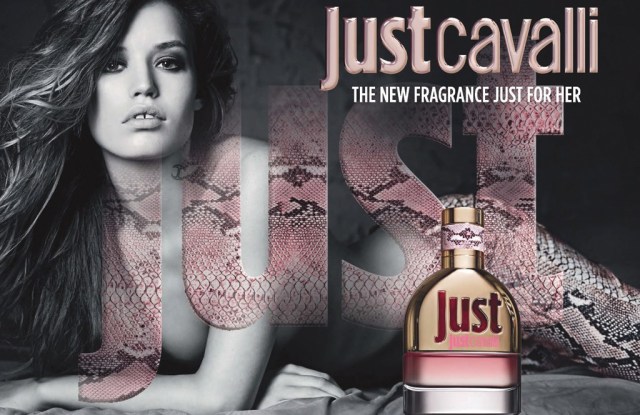 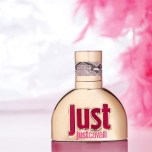 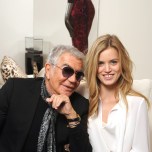 Roberto Cavalli hopes to take a bite out of the prestige fragrance category this spring with his second fragrance with Coty, Just Cavalli.

This story first appeared in the October 19, 2012 issue of WWD. Subscribe Today.

With a Facebook application dubbed “I Bite You” and plans to distribute temporary scented tattoos of a snake bite, the scent is obviously not tame. It will launch globally in February.

During an exclusive interview in his Manhattan showroom (Cavalli calls the city “a laboratory where you build ideas”), he compared fragrance to “a beautiful woman. In the beginning, you judge a woman for her beauty. After, a woman has to be special.”

“Fragrance is important to me because it completes my fashion,” said Cavalli — who is a true believer to the point of having salespeople spritz his eponymous first fragrance with Coty liberally throughout his stores each day. “The fragrance is part of my fashion. Every woman should have my dress, and every woman needs a Cavalli perfume.”

Coty Prestige began its license with Cavalli in July 2011, when his former license with Italian beauty firm ICR-ITF expired. The gregarious designer credits “the love” now lavished on the brand for the success of the Roberto Cavalli scent in markets including Germany, Austria, the U.K. and the Middle East.

Jean Mortier, president of Coty Prestige, noted that the push to launch two fragrance pillars in a year — Just Cavalli, and the first scent Coty launched in February — was part of Coty’s plan to put the designer’s fragrances back on top and “establish a global powerhouse.” He explained, “We wanted to quickly reestablish the Cavalli fragrance business under our development.”

The first juice was about glamour and sensuality; Just Cavalli is “sexy, cool, trendy and edgy,” said Françoise Mariez, senior vice president of marketing for European fragrances at Coty Prestige, who noted that the two scents are aimed at different age targets. While the first was for a more mature woman, Just Cavalli is intended to appeal to women from 20 to 35 years old, with 20 to 25 years being the sweet spot.

Just Cavalli was concocted by Firmenich’s Nathalie Lorson and Fabrice Pellegrin, and is characterized as a creamy sexy floral. It has a top note of neroli, a heart of Tahitian tiare flower and a drydown of creamy palissander wood accord.

TV and print advertising are planned, featuring Georgia May Jagger. TV was directed by Jonas Akerlund, while print was done by Mario Sorrenti. “It’s a seduction from beginning to end,” said Jagger of the campaign, which was shot in Manhattan. “It’s a chase.”

Of Jagger, Cavalli opined: “She represented the kind of woman that I would like to have for my dresses. If I closed my eyes while creating Just Cavalli, I would see her — sexy, but not vulgar. Delicate, with a sweet smile.”

While the designer and Coty executives declined comment on the scent’s sales projections, industry sources estimated that Just Cavalli could do upward of $50 million at retail in its first six months on counter, on par with the first Coty/Cavalli scent. Globally, the brand is in about 30,000 department and specialty stores in 66 countries. In the U.S., which is expected to account for about 10 to 15 percent of the worldwide sales total, the brand is in about 1,200 department and specialty store doors. The advertising and promotional war chest is estimated by industry sources at between $15 million and $20 million globally for the scent’s first six months on counter.

Next on Cavalli’s wish list: a men’s counterpart to Just Cavalli, as well as a color cosmetics line.

“Color cosmetics are my dream,” said Cavalli. “Since the beginning, I’ve said to Coty, ‘When are we going to start with the cosmetics?’ They said we had to do the perfume first. But my world, my fashion, is colors.”

The designer’s yen to do color cosmetics is also influenced by fond memories of the eclectic London boutique Biba in the early Seventies. “Every floor was just like a jewel,” he said. “Every day, the last floor to close was the ground floor, where cosmetics were. I remember that all the girls from London, they used to go to Biba at 7 o’clock, make up themselves and get ready to party. It was full of beautiful girls. My dream is to copy that — to create in all my stores a department where all the beautiful girls can go to prepare themselves for the night.” The target customer? “Women from 15 to 100 years old,” the designer said with a laugh.

Of the recent dust-up in the press between Cavalli and Giorgio Armani, the designer insists it’s the work of the press. “They wanted to create problems,” he said of the report. “It’s not with Armani that I have a problem. I knew from someone else that the show calendar was changed. Armani does what he likes to do, and that is completely right. It was the Camera Nazionale della Moda [which organizes the Milan Fashion Week show calendar]. They should tell me, not make me learn it from somebody else. I’m honored to be friends with [Armani.] I could tell you so many stories about our friendship.” He recounted one when, as a little-known designer, Cavalli was on the beach in St. Barth’s when the well-known Armani happened by. “Suddenly, I see him, and he was, ‘Hi Roberto, how are you?’ He said, ‘You do such beautiful fantastic fashion.’ After that, I got to be well-known very quickly. I think he may be good luck for me. I appreciate him as a person and I appreciate his fashion.” The two have shown together as well, said Cavalli.

Cavalli’s week of interviews and press chores began with a bang Tuesday evening as he celebrated the new fragrance with a large party in a dimly lit multilevel space, held in a private residence in SoHo. The fete drew 200 revelers — including the designer and his wife, Eva, and Jagger, and plied guests with cocktails and light fare as well as personal tarot card readings. The “dolce vita” atmosphere — designed to highlight the fragrance’s concept, “love at first bite” — was also enhanced by black-tie-clad, Champagne-sipping models jumping into a swimming pool and cavorting under water. “This is the edgier, younger side of Roberto Cavalli,” said Michele Scannavini, chief executive officer of Coty Inc., who good-naturedly brandished his prize of the night, a black “bite” tattoo on his neck, also found on virtually everyone in attendance. “For us it’s going to add coolness to the brand for the younger consumer.” Additional entertainment was provided by The Dolls, Karmin and DJ Mike Nouveau. At one point during the night Cavalli tried his hand at clairvoyance, reading the palms of partygoers waiting to enter the “fortune-teller room.” Of his own reading, Cavalli reported, “They said be careful, that I had too much money, that I have to give my money to somebody else. Then [the psychic] gave me her address and I don’t know why.”