Celine Dion says her new fragrance Pure Brilliance is "about the radiance and beauty at the heart of every woman." 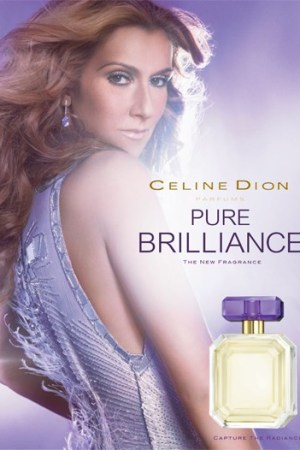 Seven years and $850 million in global retail sales later, Celine Dion’s fragrance business goes on — with a new scent due in September.

This story first appeared in the April 2, 2010 issue of WWD. Subscribe Today.

The fragrance, Pure Brilliance, marks the beginning of another fragrance pillar for Dion, said Steve Mormoris, senior vice president of global marketing for Coty Beauty. “Celine is one of the biggest female singers in history, and the attachment her fans have to her and to her fragrances is astounding. Every fragrance we launch with her does well. She is an extraordinary example of a fragrance brand that has longevity, and I think that is due to the strength of Celine as an audience, as well as the product offerings, which have been true to her character — upbeat and musical in spirit.”

Since Dion joined forces with Coty, eight fragrances — including Pure Brilliance — have been launched. Five, counting this one, are still sold.

“Pure Brilliance is about the radiance and beauty at the heart of every woman,” Dion stated. “It’s the energy within that makes every woman unique.”

The new scent, a fruity floral by Firmenich’s Harry Fremont, has top notes of pear, apple, green leaves and freesia; a heart of honeysuckle and muguet, and a drydown of blonde woods. “It’s a warm, optimistic scent,” said Mormoris. “It’s probably the most dazzling fruity floral we’ve ever produced, actually.”

The bottle, which takes its inspiration from jewels, is triple-faceted — like an emerald — and topped with an amethyst cap and gold collar. The outer box is done in various shades of amethyst.

The Celine Dion fragrance brand is distributed in mass market doors. “Celine is sophisticated, and we could have taken her into prestige distribution, but she is all about being accessible,” said Marsha Brooks, vice president of global marketing, fragrance, for Coty Beauty.

While Coty executives declined to discuss projected sales, industry sources estimated Pure Brilliance would do about $16 million at retail globally in its first year on counter, with about $7 million earmarked for advertising and promotional globally in that time frame.

Print advertising, shot by Alexi Lubomirski, will run in single-page and double-page versions beginning in October fashion, beauty and lifestyle magazines. Extensive sampling — to include vials on card and scented strips — is also planned, with a target of 30 million scented impressions.

Dion — who has taken much of this year off after the conclusion of her 2008-2009 Taking Chances tour, which spanned five continents — heads back to Las Vegas next March to resume her shows there. Before touring, Dion had enjoyed five years of sold-out shows at the Colosseum at Caesar’s Palace in Las Vegas. She is also preparing an album for a fall release.