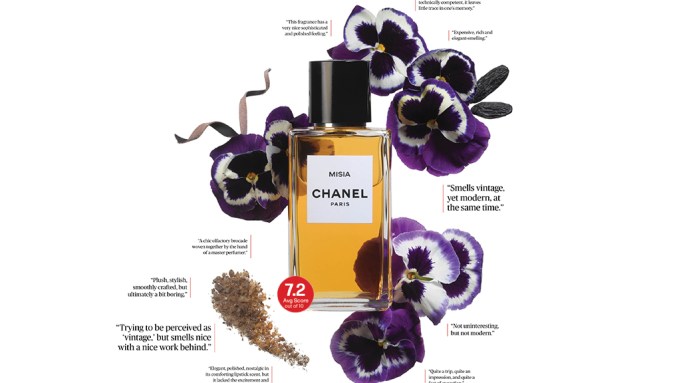 A new generation of product developers is shaking up the fragrance industry. They’ve put the emphasis back on the juice, rather than the high-pitched marketing that’s driven launches in the past.

Keeping in step with these transformative times, WWD has assembled a jury of world-class fragrance experts who will judge various scents for their olfactory quality, revealing the nuances of perfumery’s new world order. Headed by panel chairman Michael Edwards, the jurors represent various facets of the industry, from perfumers to consumers.

Panelists are given unmarked vials of fragrance to smell in a blind, impartial test. The fragrance will be scored on a scale of 10 (the ultimate) to 1 (forgettable), with an average score computed.

The judges will make short critiques of each fragrance, which will be kept anonymous to ensure independent thinking. Scents being judged are new to the market and among the most promising. WWD will buy them at retail, like any consumer.

The first edition of The Smell Test reviews Misia from Les Exclusifs de Chanel. It is a maiden effort at the storied fragrance house by Olivier Polge, one of the fastest-rising stars of international perfumery.

The Verdict: The judges described this scent in a blind test as elegant, sophisticated and nicely made with a vintage feel. Some panel members, however, found the formula a bit boring and lacking emotion.

“Smells vintage, yet modern, at the same time.”

“A chic olfactory brocade woven together by the hand of a master perfumer.”

“Not uninteresting, but not modern.”

“This fragrance has a very nice sophisticated and polished feeling.”

“Trying to be perceived as ‘vintage,’ but smells nice with a nice work behind.”

“Quite a trip, quite an impression, and quite a feat of execution.”

“Elegant, polished, nostalgic in its comforting lipstick scent, but it lacked the excitement and emotion to move me.”

ABOUT THE TEST AND JUDGES: This is a blind test, panelists are given vials of unidentified scent to judge impartially. Each of them gives a score ranging from 1 (forgettable) to 10 (unforgettable) and the numbers are computed into a final grade. The judges, led by chairman Michael Edwards, also make critiques, which are unattributed to encourage candor. The most promising scents are picked for judging in an effort to find and showcase excellence. WWD buys the products at retail, like any other consumer. The esteemed judges are: Michael Edwards, author of “Fragrances of the World” and “Perfume Legends”; Paul Austin, chief executive officer of sensory storytelling agency Austin Advisory Group; Jean-Claude Delville, senior perfumer at Drom; Karen Dubin, founder and ceo of Sniffapalooza; Victoria Frolova, fragrance industry analyst and Bois de Jasmin editor; Christophe Laudamiel, master perfumer at DreamAir; Nathalie Pichard, owner of training and evaluation agency Topnotes; Chantal Roos, cocreator of Roos & Roos Co.; Luca Turin, biophysicist and perfume critic for arabia.style.com, and Kevin Verspoor, founder of PerfumeKev LLC.