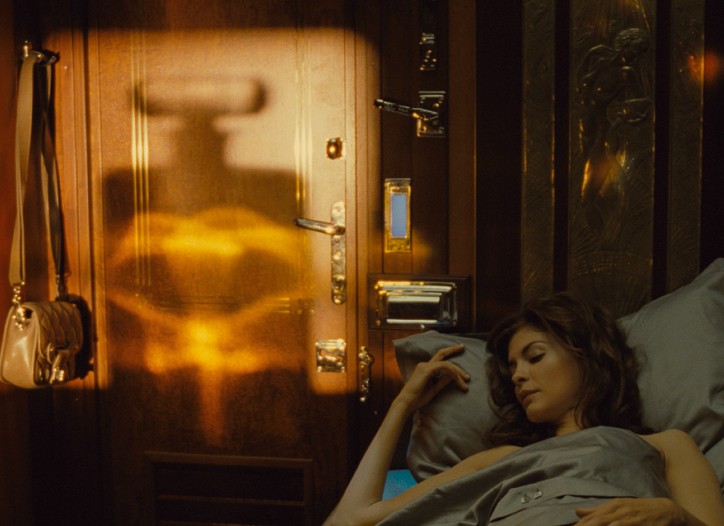 PARIS — Almost five years since Baz Luhrmann and Nicole Kidman united in what was allegedly the costliest advertisement ever, Chanel will unveil the next mini-movie in the No.5 saga, featuring the quintessentially French duo of director Jean-Pierre Jeunet and his leading lady, Audrey Tautou.

Taking the theme of missed encounters between strangers, the commercial depicts doe-eyed Tautou and strapping model Travis Davenport en route from Paris to Istanbul aboard the Orient Express. The two-minute-and-25-second ad breaks on the Internet on May 5 — 88 years to the day that Coco Chanel first introduced No.5, which went on to become the world’s best-selling scent. A product in the No.5 portfolio is sold every six seconds, according to Chanel.

Produced also in three TV versions of 60, 45 and 30 seconds, the ad evokes the seductive power of a woman’s fragrance. Tautou, who first charmed moviegoers in Jeunet’s 2001 hit “Amélie,” first crosses Davenport aboard the train. Later, both unable to sleep, he lingers outside her cabin. In Istanbul, Tautou misses a riverboat, only to photograph it later from another ship, revealing Davenport on its deck. The ad, which recalls the vibrant colors of “Amélie,” plays out to Billie Holiday’s lilting track “I’m a Fool to Want You” and closes with a shot of the couple embracing, standing atop Chanel’s logo formed in a mosaic.

Despite the intimacy depicted, the commercial was a megaproduction. A crew of 250 worked for three weeks last May, filming everywhere from a Paris studio to various Istanbul locales, plus train stations in Limoges, in central France, and in Nice, where the station was temporarily blocked during the hoopla of the Cannes Film Festival.

“Even in the world of advertising, it can be said that the house of Chanel works in an unparalleled level of comfort, which allows you to go to the absolute limits,” said Jeunet, noting he spent at best a week for each of his previous 40 to 50 ads.

From a “Notice to Passengers” to the cabin’s ornate Lalique paneling, no detail is overlooked in the replica carriage interior molded according to originals. Blink and you’ll miss the No.5 references, including the numbers of the train platform and Tautou’s cabin.

Starting with a teaser phase on chaneln5.com in late April, followed by TV commercials then a print ad shot by Dominique Isserman for the second half, the campaign is designed to keep No.5 at the pinnacle of the global fragrance market. “We do not have a business model of launching new fragrances, but in constructing brands,” said Andrea d’Avack, president of Chanel Fragrance and Beauty. The film will launch on the Internet on May 5, said John Galantic, president and chief operating officer for Chanel Inc.

Yet while it remains the bestseller in France, Italy and China, according to NPD Group figures for 2008, No.5 tarries at number four in the U.S., where a national network TV campaign catapulted Chanel’s Coco Mademoiselle to second place, even knocking Estée Lauder’s perennial hit Beautiful from its number-one spot for several months last year.

“In industry terms, we say, ‘That’s one sexy old lady.’ She’s in her 80s now,” said NPD Group’s senior beauty industry analyst Karen Grant. “Nothing has done what that fragrance has done.”

Renewing its campaigns systematically typically draws younger consumers, who are often less aware of No.5. Before the 2004 Kidman ad, awareness among younger consumers hovered around the low 70s, percentagewise, said Grant. By 2005, it had reached almost 80 percent.

Jeunet’s vision of an old-time luxury voyage is very much in sync with the mind-sets of today’s shoppers, continued Grant. “In dreary times, campaigns need to offer a bit of escapism and take you to another place.” And despite the economy, consumers’ primary purchasing motivation isn’t price but how products make them feel, she said.

Noting many brands are now questioning how they previously marketed themselves, Graham Hales, executive director of the London-based Interbrand agency, agreed successful campaigns are those that empathize with today’s consumers. “Some images are almost too extravagant for the way people are feeling right now,” he said, adding the Kidman ad — while perfect for its time — would be too lavish for what’s fast becoming a “make-do-and-mend society.” “It’s not about lowering aspiration appeal over the long term but making slight adjustments in the short term to be less flamboyant for the market in 2009,” he said.

Agreed Galantic, “The spirit of this film is right for the times in which we are living. We believe this film is good timing not only for us but also for the market and the retailers. No.5 conveys authenticity and that reassures the customer; we’re adding newness without adding sku’s, and we have consistently seen a bump — not only in our own fragrance sales but the overall market’s — with campaigns like this one.”

Still, given the global economy, d’Avack cautioned sales expectations are measured. “I don’t think you can compare the economic world of four years ago to the economic world today,” he said, when asked if he hoped to match the 30 percent sales hikes initially achieved by the Luhrmann commercial. Though all categories grew in 2008, Chanel’s beauty business didn’t escape the fourth-quarter slowdown, he said. “It’s more or less accentuated in different markets, but basically we felt decreasing growth,” he said, adding 2008 remained, nonetheless, “a very good year.”

None of the executives would discuss advertising and promotional spending, although industry sources estimated that the global total could be as much as $20 million to $25 million.

In the U.S., Chanel is planning to use the 60-second spot on network TV this fall, with the 45-second version to begin running later, noted Galantic. The uncut, two-minute-and-25-second version will also be used at counter in the U.S.; Chanel’s scents are sold in about 2,000 department and specialty stores in the U.S. As well, a sampling campaign — expected to disseminate more than 50 million deluxe samples, vials on cards, scented strips and scent seals — is planned this year in the U.S.

While this is the first major ad since the death of former artistic director Jacques Helleu, who oversaw Chanel’s beauty image for four decades, Helleu had previously approached Jeunet, who was then tied up with other projects.

Reuniting a renowned director with his muse — most recently Keira Knightley with Joe Wright for Coco Mademoiselle — is now a signature for Chanel, continued d’Avack, noting Tautou landed her role thanks to Jeunet. Jeunet said he cast Tautou because the ad has no dialogue. “In ‘Amélie,’ few people realize Audrey had just one page of dialogue. She had to say everything with her eyes.”

In a statement, Tautou revealed she has turned down offers to front fragrances she doesn’t like. “I needed to have a connection with the product,” she stated.

And the Chanel connection goes beyond No.5. By the time the fragrance ad airs, Anne Fontaine’s “Coco Avant Chanel” movie, starring Tautou as the young Chanel, will have hit French cinemas. It is expected to be released in the U.S. this fall. “There’s no marketing move behind it,” insisted d’Avack, noting that another Chanel movie, Jan Kounen’s “Coco Chanel and Ivor Stravinsky,” is also due out this year. “I personally believe there are things in ‘l’air du temps,’ ” he said. “There is a general interest for Coco Chanel.”