The target user is 18 to 30 years old with a mischievous, rock ’n’ roll edge. 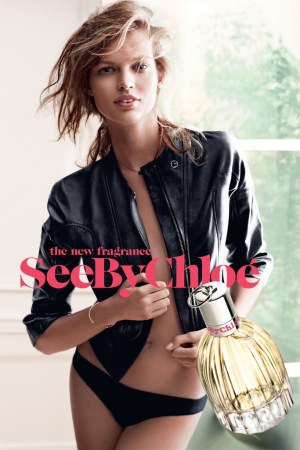 Coty Inc. is adding to its Chloé fragrance franchise this spring with See by Chloé, a scent inspired by the fashion house’s youthful apparel line of the same name.

“Chloé is one of our fastest-growing houses and we are positioning it as a powerhouse,” said Jean Mortier, president of Coty Prestige. “It has a huge global reach and also much potential in the U.S.”

Coty acquired the Chloé scent license in May 2005, as part of an $800 million deal with Unilever that also included the scent licenses for Calvin Klein, Cerruti, Vera Wang and Lagerfeld. The brand currently has seven fragrances: four for the Signature pillar and three for the Love, Chloé pillar. This scent is the first in the See pillar, noted Mortier. He added that the Chloé fragrance business currently does about 50 percent of its sales in Europe, 7 percent in Japan, 15 percent in Asia, 10 percent in the U.S. with the balance in travel retail.

For See by Chloé, the target user is 18 to 30 years old with an mischievous, rock ’n’ roll edge, said Françoise Mariez, senior vice president of marketing for European fragrances at Coty Prestige.

The scent launches globally in February in the U.S., noted Mortier. Robertet’s Michel Almairac concocted the juice, which opens with bergamot, has a heart of apple blossom accord and jasmine, and a drydown of sandalwood and vanilla.

The bottle’s shape is reminiscent of a birdcage, down to a cap with a loop at its top. The glass flacon has three tiny glass feet which allow the bottle to sit very slightly off the surface.

In the U.S., the range will be available in about 1,400 department and specialty stores, bowing first in Saks Fifth Avenue and then rolling into Nordstrom, Sephora and Bloomingdale’s. Print advertising, which in the U.S. will begin running in February and March fashion, beauty and lifestyle magazines, was shot by Fabien Baron and features Bette Franke. “Bette radiates the je ne sais quoi attitude we are trying to convey with this project,” said Mariez, adding that Franke is also the face of the See by Chloé apparel line. Baron shoots the apparel ads, as well.

An extensive digital campaign — still in progress, so Mortier and Mariez are keeping mum on most of it — is also planned. However, noted Mariez, the brand has developed four videos for the campaign which play off a “spin the bottle” theme.

While Mortier and Mariez declined comment on projected sales, industry sources estimated that See by Chloé could do about $70 million at retail globally in its first year on counter. About 10 percent of that total is likely to be done in the U.S., sources speculated.