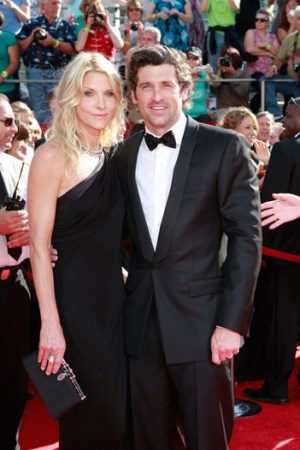 This story first appeared in the June 26, 2009 issue of WWD. Subscribe Today.

The latest addition to Avon Products Inc.’s budding fragrance franchise with the “Grey’s Anatomy” star, Patrick Dempsey 2 marks the second men’s scent from the actor, and one that was inspired by his 10-year marriage to wife Jillian, who has served as Avon’s global creative color director since July 2006.

“Its about the intimacy of two people and the strength you get in a relationship,” explained Dempsey during a phone interview from Los Angeles Tuesday morning, where he is enjoying some quality time with his family before filming for the hit ABC show resumes next month. “I thought, why don’t we just go with ‘2’ and make this about being a couple.”

Due out in the U.S. in November, Patrick Dempsey 2 is the largest men’s fragrance initiative this year from Avon, which launched the actor’s first scent, Unscripted, in November. “Patrick is a big piece of the plan,” said Tracy Haffner, Avon’s vice president of global fragrance marketing and strategic alliances, who added that men’s to women’s fragrance ratio for the company is about 40 to 60. “Men’s has strong growth potential and that’s what we want to capitalize on.”

While executives were mum on sales expectations for the U.S., industry sources estimate the new fragrance could generate upwards of $12 million in first-year sales. Industry expectations for Unscripted in the first year were set at $15 million.

“Patrick is our global men’s celebrity and the launch plans are very strong,” said Haffner. “We have very high expectations.”

Dempsey joins a slew of other designer and celebrity names that Avon has added to its fragrance roster in the last three years, including Derek Jeter, Courteney Cox and Dempsey’s “Sweet Home Alabama” co-star, Reese Witherspoon.

Dempsey, 43, is best known for his role as Dr. Derek Shepherd, aka McDreamy, on “Grey’s Anatomy.”

The actor clearly has taken to the business of developing fragrance.

“We had gone in a certain direction with Unscripted but we also had another scent that we really liked that we had put on the back burner, so when we started working on 2, we had some complexities to work out, but it was a much shorter process,” he explained. “I think both scents are unisex to be honest, but 2 is bit more complex than Unscripted, which is a little softer and fresher.”

Dempsey worked with Ilias Ermenidis of Firmenich on the spicy oriental scent. Top notes are of saffron, mandarin and nutmeg; the heart is of spiced wood accord, green fig and cistus, and the drydown is of olibanum, patchouli, guaiac wood and skin musk accord. The 2.5-oz. fragrance will be priced at $35 and is packaged in a brown glass bottle featuring a debossed bracquet-like design on the front.

Advertising, shot in January on a beach in Malibu, Calif., by Michel Comte, features a very intimate Dempsey facing his wife. “I’m listening to her because her back is to me and she is telling me all these jokes and even some secrets,” he said. In the U.S. the campaign will run in the company’s brochure in October with international rollout scheduled for 2010 when the fragrance launches in Latin America, to be followed by Europe and Southeast Asia.

Dempsey, who recently returned from racing cars at the 24 Hours of Le Mans in France, where he and his Team Seattle finished ninth, said a third fragrance could be expected. “There’s definitely more to come,” he said.