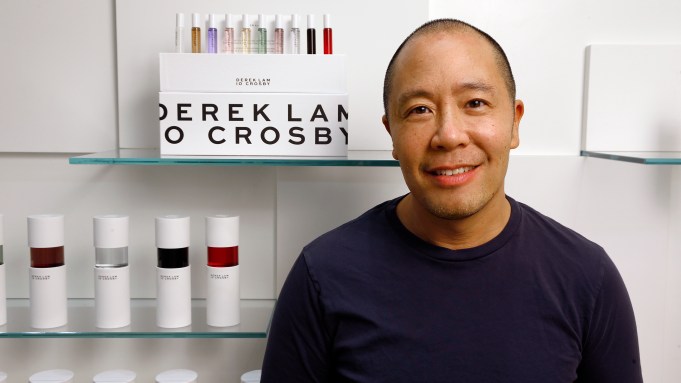 Fragrance is going to the movies.

In the visually driven age of Instagram, Derek Lam and marketers at Butterfly Beauty are experimenting with an unusual way to promote fragrance across social media and attract attention in a Millennial-obsessed world. For the launch Thursday of the Derek Lam 10 Crosby scent collection, what normally would have been a straightforward product introduction has been transformed into urban cinema.

For each of Lam’s 10 fragrances, brief three- to five-minute digital movies have been written and produced, depicting a personal encounter or a moment in the life of the city that has been inspired by the vibe of each scent. The names of the fragrances reveal their offbeat nature: “2 AM Kiss,” “Ellipsis,” “Rain Day,” “Blackout,” “Drunk on Youth,” “Hi Fi,” “Something Wild,” “Silent St.,” “Afloat” and “Looking Glass.”

The cinema concept is being played up. Henry Joost and Ariel Schulman, cofounders of Supermarche/Moxie Pictures Production, who act as creative directors on the project, created a 60-second trailer that is going live Wednesday morning on Lam’s Web site. Moreover, a fragrance and film premiere will be held on Feb. 2 at the Angelika Theater in Manhattan. The fragrances will be distributed beginning Thursday through Sephora stores and on sephora.com. The films will start airing on Feb. 3.

These are not commercials, certainly not in the traditional mold of glossy magazine ads or TV spots. The digital revolution has created challenges along with opportunities, particularly for products that are nonvisual in their impact.

Most of the marketing tactics of the past are now obsolete in terms of effectiveness, according to Robin Burns-McNeill, chairman and cofounder of Batallure Beauty and Butterfly Beauty.

The 10 Crosby collection is aimed at young women aged 25 to 35 and those who think like them. “If she is Millennial-minded, she is actually turned off by being dictated to with an [ad] creative [placed] in a repeated way,” said Burns-McNeill, whose expertise dates back to building Calvin Klein into a fragrance powerhouse in the mid-Eighties. “So how do you capture their attention? You have to create something and place it in a way that they discover it. They not only discover it but they enjoy it, engage in it and engage in it with other people. The story has to be authentic, and the creative content still has to be always aspirational.”

She dismissed the notion that most fragrance growth today is coming from artisanal and niche brands. “It’s not,” she said. “It’s about doing something that’s disruptive and innovative in packaging, in fragrance, in positioning and how you communicate and capture someone’s heart and their attention. Because everything is too similar, too staid, uninspiring, they don’t need it.”

Lam’s venue for inspiration was looking out the window of his former office on SoHo’s Crosby Street and observing people walking by.

“What it is basically are fragrance interpretations of my feelings about New York,” Lam said. “My feelings about the women that I see, especially on Crosby Street — kind of imagining her moments, her life, her occasions. Not just how she looks, but emotional occasions, funny situations, romantic [episodes] — kind of linked together,” Lam said in an interview. “They are related through my lens; literally, me looking out the window.”

The connection between the stories are “things that have touched me,” he said. Those glimpses of imagination led to a series of collaborations, first with four perfumers — Clement Gavarry, Pascal Gaurin, Yves Cassar and Laurent Le Guernec — at International Flavors & Fragrances in creating the scents. The bottle was designed with an architectural feel, complete with a window in the design, to suggest his view of the cityscape. The outer carton is a clean white cylinder.

The cinema project grew out of a collaboration with Joost and Schulman, who are well versed in indie filmmaking. Their first feature, “Catfish,” premiered at the Sundance Film Festival and went into national distribution in 2010. That was followed by “Paranormal Activity 3” in 2011, a suspense film called “Viral” in 2014 and, coming this summer, “Nerve,” starring Emma Roberts and Dave Franco.

In order to create a sense of authenticity, the filmmakers brought in a squad of New York-based writers, directors, actors, dancers and musicians. One of the cast members, Jennifer Westfeldt, broke onto the indie scene with her role in the 2001 hit, “Kissing Jessica Stein.”

Lam stressed that he gave Joost and Schulman the names of the scents and some ideas to work on, no story boards or scripts. “It was really important to me that the the films not be dictated exactly by what I wanted them to be,” Lam said. “I like having this conversation with the client and other creative people and say, ‘What does 2 AM Kiss represent to you? What does Ellipsis represent to you?’

“This whole process is about collaborating and allowing different points of entry into the stories, the fragrances and let them have their kind of discovery,” he continued.

These stories, meant to be glimpses into the daily reality of the city’s 20- and 30-year-olds, touch on moments: The crispness of the first heavy snowfall blanketing New York, the initial awkwardness of a couple on their first date before clicking back in the kitchen of a Chinese noodle shop over a bowl of dumpling soup, the nervousness and trepidation of a power blackout and the anguish of a woman who has been abandoned by her boyfriend.

Schulman noted that commercialism was shunned as the crew built a fantasy world. For the filming, part of Mercer Street, near the Crosby store, was shut down on a Saturday afternoon at the height of the holiday shopping season. “We brought in hundreds of pounds of autumn leaves [from upstate], and there are no trees on Mercer Street,” Schulman said.

He added that the whole context lies in telling New York stories: “A woman who has just been dumped and scorned finding strength in herself and it’s a solo dance number [involving a funky romantic maneuver with an abandoned store dummy]. That same fellow who dumped her is seen later dancing alone at Coney Island, juxtaposed with a guy who has just fallen in love dancing alone on the subway.”

Schulman alluded to another episode “about a doorman at the Crosby Street Hotel who just got a tip large enough that he can finally rent a room for himself in the hotel where he has worked for a decade.”

Lam pointed out that each film was designed to stand on its own, but there is a bit of cohesiveness. Every actor appears in at least two films. “Often the lead character in one film is in the background of another,” he said. “We are hoping people will watch and try to discover the connections.”