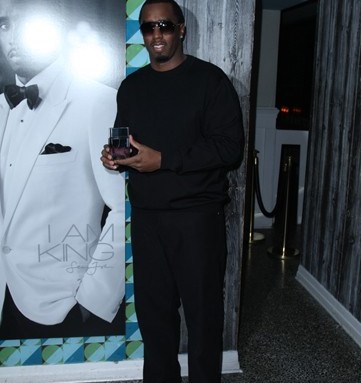 “I’m only about five minutes late because I was running around and spraying people,” said Sean “Diddy” Combs, who showed up to an event more than an hour late — in true celebrity fashion — to celebrate the unveiling a Times Square billboard showing off his second men’s fragrance, I Am King, which was unveiled earlier that day.

William P. Lauder, chief executive officer of the Estée Lauder Cos. Inc.; John Demsey, group president of the firm, and Terry Lundgren, chairman, president and ceo of Macy’s Inc., along with others, packed the Ava Lounge in the Dream Hotel on Monday night to recognize what executives expect to be a significant entry into the Sean John fragrance portfolio.

“Come on, look at me, come on,” Combs said in a joking fashion as he waved for guests to come look at the billboard, which could clearly be seen out the window of the penthouse. Combs was sure to make a clear distinction about the name of the scent: It is not about him, but rather a statement about all men and self-empowerment.

“It’s about empowering men to be responsible,” said Combs. “When [I was] growing up, my grandmother would always say to me, ‘You are what you say you are.’”

Combs dedicated this scent to “all the kings and queens out there,” citing President-elect Barack Obama, Muhammad Ali and Oprah Winfrey.

“Obama has raised self-esteem in all communities. If you work hard, you can be anybody you want to be, and if you have faith, nothing can stand in your way,” said Combs.

“This is grown-up Sean Combs,” Demsey said of the scent. Lundgren was on hand to support Combs, and the fragrance will be carried exclusively at Macy’s in December, before rolling out to full distribution of 2,200 stores.

“We’ve had a long, growing relationship with Sean Jean products throughout our store, and like everything else he does, he’s putting his heart and soul into the launch,” said Lundgren.

Lauder added, “Unforgivable was a huge hit — he’s got his finger on the pulse of something that’s pretty amazing. So we fully expect that I Am King will be a big hit.”

Industry sources estimate it could do upward of $100 million globally in its first year on counter.

On the fashion front, Combs is focusing on the Sean John brand, in addition to the two companies he acquired recently, Zac Posen and Enyce, from Liz Claiborne. When asked whether he’s looking to purchase other fashion companies, he said, “That’s enough on our plate right now, I think.”

Meanwhile, what’s old is new again at Sean John, with former creative director and vice president of marketing Dao-Yi Chow returning to the company Monday in the same role.

The move reunites Chow with Combs, as well as Jeffrey Tweedy, executive vice president of brand development and licensing. Tweedy returned to Sean John in November 2007, after departing for two years following a seven-year run at the urban brand.

“This is the original dream team,” Combs said of the reunited triumvirate during the Monday night event.

Chow joined Sean John in 2000 and exited in 2005 to start his own contemporary men’s wear label, called Public School, with partner Maxwell Osborne. Chow will continue to work on Public School, which is carried in 40 top specialty retailers, including Barneys New York, Oak, Bill Hallman and Fred Segal Man.

At Sean John, he will work closely with Steve McSween, vice president of design for sportswear and licensed collections, as well as help shape all advertising, marketing and visual aspects of the brand, which has annual retail sales in all categories of $525 million.