The Fuel for Life Denim Collection targets a younger consumer, around 18 to 30 years old. 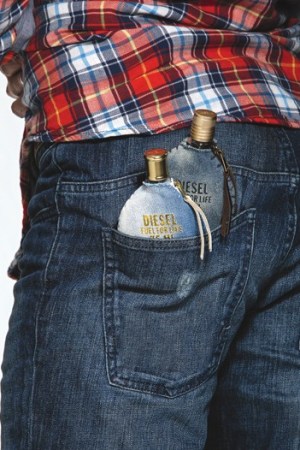 MILAN — The Diesel Fuel for Life fragrance franchise is set to get a fresh injection with its latest introduction, called Fuel for Life Denim Collection, two new scents for men and women produced by L’Oréal, the Italian lifestyle brand’s fragrance licensee.

“Denim is in our DNA. We’ve changed the scent and revamped the bottle and dressed it in denim. This is really the core of the company,” said Renzo Rosso, president and founder of Diesel, referring to the denim-clad flacons and the new juice’s inspiration.

“Initially we wanted to create something outstanding in the fragrance category related to the brand, but at the same time that had its own story. Denim would have been too expected,” said Steeve Hagege, international marketing director of Diesel fragrances, on revving up the original retro-inspired masterbrand launched in 2007. He explained after launching the initial scents, they started to look at how to evolve the franchise.

The new scent’s oval bottles are wrapped in denim, mining the Diesel jeans heritage, with stonewashed and bleached jean packaging that features side zips and leather tabs.

The new scent duo targets a younger consumer, around 18 to 30 years old. “The new scents are more playful, tongue-in-cheek and quirkier than what we were before. The communication is even younger,” Hagege said, referring to Denim’s sexy print advertising shot by Terry Richardson. In his trademark provocative style, the fashion photographer shot model Marloes Horst and Marlon Texeira in a series of suggestive images that feature oversize bottles of the denim-clad juice. A TV spot is also set to run, directed by American music video director Melina Matsoukas.

In attempting to track down this young, digital-savvy consumer, L’Oréal executives plan to invest about 50 percent of Fuel for Life’s turnover on launching and sustaining the new Denim franchise. “Fuel for Life was very strong, but as we launched new fragrances it lost a bit of ground, so the idea is to relaunch the whole franchise and climb back to seventh or eighth position. It’s a big bet for us,” said Hagege. L’Oréal executives declined to specify the sales target, but industry sources estimate the new Denim duo could notch up around 40 million euros (or around $58 million at current exchange) in first-year retail worldwide sales.

The Denim Collection will bolster Diesel’s existing scent portfolio, which includes Fuel for Life Unlimited, a women’s flanker launched in 2008, and solo masculine scent Only The Brave, released in 2009 and currently residing in eighth position in Europe.

The two new scents are set to roll out from May in Europe to around 23,000 doors globally, with the rest of the world following from June. The new juice will launch exclusively in the U.S within Diesel’s 34 stores. “We think it’s a nice match. Abercrombie & Fitch and Gap, for example, have their own lines in-store, and we thought it was interesting to go directly to our consumers, to Diesel fans, with a product that is exclusive to them,” said Hagege.

The juices are fresh, energetic spins on the original masterbrand, and were created by Annick Menardo from Firmenich. “The first one was a glass of whisky; this one is a shot of vodka,” said Hagege, referring to the men’s woody citrus juice featuring citrus and lavender notes and the women’s woody floral blended with raspberry and jasmine petals. Prices start from 39 euros, or $56, for 50-ml. eau du toilette spray and 47 euros, or $68, for the 75-ml.version.

A new women’s Diesel fragrance is also said to be in the pipeline for launch later this year.