A glittering night of scents and celebrities at Alice Tully Hall.

By Peter Born and Julie Naughton on June 18, 2015
View Slideshow 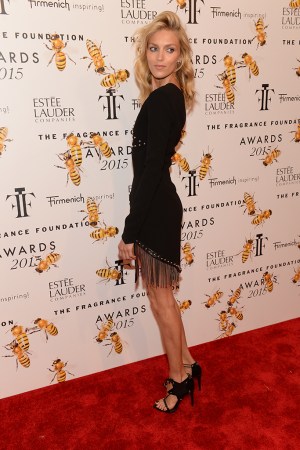 With a dramatic flourish, Fragrance Foundation Awards emcee Alec Baldwin held up his wrist, showing a plastic bracelet, as he opened the 43rd annual show at Lincoln Center’s Alice Tully Hall on Wednesday evening. But the simple plastic bracelet was not a trinket bought from an Elizabeth Street sidewalk vendor — it was his hospital ID bracelet.

RELATED STORY: The Red Carpet at the Fragrance Foundation Awards

Baldwin’s wife, Hilaria, had given birth to their second child, Rafael Thomas Baldwin, at New York Hospital, at 1:30 that morning, and the bracelet identified him as the proud father. “When you think about it, a fragrance is probably responsible for that baby,” he cracked.

It was also a good night for Parfums Christian Dior, which walked away with four awards, and Tom Ford Beauty, which took home two.

Celebrities also helped Dior to win two of its four awards — Women’s Media Campaign of the Year with Charlize Theron for J’adore, and Robert Pattinson for Dior Homme Eau for men. J’adore was also inducted into the Fragrance Hall of Fame, and Dior Homme picked up the trophy for Fragrance of the Year, Men’s Prestige.

Among other high points, Taylor Swift proved that celebrity fragrances aren’t completely dead by winning the Women’s Popular category for her fragrance Incredible Things, although she was not in attendance to pick up the award. Baldwin feigned displeasure: “I can’t believe Taylor Swift didn’t show up,” he said in mock irritation. “I’m so pissed!”

Kendall Jenner, the face of Estée Lauder’s upcoming  Modern Muse le Rouge fragrance, was the inspiration for more than one joke. “I checked my Instagram account before the show, and I had 17 followers,” John Demsey, group president of the Estée Lauder Cos. Inc.,  told Jenner, standing next to him onstage. “You have 48 million followers on all your platforms. I have long way to improve.” He wasn’t the only one dazzled by Jenner: later in the evening, Baldwin took a minute from emceeing duties to hop down to the first row and take a selfie with the model.

However, Demsey had no room for improvement in the award category. He was inducted into the hall of fame with a heartfelt speech acknowledging his Shaker Heights, Ohio, upbringing (mom was in the audience), and his many mentors, including the Lauder family, especially Leonard Lauder, chairman emeritus of the Estée Lauder Cos. Inc.; Fabrizio Freda, president and ceo of the company, and Rose Marie Bravo, a member of Lauder’s board of directors. Bravo gave Demsey his first break in the beauty industry when she recruited him for the Macy’s executive training program.

Demsey thanked so many people he put them into categories, from the Lauder family to the designers and pop-culture figures he’s worked with in his 24 years at Lauder. He confessed that his first boss — not Bravo — told him he wasn’t going to amount to anything. “It’s kind of sweet,” he said with a smile, “because I guess I did amount to something. It’s a testament to following your passion and your dreams and staying incredibly focused.”

Firmenich master perfumer Annie Buzantian delivered a similarly emotional speech as she was also inducted into the organization’s hall of fame. Buzantian’s list of creations over the past four decades includes such enduring fragrances as Estée Lauder Pleasures for women and Tommy by Tommy Hilfiger. She also noted with a shy smile that she started out creating smells for dishwashing liquids and cat litter — until Estée Lauder gave her the encouragement to work in fine fragrances, beginning in 1972. “She gave me the inspiration and the confidence,” said Buzantian.

Buzantian’s two daughters followed her into the fragrance world, she noted proudly. And while appreciative of the honor bestowed on her, she insisted, “The best is yet to come.”