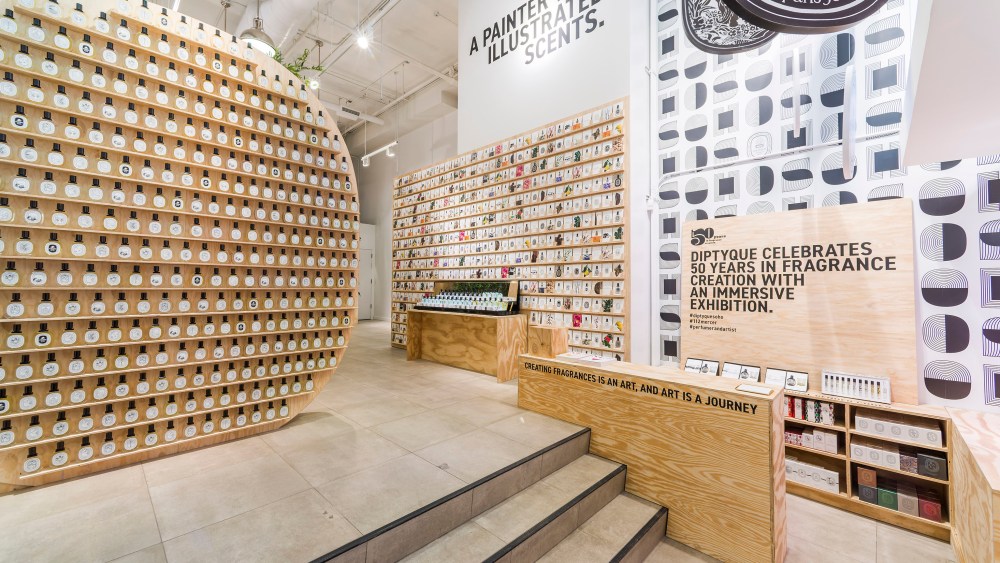 NEW YORK — Diptyque is still widely known as a candle brand in the U.S., despite the fact that half of its sales globally come from personal fragrance.

This is about to change, though, as the brand is preparing to raise its domestic fragrance profile through a series of initiatives that begin today with the opening of a pop-up store on Mercer Street in SoHo. It’s the first retail venue of this kind dedicated solely to fragrance, timed to the 50th anniversary of the release of Diptyque’s initial L’eau scent that bowed in 1968. The 1,100-square-foot space will remain open through the end of May.

The door will serve as a supplemental retail channel to the brand’s existing network of five Manhattan stores (plus a sixth in Dumbo in Brooklyn), but by design, the venue reads more exhibition than purveyor of fragrance. This is largely a result of dramatic floor to ceiling displays of fragrance and art, as well as installations begging to be shared on social media.

“In the U.S. we have a huge opportunity to develop our fragrance business,” said Fabienne Mauny, global chief executive officer of Diptyque and Byredo. “We wanted to do it and tell it in a way which maybe makes it a bit more obvious than just talking about it — and invite people to discover us in our different formats.”

Currently, the brand’s U.S. business is driven by the home category, which comprises 70 percent of the business. The goal, however, is to reach an even split, according to Julien Gommichon, Diptyque and Byredo’s president of the Americas, which will hopefully be fueled by upping brand awareness through social media and increasing the cadence of fragrance launches per year (with marketing efforts cross-promoted throughout Diptyque’s 20 freestanding U.S. doors and digital channels).

“We don’t want it to be a traditional pop up store, we’re not [here to] sell limited edition or special collections. It’s a pop-up store but it’s really a place for experience. We decided to stay long enough to present a different kind of immersion around the brand. That’s the objective,” Gommichon told WWD during a tour of the shop.

Visitors are invited to delve into the history of the brand, he said, communicated through a juxtaposition of traditional “exhibition” elements and digital and tech gadgets. Skewing towards the former, a fragrance wall lined with 364 bottles will greet customers upon entry, and to the right of that, a wall of post cards serves as a call to action for visitors to take and fill out postcards to send to friends and family (Diptyque will mail postcards to the recipient, who can then come to the pop-up to redeem a small gift).

Next up, guests are encouraged to discover Diptyque’s four signature fragrances: L’eau, Do Son, Tam Dao and Philosykos. The first three are each displayed in their own “room,” with a museum-style presentation of fragrance bottles paired with visual elements and detailed histories printed on the walls. For Do Son’s “sensory immersion,” bamboo shoots are interspersed with Do Son eau de toilette and eau de parfums to illustrate Diptyque cofounder Yves Coueslant’s inspiration: summers spent seaside in the pagoda his father built in Do Son, Vietnam. To bring L’eau to life, Diptyque’s first fragrance, bottles sit atop a wall of bricks while screens affixed to the wall play movies about the social, cultural and political climate from 1968 on a loop.

Tam Dao’s installation serves as the designated in-store social media moment. A wooden wall with a human sized cutout shaped like a perfume bottle has a backdrop of lush greenery and flowers so guests can stand behind the cut-out and have their pictures taken. Social media sharing is encouraged.

Continuing on his tour of the store, Gommichon stopped in front of two cabines — each fitting room sized and painted black inside and out — which highlight Diptyque’s two new scents that launched this month, Tempo and Fleur de Peau. Each cabine is outfitted with screens that feature the perfumer of both scents, Olivier Pescheux, as well as illustrators Safia Ouares and Dimitri Rybaltchenko.

Next up, an interactive aromatherapy “bar” allows customers to discover more than 30 raw fragrance materials with a “click-and-sniff” technology that uses a small, USB-charged device that emits scent via scent crystals. On a paper-covered wall behind the gadgets are glasses of markers so visitors can design their own “olfactive landscape” and create their own “scent memory.”

“We want to really tell stories about our fragrance, [because] many people here know us for candles or diffusers,” he explained, adding that a series of weekend activations will take place in the store at various times, including a flower shop, an engraving station and a painter personalizing bottles. “We’ve seen a growth of the haute perfumery category with Creed, Kilian and Frederic Malle — and we’re an iconic fragrance house that many people still don’t know about.”