The burlesque star unveiled her signature eau de parfum at the Hôtel Le Negresco in Nice, France, while the TFWA conference was in full swing in nearby Cannes. 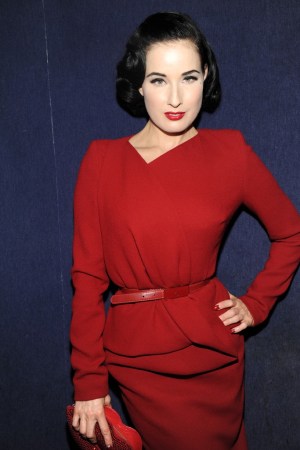 NICE, France — Dita Von Teese introduced her first scent at the Hôtel Le Negresco here on the evening of Sept. 20, while the TFWA conference was in full swing in nearby Cannes.

The burlesque star thanked people who helped on the project. Her fragrance license is held by Luxess and Firmenich perfumer Nathalie Lorson worked on the signature eau de parfum that’s due out in mid-October.

“For me, perfume is at the foundation and the heart of creating glamour,” said Von Teese. “They gave me creative freedom to make this perfume, so thank you.”

Von Teese explained she wanted to make something that spoke to the nonshowgirl side of her, “because there are a lot of people capitalizing on burlesque and showgirls and a lot of pop stars who really want to do a burlesque-style perfume. So it was really important for me to do something that was deeper and more interesting, that was a little bit more about the side of me offstage, me as a real woman and about evoking the spirit of the femme fatale.”

She made it her business to get to know the perfume industry inside and out.

“I’ve studied a lot of perfumes,” said Von Teese, who has a hoard of books on the subject and collects vintage fragrance bottles. She also looked into what her icons, like Marlene Dietrich, had worn.

On an olfactive level, Von Teese added, “It was really important to me that I didn’t smell like sweets. Even when I was a little girl, I hated being a little girl. I always felt like I was watching the clock ticking, thinking, ‘When can I be a grown-up woman? When do I get to wear this lingerie and this perfume? And wear fancy gowns and lipstick?’

“I always wanted to be a grown woman that has something mysterious and elegant,” continued Von Teese.

So notes evoking candy, fruit, vanilla or freshness were out.

“I was really against those things because we’re constantly, as women, told that we should appeal to men, and you know men love vanilla and you know I just really don’t want to smell like a cake,” she said. “I don’t want to be treated like a little girl or be told I am a little girl. I want to wear a perfume that makes me feel strong and powerful, that makes me feel good. Because, ultimately, that’s more important than what attracts a man. My theory is what attracts a man is a confident woman who is not looking for approval from anyone else.”

She opted for notes including Bulgarian rose, peony, jasmine, sandalwood, patchouli and musk.

“I wanted something that is floral but is also interesting, unique and sexy,” she said.

The Dita Von Teese fragrance should initially be introduced in the middle of next month in Germany and German-speaking countries, the U.K., France and Russia, according to Peter Schemberger, managing partner of Luxess.

Company executives would not discuss sales projections, but industry sources estimate the Dita Von Teese fragrance will generate first-year wholesale revenues of between 5 million euros and 7 million euros, or $6.8 million and $9.5 million.

Even before starting to create her own fragrance, Von Teese had in-depth knowledge of scent.

“I used to sell perfume,” she confided, adding it was years ago in Orange County, Calif., where Von Teese also sold cosmetics for Shiseido in a mall.

“I used to work the perfume counter whenever I was needed over there, and to give my opinions,” she said. “So I was always very familiar with all the different fragrances. It always stuck out in my mind back then that Elizabeth Taylor had the only celebrity perfume. I just really never expected I would have the opportunity to do something like this. It’s really a dream come true.”

For decades, Von Teese was true to the Quelques Fleurs fragrance. Then, once she realized she was wearing the same fragrance that her boyfriend’s mother had worn, it was time to make a change.

“For a little while, I dabbled with a lot of different fragrances,” she said. Von Teese wore some of the Jar scents, which she called “very intense and unusual.” Von Teese found them beautiful, “but at the time they were not really that me. I love florals. I love big, lush flowers in a perfume, but I like them with a little bit of mystery.”

She tried numerous different fragrances, but then nothing really struck her as a lifelong scent.

“When I had the opportunity to do this, I enjoyed the process so much that I just thought, I want to do it again,” continued Von Teese. “I want to do more things, and I want to do things that are even more obscure and have more depth and strangeness even. My idea was really to create something that people either loved or they hate. And I am fine with that. If you’re at the mediocre, everyone-likes-it level, then you’re in a place that’s not good. I like something that’s polarizing. I’ve always found that with my career in general. People, either they get me or they don’t get me at all. They either love me or they don’t understand how striptease can be an art form.”

Von Teese has many other fragrance projects in mind.

“I am just dying to do a men’s fragrance,” she enthused. “It’s an idea that came to me recently.”

Von Teese thought of Mae West, one of her idols, and realized she “wouldn’t have had her own perfume. She would have done a men’s fragrance.

“I love the idea of advising men on what they should wear and how to wear it, because I think we often encounter men (even more than women) wearing the wrong fragrance — strong, overpowering stuff that women don’t like. I think I’d love to be sort of an adviser to make something supersophisticated, unusual and unique.”

Her idea is to do something subtler.

“There are elegant ways for men [to be] wearing fragrance. It’s just that they’re not the big commercial brands, because those are sort of too sporty, too spicy, too lemony,” she laughed.

“I’m imagining how great the ad campaign, the commercial could be,” continued Von Teese. “I’d love to have 10 men behind me in tuxedos wearing the fragrance, so we can all enjoy it. I’m just thinking about the fun part. I’m settin’ the tone. I’m doing the groundwork. It’s all about that focus group. I’ll be there for that focus group.”