The the real estate mogul and reality TV star sat down with WWD to talk about his newest men's fragrance, aptly titled Success by Trump. 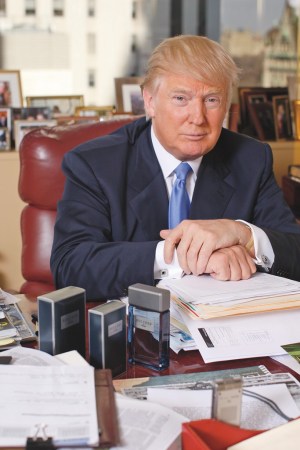 There’s nothing timid about The Donald: Get ready for a Trump fragrance sequel.

Eight years after the Estée Lauder Cos. Inc. introduced Donald Trump The Fragrance, the real estate mogul and reality TV star is returning with Success by Trump, this time under the auspices of The Five Star Fragrance Co.

“The last one did well but it was really meant more for our product, for my company,” he said during a recent interview atop Trump Tower that touched on his political ambitions, his real estate empire, the power of branding and how every celebrity has his day. “I wanted to do a fragrance for all of my clubs, all my buildings and all of my everything. And we still use it,” Trump added. “This one [the second] is meant for that also, but it’s going to be a much more international fragrance. We’re going to go much bigger with it.”

To Trump, the first fragrance was a success in his outlets. But back in November 2004, the level of hype promised much more. It was a time when Trump fever was in full boil, two years after Jennifer Lopez set the fragrance world on fire with Glow, and the celebrity gold rush was in full tilt. Yet, the fragrance fizzled: It reportedly did only a fraction of what had been speculated, according to published accounts at the time and industry sources. It eventually dropped out of the news.

This time will be very different, vowed Rafael Villoldo, vice president of Perfumania Holdings Inc., the parent company of Five Star Fragrance Co. The positioning of the fragrance is based “on more than his name and him personally. It is the lifestyle and the aspiration to what he represents — wealth. The Trump family represents success,” he continued. “It’s a very aspirational name.”

Trump said he met Five Star executives when Stephen Nussdorf, chairman of Perfumania Holdings, came onto the set of Trump’s “Celebrity Apprentice” show to film Kim Kardashian to promote her fragrance. Despite the entrepreneurial nature of the Trump family — daughter Ivanka has jewelry, shoe and a soon-to-come-out clothing line, while wife Melania sells costume jewelry on QVC — there’s a difference between the Trumps and the Kardashians, Villoldo contended. Trump is a lifestyle of more substantial wealth based on real estate. He also maintains that since the launch of the last fragrance, the “Trump family name has grown and become more powerful.” Also he is banking on his belief in the superiority of the Lance McGregor designed packaging, an unusually heavy bottle to denote substance, and the juice, a fresh aromatic fragrance.

Moreover, the launch plan is more targeted. Success by Trump will be aimed at an exclusive with Macy’s, and industry sources estimate the sales target at $3.5 million for the first year on counter. That would translate into a ranking in the top 15 of men’s brands in 500 of Macy’s doors, or 85 percent of the chain. The first fragrance had an exclusive with Federated Department Stores Inc.

Villoldo declined to comment on numbers but said that he plans to present the fragrance to the duty free market in the next several months. Plans also call for rolling distribution out to other department stores in the future. He said Trump will do an appearance at Macy’s Herald Square flagship on April 18.

While Trump points out that real estate is his true business, politics seems to be one of his most fervent passions. With his pugnacious debating style, he rose to number one in the polls among early Republican presidential hopefuls with his relentless “birther” attacks questioning President Obama’s citizenship. He then took himself out of contention and eventually endorsed Mitt Romney for the Republican nomination.

Asked why he dropped out, Trump had an unusual explanation. Because of his Sunday night “Celebrity Apprentice” reality show, the other candidates also would have to be granted access to the same amount of TV airtime under the election fairness doctrine, he claimed. “In other words, if you have a show you’re not allowed to run unless you give all of the other candidates the same two hours on Sunday night,” Trump said. “It’s a terrible rule and law.” He was referring to a rule of the Federal Election Commission.

His only alternative was to wait to enter the race until after the show ends on May 16, and then run for president as an independent, because the Republican primaries would be nearing a head by then. “But as an independent, it’s very, very tough,” he added.

Also, why endorse Romney, when there were reports that some observers thought he would back Newt Gingrich, whose combative style was more in the Trump mold? “He did too,” Trump said with a smile, indicating that Gingrich also thought he was getting the nod.

“I really liked Mitt’s stance on China, his stance on OPEC, I get along with both of them great,” he said, adding that he is not expecting something like a vice presidential slot or a cabinet position in return for the endorsement. “It’s certainly nothing I’m looking at ’cause I just enjoy what I’m doing,” he said. When pressed further, he conceded, “If they would need something and if they’d need help, I’m always there. I want to see the country great again. This country is in big trouble. And you look at what China is doing to us, you look at what the OPEC nations are doing to us, it’s a joke.”

After the interview, Trump was queried about a possible run for mayor of New York when Michael Bloomberg’s term expires. The word from the Trump camp: “He does not have any interest in running for mayor.”

As for the next election cycle in 2016, Trump was noncommittal about a possible run for president. “We’ll have to see what happens here,” he said, but four years is a long time to even think about.”

For now, Trump seems busy enough. He has a fistful of sidelines: men’s suits, dress shirts, cuff links and, above all, men’s ties. Then there’s the Trump home collection — the Serta mattresses and the crystal barware, stemware and giftware made in wife Melania’s home country of Slovenia.

All of these endeavors, backed by his TV show, are spokes in the wheel of his personal branding machine. Whether upbraiding celebrities on TV or merchandising suits or making incendiary statements on the campaign trail, Trump, with all his brio and boisterous charisma, is continually building his profile. He clearly has spent a great deal of time studying the transformative power of notoriety and how it drives retail.

“It’s funny, I’m the only one who will sell a $50 million apartment and also sell a tie,” he said in a reflective moment. Asked how it all works together, he said, “The celebrity aspect of it certainly has helped my real estate a lot. I put the name Trump National on my golf clubs and they fill up. I put the name Trump on a building and I do great with it.

“I don’t do it for the ego; I do it because it works,” he continued. “If it was purely ego, if you said, ‘Put the name Trump and you won’t do as well,’ I wouldn’t put the name on the building. I do much better because the name Trump is on a building or on a club.”

While discussing his political activities, he noted, “Actually I was number one in the polls and that has something to do with ties. You know, it’s all the same thing when you think about it.”

Pondering the nature of celebrity further, he pointed out that it makes for “a pretty complicated word.” It can be ephemeral, many die. But there are so many. “When we’re casting ‘Celebrity Apprentice,’ they say, ‘Who do you want on the show?’ and they’ll give me a list with literally a thousand names on it, all celebrities you’ve heard of.” Then, however, he put his priorities in focus. Referring to the new men’s fragrance, he said, “My main business is real estate. [The fragrance] can never compete with [the real estate] from an economic or a monetary standpoint, even if it’s very successful. So in one way that’s nice, because I can do whatever I want to do. I’m also a private company.”

On April 22, he will promote his new fragrance on his TV show. Trump triumphantly shared the news recently that “Celebrity Apprentice,” which airs on NBC, ranked number one in its time slot against CBS, ABC and Fox among viewers aged 18 to 49 and 25 to 54. He exudes a loyalty to the show while exhibiting a sense of realism about the business. “I hosted ‘Saturday Night Live,’ and executive producer Lorne Michaels came up to me and I said, ‘You know, Lorne, it won’t always be this way. Some day NBC will call and say the ratings are no good and the show is canceled.’ And he said, ‘No, Donald, you’re wrong, they won’t even bother calling,’” Trump recalled with a smile. “He knows, he understands.”

Asked if he would like to do another show, he replied, “I have a lot of options. While I had the success with “Celebrity Apprentice,” it would be very hard to do a second show.”

At the moment, he is concentrating on launching the fragrance. And at least one person who is waiting is Martine Reardon, chief marketing officer of Macy’s Inc. “I am excited about it,” she said, “he has all the ingredients.” She then ticked off Trump’s current successes in the store — dress suits, furnishings, cuff links and especially ties, the number one category. “He is pop culture,” she said. “Everyone wants to look and feel like a celebrity.”

She estimated that the demographic character of his customer is “30-plus. Believe it or not, he does appeal to a younger customer as well. [The customers] get both sides of him.”

The fragrance is being received now and Reardon expects it on counter by the first week of April.

There are four items in the line, two scents — a 1.7-oz. size priced $45 and a 3.5-oz. variety at $55 — and a $40 aftershave and a $14 deodorant. The formula was created with Five Star by Givaudan perfumer Yann Vasnier and fragrance developer Jennifer Mullarkey. The formula consists of top notes of fresh juniper and iced red currant, brushed with hints of coriander. Middle notes feature frozen ginger, fresh bamboo leaves and geranium. Among the bottom notes are vetiver, tonka bean, birch wood and musk.

The print advertising campaign, which will start running in May, consists of a provocative shot of Ximena Navarrete, Miss Universe of 2010.

Trump stated that he decided against putting his picture in the ad “because success has so many different meanings. The ad is a seductive take on the concept of success. Ximena is a beautiful, successful woman. I think her presence appeals to both men and women. And truly — what is sexier than being successful? Nothing.”