The designer is aiming to express the modern urban spirit of her beloved city — and has enlisted Rita Ora to give her a hand. 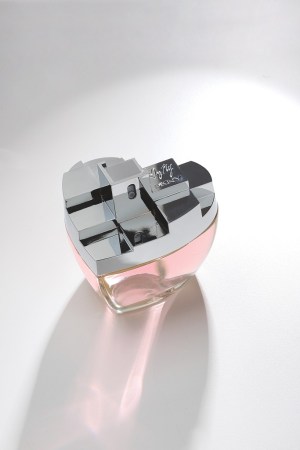 With her newest fragrance, DKNY My NY, Donna Karan is aiming to express the modern urban spirit of her beloved city — and has enlisted Rita Ora to give her a hand.

Ora — a singer, songwriter and actress who will appear in the upcoming movie “Shades of Grey” — stars in the advertising for the new scent, which she calls “energy in a bottle.” Ora has also done print campaigns for DKNY ready-to-wear and for Rimmel, although this is her first fragrance campaign.

“Donna’s a very powerful and confident woman,” Ora told WWD in an exclusive phone interview. “She comes across as very strong, and that’s what I love about her line. It’s a very confident, energetic line and it’s about women who speak their minds. The fragrance celebrates New York City, which is unlike anyplace else in the world. I love the idea of being part of a campaign that captures the spirit of New York and the stories of women here, passionate about their dreams.”

Ora said she finds “great inspiration in New York City and its people. It’s so artistic and vibrant. I moved to NYC [she was born in Kosovo and raised in the U.K.] when I was 17 and began this new chapter in my life. I’m never going to forget New York, because my career started in the city. New York has always been a fairy tale to me.”

Ora’s enthusiasm was a hit with the designer. “If Rita can’t sell it, I don’t know who can,” Karan said with a chuckle. “You’ve got a young, hip woman of New York speaking about it, a woman who goes from day to night. I think Rita’s a great representative of DKNY. She’s full of life, she’s about what everyone wants to feel — energy. And I find her ageless. She’s like this Energizer bunny who can wear anything from track shoes to stilettos, DKNY to Donna Karan. I love the girl as a person, too. She walks the talk.”

The ad campaign, which includes TV and print, was shot in Times Square by Francesco Carrozzini. TV is planned at launch and for the holidays and print ads will begin breaking in August fashion, beauty and lifestyle magazines, said Diane Kim, senior vice president of global marketing for Aramis & Designer Fragrances. A digital campaign will break on Aug. 19, added Dena Nilsen, vice president of North America marketing for Aramis & Designer Fragrances.

Kim added that the digital campaign, which includes a dedicated microsite, will “break the mold of the traditional fragrance launch” by unveiling the print campaign online before it begins running in print. Users are able to share their own New York stories by creating a pixelated heart, similar to what’s in the campaign, with photos of iconic New York City locations and share it on their social platforms, she said. A quiz will allow users to determine what type of New Yorker they are.

The juice, developed by Trudi Loren, senior vice president of corporate fragrance development for the Estée Lauder Cos. Inc. in partnership with International Flavors & Fragrances, has top notes of raspberries, galbanum and pink pepper, a heart of Egyptian jasmine, freesia and orris root, and a drydown of Patchouli Heart LMR, vanilla absolute, musk and ambergris.

In North America, the scent will be in 2,885 department and specialty store doors in the U.S. and in 1,400 doors in Canada.

While executives declined comment on projected sales, industry sources estimated that DKNY My NY, which is another pillar in the DKNY stable, could do upward of $50 million at retail in its first year on counter.