The idea for the designer's first fragrance, due out in July, was to translate his fashion’s DNA and philosophy into a women’s scent. 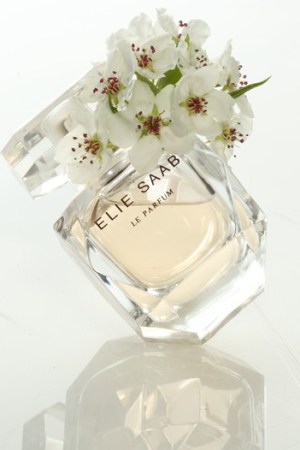 PARIS — The idea for the first Elie Saab fragrance, due out in July, was to translate his fashion’s DNA and philosophy into a women’s scent.

“The first step at [Shiseido’s Beauté Prestige International] is really to get to know the fashion designer,” said Nathalie Helloin Kamel, vice president of Parfums Issey Miyake and Elie Saab at BPI. “We really try to do our best to put his spirit inside a bottle.”

With Elie Saab Le Parfum’s fragrance flacon, BPI executives wanted to elicit the feeling of when the designer’s wedding dress appears on a catwalk. Kamel called it “an instant of magic, of grace.”

The scent bottle design has an interplay and balance between what BPI executives called “the rigorous and the fabulous” that weaves through Saab’s universe. For the heavy glass flacon, they took a cue from a crystal object the designer had on his desk in Beirut for years.

“We were looking for a very beautiful object, really linked to the world of quality, of high fashion,” said Kamel, referring to the Elie Saab fragrance bottle made with Sylvie de France. “So it was very important to have something totally timeless.”

Key to its conception were light, brilliance and transparency.

For the flacon’s outer packaging, the beige gives a nod to the travertine marble and the chocolate brown to the furniture in Saab’s stores. Meantime, white symbolizes his wedding dresses and a touch of gold stands for the sun in Lebanon, said Kamel.

“Here you have a kind of concentrate of all the emblematic codes and colors of the company,” she explained.

While creating the floral solar woody fragrance, Takasago’s Francis Kurkdjian had in mind sensations of femininity, colors and brightness. The juice includes notes of orange blossom, jasmines, patchouli and rose honey plus a cedar woody accord.

Anja Rubik stars in the scent’s advertisement, which was shot by Mert Atlas and Marcus Piggott. It comes in single and double pages.

“We started from the point that when you wear an Elie Saab dress, it’s as if the exceptional has burst into reality,” said Kamel.

The Elie Saab fragrance will be introduced in July in France, the U.S., U.K., Spain, Germany and Lebanon. Other countries are to sell it starting in September. Altogether, it will be carried in about 10,000 doors worldwide.