The actress helped develop Lancôme's Trésor Midnight Rose, the women’s fragrance due out in September. 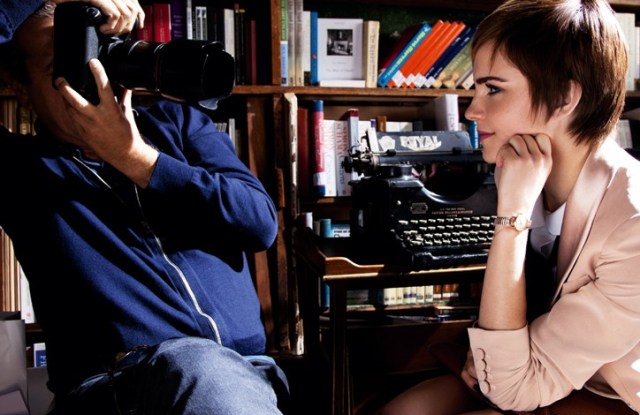 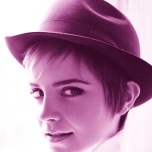 PARIS — At age 21, ingenue actress Emma Watson already boasts more than 10 years of filmmaking experience, and her maturity was plain in her latest project — Lancôme’s Trésor Midnight Rose, the women’s fragrance due out worldwide in September.

“I helped choose the color of the rose,” said Watson, who is a Lancôme ambassador, sitting in the Hôtel Ritz here early evening on Tuesday.

Midnight Rose is the latest addition to the Trésor franchise, which began in 1952 with the original scent of that name. A new version of Trésor came out in 1990, and 20 years later L’Oréal-owned Lancôme introduced Trésor in Love.

“I was involved in the concept for the [ad] film and the tag line, ‘Catch my heart if you can,’” said Watson.

She had a hand, as well, in selecting the fragrance’s name and casting actor Cyril Descours for the campaign. Plus Watson suggested it glean inspiration from Jean-Luc Godard’s “Breathless.”

“The hat [in the ad] was my hat, which I bought at a flea market in Paris,” she continued. “I was very involved in the script. It’s been really fun for me.”

So has her appetite been whetted for directing someday?

“Absolutely. It’s funny, the guys at Lancôme were like, ‘You need to be directing, Emma.’ I had ideas about every aspect. I’m sure I drove them insane,” she said.

Watson ticked off a list of directors she dreams of working with, including Guillermo del Toro, Baz Luhrmann, Dave Fincher, Sofia Coppola and Mike Leigh.

Most recently, Watson’s been playing two different types of characters.

“My role in ‘My Week with Marilyn’ is more of an adult role; I’m playing a young woman, whereas in ‘Perks of Being a Wallflower,’ I am playing a girl coming of age. She’s still very much a teenager,” said Watson, adding she needed to flirt in the former movie (“which is new for me”). “So it’s interesting. I’m kind of treading that line.”

She’s on the verge fashion-wise, too. Often celebrated for her fashion taste, Watson, who recently topped Glamour U.K.’s best-dressed list, described her style as quite clean and simple.

“I think less is more — less makeup, less accessories is better,” she said. “I try to dress age-appropriately, which isn’t actually that easy when obviously high-end clothing is designed for women who are older than I am. It’s a fine line to tread between looking smart and looking ready to go on a red carpet but also looking like I’m 21. It’s quite difficult.”

“Casually I love to wear Isabel Marant, A.P.C., Chloé and agnès b. In American brands, I love Vena Cava. I think Stella McCartney is great, and British brands — obviously, I love Burberry,” she said. “But I mix and match.”

What she wore to her interview was a good example: a Diane von Furstenberg dress paired with Topshop shoes.

“It’s very early stages,” said Watson. The actress also divulged she’s growing her hair (she set off a lather of media excitement when she cut it short last summer) “a bit. I’m excited to try to get it into kind of like a bob.”

Watson said signing on with Lancôme “feels like the right thing to have done.” The brand, she explained, “has this amazing heritage and this amazing history. It’s very well-established but at the same time seems to be at the forefront.”

“Being back in Paris for Lancôme feels like I’m coming home,” she said.