With an investment from Puig, Eric Buterbaugh’s line of floral fragrances is growing from a one-man-show to a niche label that’s a hit with retailers. 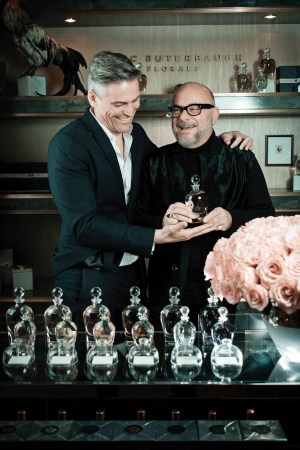 This story first appeared in the May 4, 2016 issue of WWD. Subscribe Today.

A year after its launch, Eric Buterbaugh Florals has scored a minority investment from Puig and prime positions at Saks Fifth Avenue and Bergdorf Goodman. The budding Los Angeles fragrance brand has cut through the often esoteric clutter of niche perfumery with a refreshingly simple concept: flower-centered fragrances dreamed up by its namesake celebrity florist.

“In an industry that has seen an explosion of niche fragrance propositions, we believe that only those that have a real ‘raison d’être’ will survive. Eric’s credibility, knowledge and creativity around the flower world give the brand a tremendous opportunity to translate his know-how into the fragrance arena,” said Marc Puig, chairman and chief executive officer of Puig, the Barcelona-based perfume and fashion company that acquired Penhaligon’s and L’Artisan Parfumeur in 2015. “It’s an exciting new proposition.”

Department stores were giddy about introducing EB Florals, which has been sold at Buterbaugh’s L.A. fragrance and art studio, in time for Mother’s Day shopping. Bergdorf Goodman started inviting shoppers into the world of the brand with a pop-up floral shop containing bouquets curated by Buterbaugh. “It brings to life what he does. It’s not just about a new scent; it’s also about the story behind it,” said Elizabeth von der Goltz, senior vice president and general merchandise manager of fine apparel, 5F contemporary, jewelry and beauty at the fashion store. “He has such a unique story, and it really does tie in. It seems like a very personal project for him and people love to have that story behind a fragrance, especially at this level.”

At Saks, where EB Florals premiered last week online and at stores in Houston, Las Vegas and Beverly Hills, Kate Oldham, senior vice president and general merchandise manager of beauty, lingerie and swimwear, predicted it would be “hugely successful.” “We look at brands all the time, and it’s rare we have a uniform reaction, and such a positive and emotional reaction when we see something,” she said. “We just thought it was incredibly authentic.”

Buterbaugh, whose floral operation has been housed at the Four Seasons Hotel in Beverly Hills for 17 years, toyed with the idea of founding a fragrance brand long before it came to fruition. “It’s crazy. I’ve always actually wanted to do it,” he said. “When I was a little kid growing up in Oklahoma, I loved smelly stuff. I had every bubble bath, every cologne, every perfume. I never differentiated between male or female. If I thought it smelled good, I loved it. Secretly, I wanted to do this brand for years and tried to figure out how to make it happen. I tried to pull in people in the [beauty] industry and it never felt right.”

In 2014, a venture capitalist familiar with Buterbaugh’s fragrance aspirations connected him to former Lancôme executive Fabrice Croisé, who was immediately won over by the notion of a fragrance brand with flowers at its heart. “We clicked. We spent five minutes in the office of this [venture capitalist] guy and we were chatting on the street for two hours after,” he said. “I worked in perfume all my life. So, for me, it was a dream of sorts [to establish a brand], but a dream I had never entertained. Then, Eric comes into my life, and he is a walking fragrance story. He has such an exquisite knowledge of florals and, with flowers being the first ingredient in fragrances, there is a connection in the minds of everyone. It is so obvious.”

A month after their meeting, Croisé and Buterbaugh began developing EB Florals’ fragrances. They agreed that Firmenich, which Croisé had worked with previously and held in high regard, would concoct them. “We told them, ‘You have no cost restrictions on ingredients. You can work with everything,'” Croisé said. Buterbaugh chimed in: “We wanted to create the most beautiful collection of fragrances ever. We submitted names of flowers that I loved, and that I was working with, and also ones that I’m not as crazy about. Usually, if they are working for a huge fragrance house, that fragrance house does market research for a year in every country in the world, and they make 200 or 300 changes to their original recipe. We weren’t operating that way. They could see things would come out in the world the way they envisioned them.”

Firmenich came back to Croisé and Buterbaugh with 34 fragrances, a sum that was whittled down to 10, two of which EB Florals has kept under wraps for future releases. The noses Alberto Morillas, Pierre Negrin, Ilias Ermenidis, Harry Fremont and Honorine Blanc were involved in producing perfumes in the initial lineup now entering retailers that features fragrances devoted to hyacinth, lily of the valley, tuberose, jasmine, lavender, violet and rose. At Buterbaugh’s studio, where fragrances are priced at $295 for a 100-ml. bottle and $495 for a 250-ml. bottle, Croisé revealed sales have been balanced between the scents, but the retailers are particularly fond of EB Florals’ two rose scents, Sultry and Thorns.

Oldham described Sultry as “an unexpected take on rose.” More generally, she said, “All of the fragrances are based in florals, but they are not the overpowering florals you might think of. They are nuanced, subtle and interesting.”

Buterbaugh commented that a gentle approach to scent binds the EB Florals’ fragrances together. “You are not going to get on an elevator with someone wearing one of them and think, ‘Oh God, you overdid it,'” he emphasized.

Large fragrance companies circled EB Florals almost from the outset, and the brand’s early results demonstrated they weren’t circling without reason. In six to seven months at the L.A. location, Croisé divulged sales topped $300,000. “There are really good prospects for growth for the brand. It is not [shown] only in terms of figures, but also in the feedback we are getting,” he said. Puig certainly believes Croisé and Buterbaugh understand how to run EB Florals lucratively. The brand will continue to be managed autonomously.

It was important to Buterbaugh and Croisé that Puig take a noncontrolling stake in EB Florals. Mulling whether to move forward with the investment, Croisé said, “You ask yourself a lot of questions around control and influence, and also around market reach and intelligence. It is a very, very, very important decision because it only happens once in the history of a brand. It usually happens between the five- and 10-year mark. It wasn’t like we hesitated for a long time, but there was a conversation between the two of us, and I think we came to the right decision.” Buterbaugh said the partnership with Puig is “like having a very smart big brother. If you have any questions about anything, you have someone to go to. It feels like we have a safe space to go to and get advice.”

Puig has advised EB Florals to restrain its distribution. Prior to the company’s investment, Croisé and Buterbaugh planned to roll the brand out to 50 to 100 doors by the end of 2017. The plan today is to limit its retail network to 20 doors worldwide by that date. EB Florals is heading to Saks’ Toronto store, its first outside the U.S., in May and, three months later, it will make its European debut at Le Bon Marché in Paris. A yet-to-be-determined prestige London department store is likely to be the next major retail push.

“Building a brand like this requires that, wherever you choose to be present, you can do so with a strong statement. This can be done only when there is a partnership between retailer and brand. We believe that you can only achieve that strategy with a very exclusive distribution policy,” Puig said. Croisé added, “We can restrict our distribution strategy for three to four years to something that’s very focused, and we can really go in-depth where we choose to go. Four years from now, we will see.”