The German budget cosmetics power brand will launch a range of six eaux de toilette for girls and young women that aim for the experiential. 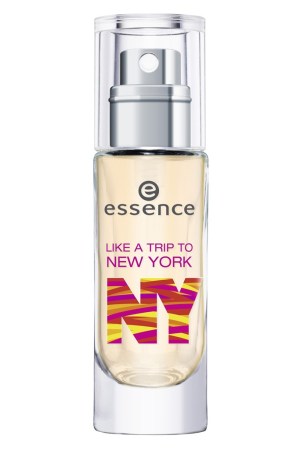 BERLIN — German budget cosmetics power brand Essence turns 10 this year, and to celebrate, the upstart is nosing into new territory — the fragrance market.

Starting in June, Essence will launch a range of six eaux de toilette for girls and young women that aim for the experiential, calling to mind fun memories and dreams with the slogan “Choose your mood — it’s just one spray away!”  Like a Walk in the Summer Rain, Like a Trip to New York, Like a Day in a Candy Shop, Like a First Day in Spring, Like a New Love and Like a Girls’ Night Out will be priced at 6.99 euros, or $8.93, for 50 ml. and 2.99 euros, or $3.82, for a 10-ml. purse size.

The fragrance series was created by five perfumers from Robertet, while bottles and packaging were designed in-house at Sulzbach, Germany-based Cosnova, the parent company of Essence and sister brand Catrice. Painted glass bottles have translucent caps and a color-coordinated ribbon at the neck — the ribbon theme continues across the packaging.

Essence has previously released fragrances as part of the 24 themed limited editions they release per year; the company says its customers were consistently clamoring for more scents.

Essence’s scent range will launch first in Germany, Austria, Switzerland and the Netherlands, with Italy, Spain and Ireland following close behind. A launch date for North America, where Essence is in Ulta stores and Canada’s Shoppers Drug Mart, has not yet been planned.

“We did a lot of work to create unique Essence fragrances, as we do not want to smell like another brand or perfume. Our perfumers worked exclusively on the briefings we gave them — inspiration was our special concept, mood pictures and the target group itself — no other fragrances. Same for the design of bottle, cap and folding boxes: we have built our own molds for the flacons and caps to differ from the other fragrance brands in the market,” explains Christina Oster-Daum, co-founder and chief executive officer of Cosnova.

The scent line will be introduced via in-store display in the cosmetics area, and then be moved to the fragrance section. Stores have greeted the brand expansion with enthusiasm, says Oster-Daum, with most retailers signing on to sell all six scents in both sizes.

“As we already had several successful perfumes in limited editions since 2008, we are very confident that we will establish Essence as a convincing fragrance brand,” she says. Oster-Daum also believes the scents could be future contenders for Germany’s Duftstars fragrance awards.

If Essence’s color cosmetics track record is any indication, there could be a budget fragrance wave ahead. The German brand’s quick success spurred a few copycats in the budget cosmetics game, some from global makeup giants.  According to Euromonitor International, Essence is the number-one value cosmetics brand in the world, and the company’s growth seems unstoppable.