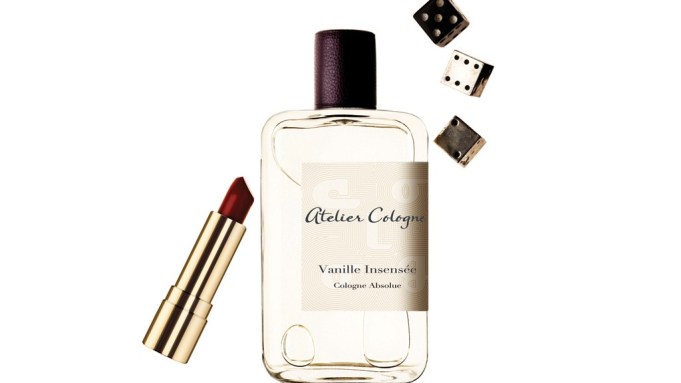 MILAN ­— The artisanal fragrance movement is steadily gaining steam with retailers. Attendance at Esxence, an annual four-day niche perfume salon held here, was up this year by 12.86 percent, with a total of 5,572 visitors. The fair wrapped up its fourth edition on Sunday at La Permanente museum, where 155 international brands — a third of them new to the fair — showcased their wares.

Christophe Cervasel and partner Sylvie Ganter, founders of Atelier Cologne, a Paris- and New York-based brand with a Mediterranean flavor, devised a line of absolute colognes that each evoke a highly specific moment, such as a summer gathering of friends sharing breakfast and fresh oranges, or a man feeling lucky as he strides confidently across wet grass. The newest scent, Vanille Insensée, ($170 for a 6.7-oz. spray) relies on vanilla, jasmine, fresh lime, oak moss, woods and spicy coriander to conjure the image of a man who suddenly realizes his former flame is standing before him, wearing his perfume. Atelier Cologne is available in 150 doors worldwide and two new stores, in Paris and Los Angeles, are slated to open this year and in 2013.

Cervasel, who was at Esxence for the second time, said there is growing interest among retailers for more individualistic products, noting that Galeries Lafayette in Paris had recently set up an “exceptional perfumes” area. Mirella Siciliano, buying manager at La Rinascente in Milan, spoke highly of Esxence, noting that most major niche labels were present, in addition to “a pretty good number of new brands.”

Romano Ricci, founder of Juliette Has a Gun, said customers are feeling “increasingly lost” in commercial chains and are looking for more-personal products. Describing perfume as “a seductive weapon,” and himself as “a lover of singularities,” Ricci said he creates fragrances around olfactory portraits of different types of femininity. Italian distributor Beauty San showcased Ricci’s latest fragrances, including the musky, breezy Romantina with orange blossom and vanilla, which starts at 69 euros, or $90, for the 1.7-oz. version, and the patchouli, Bulgarian rose and vanilla-inflected Vengeance Extrême, which retails for 103 euros, or about $135, for 3.3 oz.

Andrea Maack, the Icelandic visual artist who launched her fragrance line in 2011, was showing a colorful cashmere scarf printed with her artwork. “Not everyone likes to wear perfume,” on the skin, Maack said, explaining that the scarf could be sprayed instead. Her fragrances are available at roughly 60 doors worldwide, and the scarf will be sold in select locations for approximately 180 pounds, or $288.

The artist was also showing Coal, a fragrance that will hit stores in June. While working on coal sketches, Maack became interested in the mineral, and created a unisex fragrance that contains both coal and paper, connecting her art with her perfume.

Also promoting a bridge to the art world were Christine Gustafsson and Niclas Lydeen, founders of the Swedish brand Agonist. Launched in 2008, the brand became known for its natural fragrances contained in intricate handblown glass sculptures. But the bottles’ 1,000 euro, or $1,330, price tag was out of reach for many consumers. All six fragrances will be in stores as of May in a spray version that will retail at about 120 euros, or $160, each. With a broad smile, Lydeen compared the sculpture and spray bottles to “haute couture and ready-to-wear.” He said that by the end of the year Agonist will be at between 50 and 100 doors worldwide.

Ben Gorham, founder and owner of Stockholm-based brand Byredo, was presenting new leather travel cases, available in a variety of colors, for his line of 15 fragrances. He said business has been especially good in the U.S., France and the U.K., and he is currently considering expansion in Asia, following Byredo’s recent Japanese launch. “I’m going to Korea in a few weeks,” Gorham noted.

Celso Fadelli, co-founder of Esxence and chief executive officer of Intertrade Europe Group, said this year’s exhibition had a noticeable Asian presence. “Already last year there were many Russian and Eastern European visitors, but there were not necessarily many Asians. Now there are people from Korea, Hong Kong, Japan and China,” he said.

Japanese brand Nippon Kodo, which specializes in high-quality incense at a wide price range (3 euros to 2,000 euros, or about $4 to $2,630), was showing its brand KOJU for the first time in Europe at Esxence, said Pierre-Yves Colombel, marketing manager.

“Perfume is also linked to smoke,” he said, emphasizing the ritual element of fragrances. The new KOJU 15/75 incense, named for a 16th-century Japanese perfume master, offers five notes, each representing a different life phase, and will sell in Europe at about 35 euros, or $46, at approximately 50 concept and department stores, such as Printemps in Paris.

Thai brand Pañpuri was also at Esxence for the first time, presenting its line of certified organic bath, body and home products, including candles hand-poured into handblown glass tumblers. Marketing director Coelio Jamet described the company as inspired by Buddhist philosophy and the idea that “beauty comes from within.”