Scene at Esxence in Milan.

MILAN — The 11th edition of Esxence — The Scent of Excellence marked a maturity test for the artistic perfumery show.

The four-day event was scheduled across a national holiday on April 25, which before the show left companies uncertain about what the turnout would be. Yet the hallways of “The Mall” venue were busier than during previous editions, consolidating Esxence’s role as a key stop for executives in the sector.

In particular, the show, which closed April 28, attracted 7,890 attendees from 77 countries, a 5 percent increase compared to last year. Visitors discovered and tried the fragrances of 221 international perfumery houses, 130 of which were showcased in the Spotlight section dedicated to emerging labels.

In addition, side projects aimed at further promoting the niche fragrance category both at the show and across the city — including a deeper focus on indie brands in the Experience Lab area and collaborations with the worlds of art, music and technology — were popular with both the industry and the public.

“Over these 10 years we gave to existing brands the opportunity to expand internationally, strengthen their commercial distribution, enhance their visibility and introduce new products through an exceptional showcase,” said Esxence cofounder Silvio Levi. “Our main goal is to foster the future of this sector, setting in advance the new trends. This is what happened with some brands showcasing in the early editions of Esxence [that have] now turned into bestsellers of masstige.”

The importance of educating consumers about niche fragrances was one of the hottest topics at the show, often mentioned in relation to the opportunities offered by online platforms and social media.

“In order to help people with the complex and very personal search for a perfume, we need to teach them the language first,” said Anastasia Sokolow, founder of the niche fragrance label Sulékó, which exhibited at the show for the first time.

To this end, the brand has an online shop that not only sells its scents but also offers master-class packages for 45 euros. Through the e-commerce site, a visitor can buy private access to an online workshop and receive a discovery box of samples containing both the raw ingredients and final fragrances to try during a 60-minute video tutorial hosted by Sokolow herself. In addition, customers receive a 25 percent discount on the purchase of their first Sulékó scent.

“We host this kind of workshop also live for private companies and schools…The next step is to offer one-to-one virtual appointments via Webcam,” said Sokolow, who also periodically sends newsletters to her subscribers, sharing information about the origins of raw materials.

Launched in 2014, Sulékó attracted the interest of Russian, Middle Eastern and American buyers at Esxence, thanks to its combination of perfumery and sculpture, as each fragrance is contained in porcelain structures created by artists Joëlle Fèvre and Alain Fichot to visually translate the olfactory compositions. Priced at 260 euros, each piece is made of an artwork carrying the signature of the artist and a serial number and a 50-ml. scent that can be refilled. A 10-ml. travel format with ceramic cap is also offered with a refill bottle at 150 euros. In addition to being sold online, the brand is currently available in perfumeries and fashion stores in New York, Palm Beach, Miami, Brussels, Cannes and at Sulékó’s showroom in Paris. 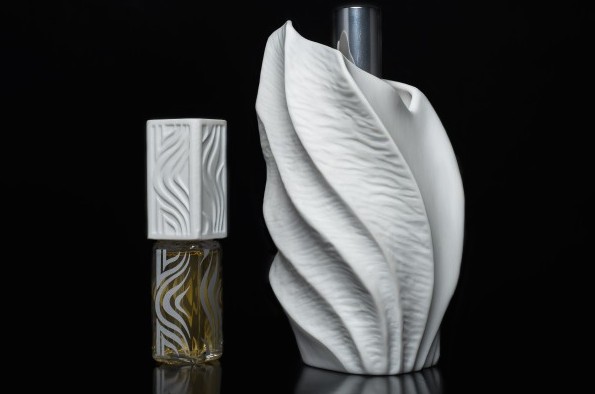 The founder and creative director of the Lyp beauty and lifestyle marketing agency Merav Vanounou also believes that educating customers is the only way to engage with them as she highlighted the importance of creating quality content to share on social media during one of the public talks hosted at the show.

“Don’t focus only on one channel, such as Instagram: I suggest you to have at least two but not more than four platforms to start with,” she said while listing a range of dos and don’ts in communicating with consumers. Among these, she suggested that niche players “not act as mainstream brands. That’s the biggest paradox: Most niche labels dream to be bought by big companies, but don’t try to be something you’re not. All the artisanal labels that were actually bought by big names kept their niche value throughout all the steps until at least their acquisition.”

According to Vanounou, in the moment of creating content, niche brands should focus on analyzing their audience; speaking with consumers in a coherent language across all platforms; favoring collaborations with artists to fuel the storytelling of the brand and its retailers, and building a community around the label, citing as a winning move Guerlain’s Olfaplay initiative inviting consumers to share podcasts about their olfactory memories.

In addition, Vanounou underscored offline’s key role in continuing the dialogue with consumers, mentioning her personal experience in retail as an example as she launched Individual, the first luxury niche fragrance boutique in Tel Aviv. “Educate your clients, teach them about certain ingredients, send newsletters or arrange in-store events setting appointments with famous perfumers or even influencers, so they will spread the word for you,” she said.

“I need to be online to [enable] people to know the brand and for the possibility of being interactive with consumers but I have to be in [brick-and-mortar] retail to offer the real olfactory experience,” said Anna Torrents, founder of Genyum, another brand that showed at Esxence for the first time.

Launched in December, the Barcelona-based label is available at the city’s Santa Eulalia luxury store but Torrents is in talks to expand in selective retailers in the U.S. and Far East. “This was a very productive show for us, there are people from everywhere so it’s really international. We got in touch especially with people coming from Eastern Europe, Russia, China and the Middle East,” she said.

The concept of the brand focuses on evoking the bohemian lifestyles of artists, whose professions lend the name for each scent, including “Painter,” “Ballerina” and “Sculptor.” “It took two years to develop this project but this is my passion, combining fragrance with art to pay homage to these visionaries and brave people,” said Torrents, explaining she has always been surrounded by artists and citing her father and husband among them. At Esxence, the brand presented three new fragrances, dubbed “Tattoo Artist,” “Writer” and “Musician” and each retailing at 155 euros for 100-ml.

“We’re not looking for distribution companies but for retailers, actually,” specified industry veteran Andreas Wilhelm, who was showing its Perfume.Sucks solo project. The name teases the fact that storytelling often prevails on the product itself, which “is a bit frustrating for a perfumer.”

“So we declare the whole formula on the bottle, ingredients and amounts, and if you have the ingredients you can also blend it yourself,” he said, echoing the label’s manifesto citing: “There is no story. They are the story. Transparent. Written on the bottle.”

Launched in 2017, Perfume.Sucks stood out at the show not only for its catchy name and ironic packaging — replicating a tube of toilet rolls — but also for offering edible perfumes. “A lot of our customers were a bit upset with us, they were thinking we were telling them their perfume sucks, which is not our intention. So how to be friends again? With candies, of course,” explained Wilhelm. The main accord of the candy revolves around orris, violet, vanilla and coconut notes, while the perfumer is working on another flavor to launch next year. 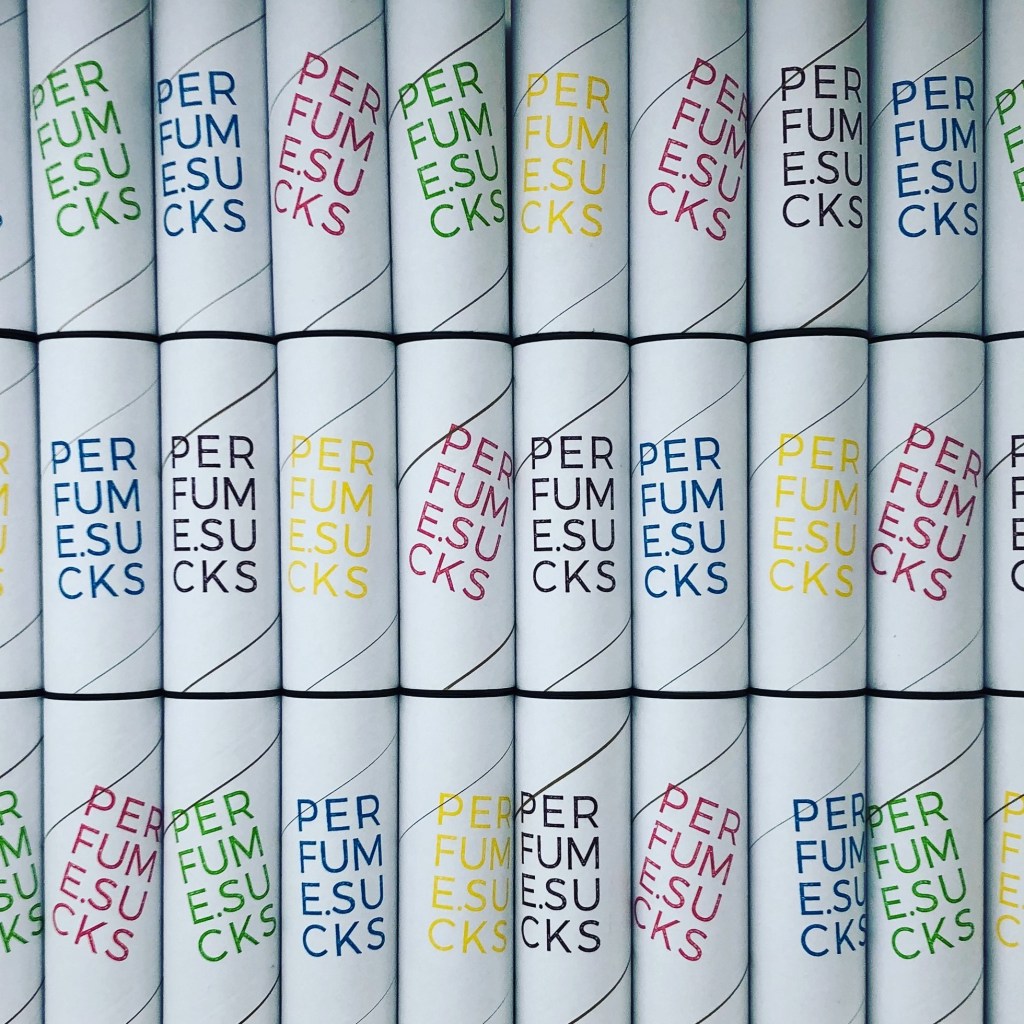 The agency’s founder Nicole Bordeaux — a former fashion model discovered by photographer Guy Bourdin — developed the first scented candle as a Christmas gift for her clients, and given the success of the product she decided to develop a six-item line, drawing on the therapeutic effects of medicinal herbs and plants.

The same scents and holistic approach — inspired by Bordeaux’s upbringing and time spent in her youth at hippie communes — were translated in essential aromatic oils sold with minimalist concrete bowls and natural lava rocks, which serve as clean and efficient diffusers and come with price tags ranging from $88 to $196. Perfume rollers in a black spiked packaging were also part of the line, contributing to the modern and edgy image of the brand, which has been sold at Bergdorf Goodman since November and will soon launch at Neiman Marcus and Saks Fifth Avenue. 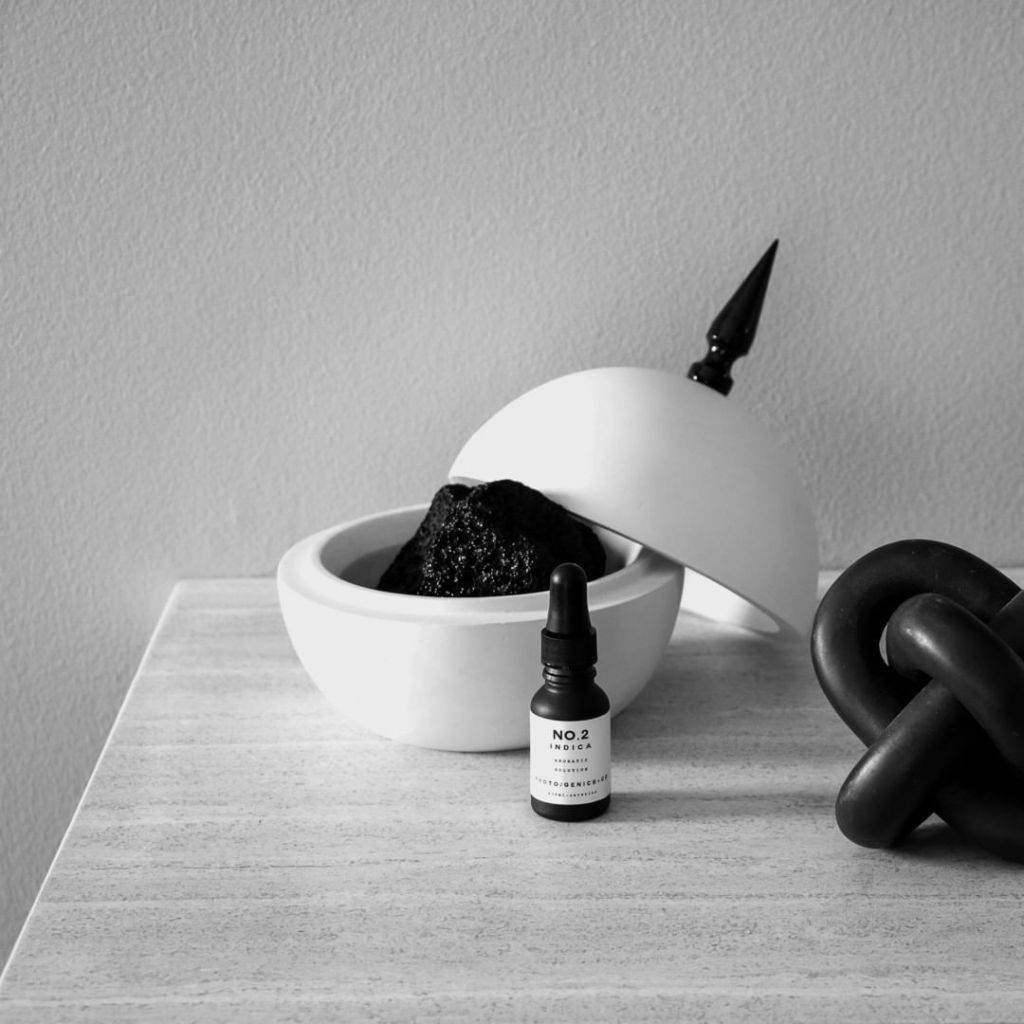 Stepping up its game, Esxence evolved its Esxkin corner dedicated to international indie beauty brands into a wider and separate area, dubbed “Experience Lab” and housed at Villa Quarzo, a four-story location a few steps away from The Mall. There, sustainable and natural products found particular resonance among the 44 brands showcased, with the Angela Laganà label stealing the spotlight for its innovative solutions, such as the Waterless hair- and body-care line offered both in fully recyclable aluminum tubes and in a completely water-soluble, single-serve format resembling a dishwasher pod. 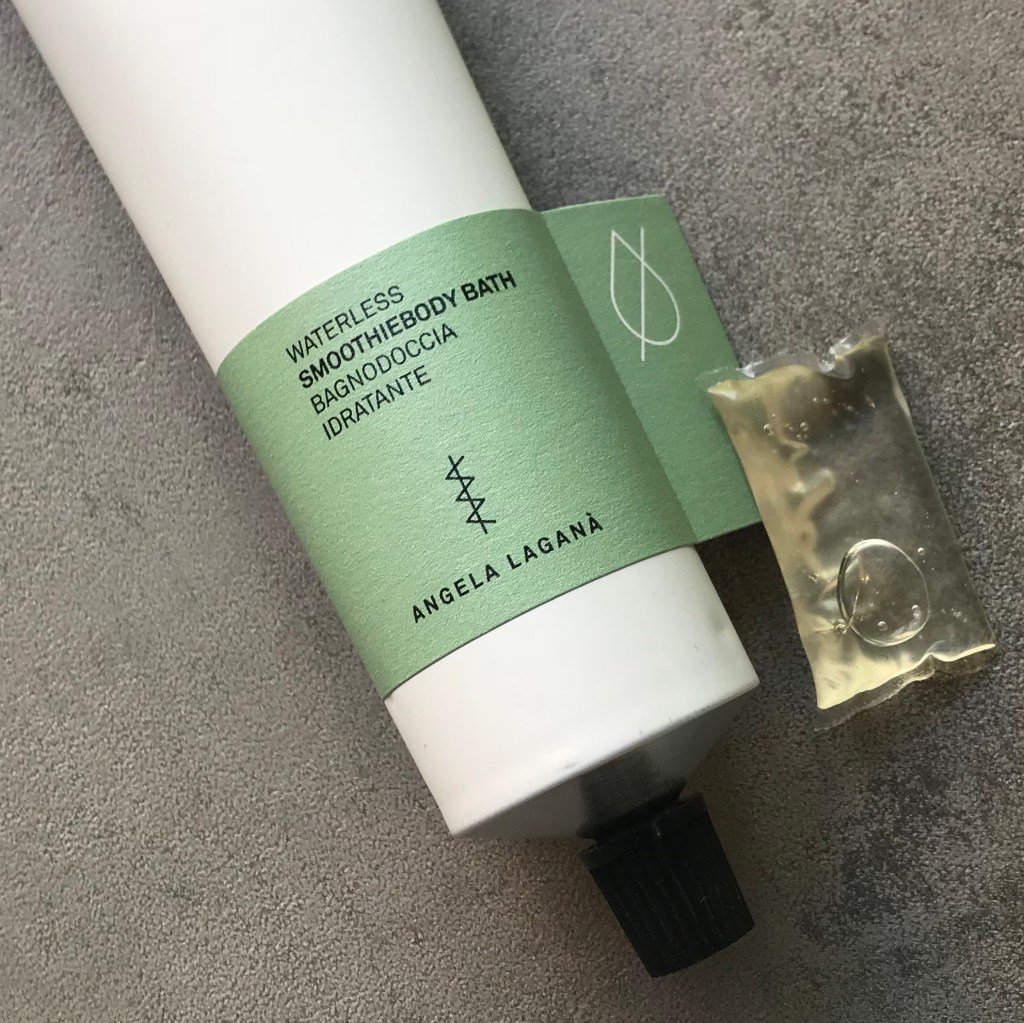 Other standouts included Swiss high-end and vegan skin-care brand Rivoli and Danish natural label Nuori, which releases fresh batches of products in small quantities every three months to avoid the use of preservatives and synthetic additives and therefore maximizing the efficiency of the active ingredients in the formulations. 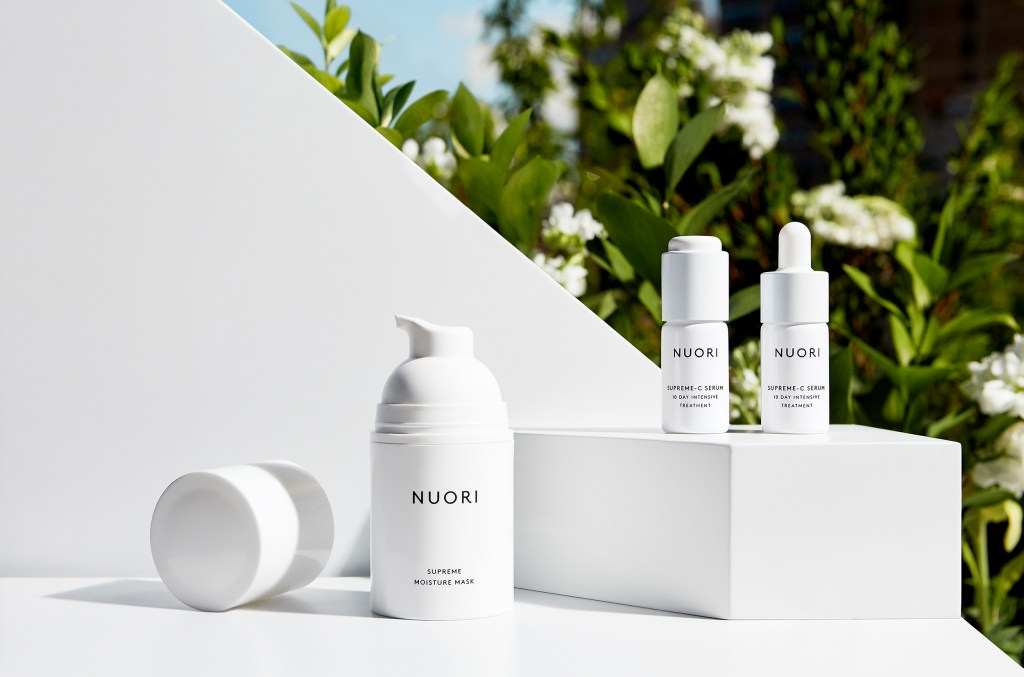 In addition to the trade show, various exhibitions, installations, workshops, concerts and interactive events were staged in the streets of Milan to further promote olfactory culture. Dubbed Milan Fragrance Week, the weeklong schedule of 25 initiatives involved names including Atelier Cologne, Rancé, the Merchant of Venice and Levi’s own Pérfume by Calé hosting events blending perfumery with art, music and technology at their respective stores in the Brera and Corso Magenta districts.