PARIS — Hugo Boss is taking a deeper dive into the women’s fragrance category with the launch of Boss Alive, starting in February.

“I thought this would be a good time, in 2020, because we celebrate the 20 years of Boss woman,” explained Ingo Wilts, Hugo Boss chief brand officer, referring to the brand’s women’s wear activity and the first Boss Woman scent.

“Time is changing, and if you see [the] Boss woman 20 years ago [versus] now, it’s a totally different woman,” he said. “Fashion has changed — it’s much more diverse, much younger and much more modern. You don’t have one stereotype of a woman anymore.

“I wanted something [by] women for women,” continued Wilts, of the new perfume project.

While the Hugo Boss brand does have feminine fragrances in its portfolio, including Boss the Scent for Her, Hugo Woman and Boss Ma Vie, Boss Alive marks the first time since 2012 Boss is launching a women’s perfume that’s not part of a masterbrand.

Today, 20 percent of the Hugo Boss fragrance business, licensed to Coty Inc., is generated by women’s perfumes. The Hugo Boss men’s scent franchise ranks in the top three in Europe, top five in Asia and first in the Middle East-Africa region.

“It’s a very strong brand when it comes to men,” said Simona Cattaneo, president of Luxury Brands at Coty. She views the brand’s relative white space in the women’s fragrance category, which overall represents two-thirds of perfume sales globally, as an opportunity.

“The Boss line is about feminine freedom. The concept of Alive is the idea that we need to live life to the fullest every day,” said the executive. “The campaign is centered on [that] very clear call to action.”

Boss Alive’s ad features Emma Roberts, Laura Harrier, Bruna Marquezine and Chloe Bennet, who were directed by Rebecca Zlotowski. The actors are shown in Los Angeles enjoying simple everyday moments — individually and together. They also sing parts of “What’s Up?” by the 4 Non Blondes in the spot. 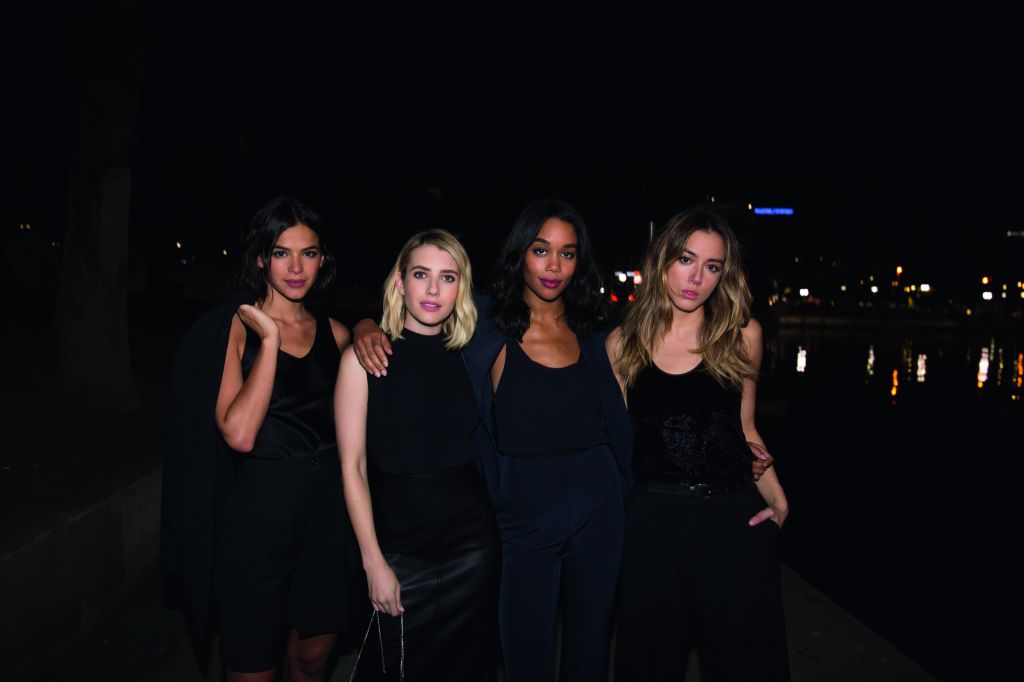 “There is an element of sisterhood among women that is coming out,” said Cattaneo.

“It’s not only seeing Boss as a business brand, it’s really seeing the brand is loosened up a little bit,” said Wilts.

Collier Schorr lensed each actress individually for the print ads.

“We also want to remind all women that what makes us feel alive is personal and unique to each of us,” said Cattaneo, who explained the campaign is “about empowerment of women, freedom and individuality — it’s really what every woman needs to feel alive but, at the same time, with a lighthearted tone that makes it very enjoyable.”

The fragrance bottle, meant to channel a strong femininity and wink to Bauhaus architecture, was designed by jewelry maker Amélie Riech.

Firmenich perfumer Annick Ménardo, who in 1998 created the Boss Bottled men’s scent, conceived of Boss Alive. Its notes include apple, blackcurrant and plum in the top; Indian jasmine sambac and thyme in the heart, and Chinese cedarwood, sandalwood and olivewood in the base.

The fragrance will first be sold in Russia, beginning Feb. 1. Then it is to be rolled out to markets including Germany, Spain, Benelux, Italy, France, the U.K., Latin America, travel retail and Australia on March 1.

To help celebrate the fragrance’s launch, a Boss Alive women’s wear capsule for pre-fall 2020 will be introduced in May. There will also be a documentary about the making of the Boss Alive perfume.