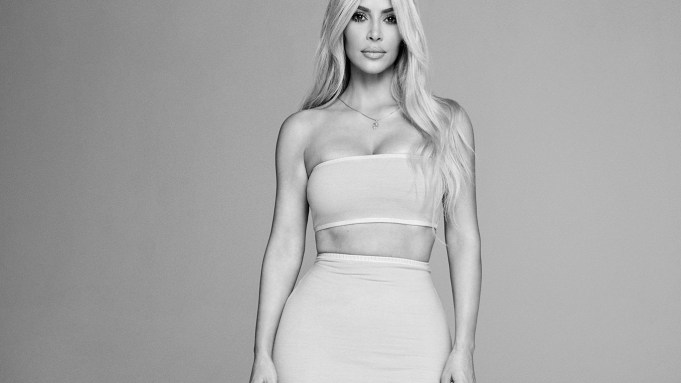 Kim Kardashian is about to turn the fragrance world upside down with the launch of her first direct-to-consumer venture in the category.

On Wednesday, the reality TV star and businesswoman will introduce the very first scents under her KKW Beauty brand, which since its inception in June, has focused on the color cosmetics category. The three eau de parfums, all based on Kardashian’s favorite flower, the gardenia, will be sold exclusively at kkwfragrance.com.

Kardashian said she was inspired by healing crystals, which she started to receive as gifts from friends following a robbery in Paris last year (where she was held at gunpoint). Developing the scents — Crystal Gardenia, Crystal Gardenia Citrus and Crystal Gardenia Oud — was about “being calm and healing,” which are the two words she used to describe a newly zen approach taken over the past year. The trio of fragrances, each housed in a slim, geometric frosted glass bottle that resembles a quartz crystal, will come in two sizes: 30 ml. and 75 ml., priced at $35 and $60, respectively.

But Kardashian’s massive Instagram following must act fast. The limited-edition fragrances are first come, first serve, which means once they’re gone, that’s it. Kardashian has no plans of replenishing stock once the collection sells through, she told WWD last week, revealing that there are plans to launch a second trio of scents in February, just in time for Valentine’s Day. These will have an entirely new concept and bottles, but that was all she would say about upcoming fragrances.

And similar to Kardashian’s previous KKW Beauty launches, the social media juggernaut is once again utilizing her strong following to reach a range of consumers.

“It’s the first time that a fragrance is really being sold with the model that I’m doing it at. It’s really just using online sales and doing it all digitally,” she said. There is one exception: The range will have a small off-line presence, to start, at Los Angeles-based e-commerce site Violet Grey’s store on Melrose Place.

Like her 20-year-old sister Kylie Jenner, Kardashian is angling to create a multihundred-million-dollar empire. The Kardashian-Jenners’ beauty businesses are going toe-to-toe with industry behemoths like L’Oréal, Coty Inc., Shiseido Co. and The Estée Lauder Cos. Inc., with single-day sales volumes and record sellout times that even the largest of legacy beauty brands can’t command.

Kardashian maintained that production for Crystal Gardenia is in line with her first two launches, meaning that 300,000 bottles will go on sale Wednesday — and will likely all sell out. If one averages price of the two bottle sizes ($47.50) and multiplies that by 300,000, the potential sales volume for her first day in business — or minutes, if they sell as quickly as the KKW by Kylie Cosmetics sets — is $14.3 million.

Though Kardashian has forayed into the fragrance world before through a licensing deal with Lighthouse Beauty, this time, the operation is wholly owned by the 37-year-old, who oversees every aspect of the process, from inception to final packaging.

“I just wanted a bottle that was so simple that can look like it’s something sitting on your counter and be a beautiful object. I tried to make it really timeless so that it can’t just all be about a celebrity fragrance,” said Kardashian.

Because of social media and the fan base she’s managed to cultivate and engage online, kkwbeauty.com’s fragrance sales at launch are expected to eclipse Kardashian’s previous endeavors in the space.

Compare Crystal Gardenia’s first day sale’s projection to a snapshot of her fragrance business in May 2012, less than a month after Facebook acquired Instagram for $1 billion and long before the app gained mass adoption (or even a version for Android users). At the time, Lighthouse Beauty was gearing up to release Kardashian’s fourth scent, True Reflection, where it was previously reported that the eau de parfum was projected to do $10 million in retail sales for the year, with her overall fragrance business on track to hit $50 million in 2012. Crystal Gardenia’s sales could eclipse the $10 million mark in less than 24 hours. Furthermore, at the rate Kardashian can move beauty products online, she could surpass the $50 million threshold in just four days of selling via her e-commerce site.

“Fragrance is harder [to sell], but makeup is difficult, too, because you don’t really test the product. I hope we’re doing a good job of describing what it will smell like, that’s always a little bit tricky,” Kardashian admitted.

She remains confident in her ability to sell Crystal Gardenia solely through her online channels. She’s done thorough research and culled data from enough focus groups to know what customers want.

“I do believe from the feedback that we got that it’s going to do extremely well. We do a lot of focus group and testing without saying what the fragrance is — and people always gravitate toward it,” Kardashian added.

She’s arguably the most famous Kardashian Jenner, and if any of the siblings’ brands are going to achieve commercial success, it’s likely to be hers. With the largest marketing platform of all on her side — 104.5 million followers on Instagram who watch her every move — she could never do a traditional ad in her lifetime and still outsell the majority of beauty brands in a competitive price range.

To read the full exclusive interview — in which Kardashian talks about how KKW Beauty and Kylie Cosmetics differ and how she uses each social platform to market her business — click here.

For more on the Kardashians and Jenners:

Kylie Jenner’s Kylie Cosmetics On Way to Becoming $1B Brand