The new feminine fragrance targeting Millennials and fronted by Zendaya is due out starting Aug. 22.

Executives at the L’Oréal-owned brand noted societal shifts among company employees and consumers, which inspired the project. Françoise Lehmann, general manager of Lancôme International, referred to a new generation that’s “in the midst of reshuffling the cards concerning the role of women, and that interested us.”

She said perfumes are often born from a change in society, and that these days a new generation of women is redefining what success means to them — achievement without sacrificing their femininity. Alongside thinking out of the box, they’re also sharing with others, according to Lehmann.

Therefore, Millennial women can be addressed differently than other generations, and Lancôme executives pondered how that could be expressed through a perfume.

“In each woman is an idol,” maintained Lehmann. “All women are idols.”

The fragrance’s moniker, which has a circumflex accent over the “o” as in Lancôme, was also chosen for its duality — power and softness. “It’s a name that resounds more than ever with a singular strength,” she continued.

Idôle’s bottle “was created as a totem of a new generation,” Lehmann said. Designed by Chafik Gasmi, it’s billed to be one of the most slender in the world.

Lehmann called Millennials “nomadic,” and it was with that in mind that Idôle’s bottle was developed as an object that can be easily carried and set down. The flacon’s circular indent on its middle nods to the “o” in Idôle.

Like for a cell phone, which has a similar shape to Idôle’s flacon, protective cases — with various designs — will be available for the scent. “We created an entire ecosystem around the bottle,” Lehmann said. “There will be cases on which we write mantras that correspond to the generation we’re addressing.”

The name Idôle isn’t sprawled across the flacon. Rather, it’s like a blank page, she said, on which Millennials are redefining the codes of their lives.

Ditto for the juice. Rather than sticking to a sweet register of notes often used in “addictive” scents, for Idôle, a trio of female perfumers envisaged an addiction of tomorrow that’s all about “clean.” “With an odor that is at the same time comfortable and strong, but also fresh,” Lehmann said.

Givaudan perfumers Shyamala Maisondieu, Nadège Le Garlantezec and Adriana Medina each focused on a different facet of the fragrance. Its composition has bergamot Italy essence and a pear accord as part of the top. Heart notes include a “clean and glow accord,” Isparta rose petal essence made for Lancôme and rose water, while base notes are comprised — among others — of Indonesia patchouli heart essence, Madagascar vanilla premium extract and musks.

Idôle was developed with the environment in mind. The rose petal used in its fragrance was sustainably sourced from Turkey through a community of women. Idôle’s bottle uses little glass and is rechargeable with a small fountain conceived for the project, for instance. 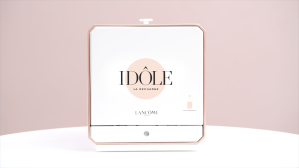 “Today, luxury is made to last,” Lehmann said.

Actress and singer Zendaya Coleman — aka Zendaya — is the face of the fragrance. “We were completely seduced by her,” Lehmann said. “She is a woman who perfectly incarnates this generation that has no taboo, is very optimistic about the future but is aware of what is at stake. [Zendaya] ticks all the boxes.”

The executive added Zendaya has phenomenal determination, is brilliant and ambitious. “She has a sense for everything that’s aesthetic, and has very intimate knowledge of what she wants to do,” Lehmann said.

At Lancôme, there’s an ambition to turn Idôle into another pillar for the brand.

While company executives would not discuss sales figures, industry sources estimate the new scent could generate $300 million in retail sales during its first year on counter.

Lancôme is one of the few brands successfully launching blockbuster perfumes today. Its La Vie Est Belle fragrance was introduced seven years ago with a happiness theme and fronted by Julia Roberts. According to estimates, the fragrance now ranks among the top three prestige women’s scents worldwide, along with Chanel’s Coco Mademoiselle and Dior’s J’Adore.