The brand is opening its first pop-up in Paris, where people can make their own scents and purchase the Scent Creator device.

Inside The Alchemist Atelier pop-up.

PARIS — Personalization and digitalization — two of beauty’s biggest trends today also happen to be two of the perfume industry’s prime pain points. But The Alchemist Atelier aims to fix that.

The new bespoke perfume brand from Noustique, a company born from the recent joint venture between fragrance and fashion firm Puig and home appliance manufacturer BSH Hausgeräte GmbH, is launching in tandem with the opening of its first pop-up in Paris today.

There, people can concoct their own fragrances with — if desired — the help of perfumery-trained “alchemists” and leave with the samples they created. On site, too, customers may buy the easy-to-use, speedy, app-connected device, called the Scent Creator, which allows them to make their own perfume anywhere. 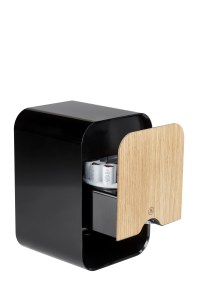 The project is the brainchild of Álvaro Suárez, a product design engineer with a hobby of making inventions. He now serves as Noustique’s chief executive officer.

“It is a disrupting solution for the market,” he said, of The Alchemist Atelier. It’s an idea Suárez hatched while working in BSH’s corporate innovation department, where he focused on how to provide value and technology for consumers, and new business models.

The thinking behind The Alchemist Atelier, according to Suárez, was “how can we provide the best fit in fragrance for every single customer.” It had to be a mix of virtual and brick-and-mortar, since selling fragrances online has proven tricky.

Upon arriving in the two-level, 890-square-foot boutique at 36 Rue Étienne Marcel, people first see the interactive Scent Wall chockablock with 34 essences — 16 bases, ranging from citrus to spicy, and 18 accords — all concocted with IFF perfumers.

The goal was to make it easy for perfume novices to create a scent they adore, but also give niche fragrance lovers the ability to develop the most eccentric concoction they want, explained Camila Tomas, general manager of innovation and technology at Puig.

“There are billions of combinations possible,” she said.

One can sign up online for discovery sessions and perfumery workshops, which take place one level down. There, up to six people spend an hour and a half with an “alchemist,” who gives an introduction to the various olfactive elements available and gets a sense of people’s perfume preferences.

Back up on the ground floor, people’s fragrance dreams can be made into reality with the help of The Alchemist Atelier mobile application. But first they choose which bases and accords to include, which can be tried out through Puig’s proprietary ceramic testers. Each corresponds to a nearby cartridge containing a scent, which is slotted into the machine.

Once the device contains the chosen cartridges, it sends the information to the app, which displays what the formula contains in two different formats — the Scent Wheel, organized by olfactive families, and the Scent Visualizer, involving photographs of the ingredients.

The various doses of bases and accords can be easily tweaked through the app, and then the formula is created within one minute.

After trying out a sample, someone can change the formula by adding or subtracting ingredients, or alter the scent altogether. The device saves all of the formulas for future reference.

The perfume-making machine sells for 599 euros and includes six 20-ml. cartridges of eau de parfum, a starter kit of sample bases and accords, and some small and large glass bottles, which are reusable. The cartridges alone retail for between 18 euros and 24 euros.

All those are also available on the brand’s web site for people in France. The next phase of the rollout after the Paris pilot (“to track the level of happiness,” according to Tomas) is expected to include the U.K. and U.S.

The Alchemist Atelier app enables the sharing of personalized formulas, which can be sent via WhatsApp and Instagram to others, or uploaded into the cloud for sharing and streaming (think Spotify). This can foster community-building, including co-creation.

Alchemists may be contacted for advice through the app, which will have more content added over time. Upcoming, as well, are other ingredients, such as mono scents. The Alchemist Atelier might have tie-ins with brands from within Puig, whose Puig Futures is a collaborative platform.

Puig lent its expertise on the fragrances and their marketing, while BSH Hausgeräte developed the Scent Creator, which Suárez, who worked with his team on the Alchemist Atelier’s digital solutions, called a “smart device.”

“We know what the customer is doing, in terms of blending fragrances,” he said, adding the data culled allows the brand to know and serve its customers better.

When Suárez arrived with his idea, Tomas said there was shock and excitement. “The main focus we had at Puig was how would we make a thing that is complex and technical easy to understand for people,” she said.

That involved creating a new language. “We did not follow any of the established rules on any account,” said Tomas, of the project overall, which includes perfumers, engineers and executives from Puig Futures.

Along with diving deeper into personalization and digital, The Alchemist Atelier brings to Puig the possibility of elevating gifting. Years ago, perfume was the gift par excellence, but was replaced by technological devices, such as iPhones.