The perfumer carries on the tradition of master perfumery first established by his father, Jacques. 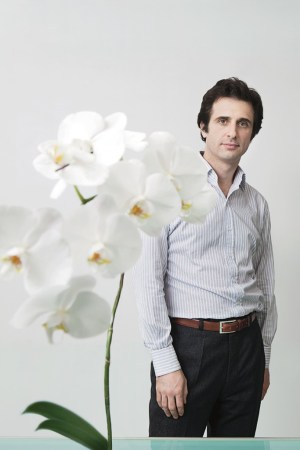 Olivier Polge may belong to one of the most esteemed families in perfumery — his father Jacques is Chanel’s in-house nose—but with a string of successes under his own belt, Polge has quickly made a name for himself as a leading perfumer of his generation.

Thus far, Polge, who works at IFF, counts among his hits Dior Homme, Viktor & Rolf’s Flowerbomb and Dolce & Gabbana The One for Men. Those successes seem only natu- ral for the 37-year-old, who can’t remember a time when he wasn’t aware of perfumery as a profession. “Often you can remember, because it’s such a rare métier,” he says. “For me, I cannot, since my father does the same job. And on top of that, since my father grew up in Grasse, many other people around us [were perfumers].”

Like his father, Polge was born in that southern French town at the heart of the perfumery industry. Before his birth, Polge’s mother—who herself trained as a perfumer at the now-defunct Roure Bertrand fragrance supplier— hopped on a southbound plane to be in Grasse. “She spent the last months of her pregnancy there,” says Polge, who otherwise grew up in Paris.

With a background like that, people could easily assume that the world of perfumery was integrally part of his life since birth. And for his part, Polge remembers “hundreds of small experiments,” small flacons of essence, littering the table in the entryway of his childhood home. But, still, there are precious few specific examples of perfumery playing a tangible role in his life until the age of 18 or so. Such memories come in flashes. One summer, for instance, Polge’s father wasn’t entirely finished with a fragrance. “I remember that he received a package, and we smelled, like, four or five experi- ments,” he says.

But otherwise, perfumery was rarely a family talking point. Polge says what his father did impart—ultimately more important than anything—“was everything else but perfumery,” a sensibility to the world. “I spent my childhood following my parents in art museums and in galleries, because they collected paintings,” remembers Polge.

Even today, when he sees his father, their conversation doesn’t generally broach the subject of their shared profession. “Maybe we’ll say, ‘Oh, did you smell the last fragrance that came out?’ or something. But it’s not an indepth exchange,” says Polge.

Despite his family history, no one assumed Polge would become a perfumer—least of all himself. Laughingly, Polge explains that when he was a teen, “I would say more that I was hoping to do everything else but that.”

Fast-forward to around the age of 18, when, after passing the baccalaureate exam, Polge had a month-long internship in his father’s office and realized that in certain ways perfume-making is manual labor. “I was seduced by this aspect,” he says. “I was in front of a scale, trying to mix ingredients.”

As much as he liked perfumery, Polge attended two years of university to study art history, which he decided wasn’t for him. “I wanted to do something with my hands,” he says, adding that one summer he tried bookbinding. “I like very much the craftsmanship aspect of things.”

At 20, Polge settled on his lifelong career. “I told my father that I wanted to become a perfumer,” he says, adding with a laugh, “He told me I was making a mistake.” not too much of a tussle ensued, however; it took just 30 minutes to change Polge senior’s mind, and—as it turned out—the timing was fortuitous. A friend of his had recently organized perfumery training for his daughter. Polge was to learn the art with her.

The first stop was at the former fragrance supplier Charabot “just to learn the raw materials and things like that.” At the time, the company had a factory extracting essences all year long.

“It was a very nice way to start,” says Polge. Then, Charabot had a room used as a perfumery school, where people from the company’s affiliates would learn about fragrance. While working through the whole perfumer’s palette, he came upon interesting raw materials, such as little-used Litsea cubeba.

Next up was a two-year stint at Swiss fragrance supplier ACM Parfums, where Polge got to try many elements of the perfumery business. “It was a very good way to learn, because in these types of small companies, if you need something you have to do it yourself,” he explains. “I learned more about how raw materials mix together.”

Afterward, Polge jetted off to IFF in new york. “Since I was coming a little bit from nowhere—they heard about my last name, but not about my experience—they took me as a trainee,” says Polge, who was mentored by Carlos Benaïm for a year or two. “I helped him with his small projects, and he showed me his way of working.”

“I find working with Olivier very refreshing,” says Benaïm. “He is not constrained by too many norms of the past. Olivier is very concerned about the quality of the ingredients he uses; as a good artist, he selects the best ingredients as a painter would select quality pigments. His style is direct, uncomplicated and to the point. Every ingredient has a role. It is a pleasure to work with him.”

Their first project together was Emporio Armani White for Men, and Polge has subsequently teamed with Benaïm and Dominique Ropion on other fragrances, such as Pure Poison for Christian Dior and Armani Code for Women.

For a shorter stretch, Polge worked with Sophia Grosman, and then little by little IFF gave him his own fragrance projects. “One of the very nice things about the beginning of my training is that it was this awakening and being much more open to all the things you could smell around you,” says Polge. After five years in new york, he returned to Paris (nine years ago now). Among other fragrances he has created solo that helped placed the Polge name firmly on the map are Guerlain’s Cuir Beluga and Balenciaga Paris. In 2009, he was awarded the prestigious International Perfume Award. Early this year, Spicebomb, another fragrance Polge created for Viktor & Rolf, made its debut. “We noticed with every project we are drawn to his unique scents,” says Rolf Snoeren, one half of the Dutch design duo making up Viktor & Rolf. “He has a complexity in his work that we find mysterious. We recognize his signature because of that. It’s never a one-dimensional scent.”

“It is interesting how we ended up picking his scents out of numerous proposals on several occasions,” continues Viktor Horsting. “We like his work; it is at the same time strong, elegant and unexpected.”

Horsting calls working with Polge “very pleasant, because he will go to great lengths to explain his ideas and as such make his work accessible. It is crucial to be able to have a discussion because even if we have some experience now, we are of course not professional noses.”

No small part of Polge’s job is “trying to understand people’s expectations with words,” he says. “Often, what is spicy for one person is not spicy for another. We don’t have a common language. It’s very intuitive, very subjective. you have to learn how to listen and speak to our customers, and to the brands with which we work.”

Personally, Polge loves woody notes, and also enjoys working with some spices, such as cardamom, for men’s fragrances. He often puts certain notes of violet or orris in juices for women. “I like patchouli very much, but also all the eau de cologne–type of notes,” he says, citing bergamot as an example. “I like simple notes.”

Press him on what he considers to be modern in perfumery today, olfactively speaking, and the answer is more complex. “There are different trends overlapping,” he says. For one, Polge notes a resurgence of chypre. “I have a hard time differentiating what is modern and what is not,” he says. “Often, modern things are a good revamping of something old.”

As a hobby, Polge enjoys music, especially classical, and frequents concerts. “I play the piano, but very badly,” Polge admits, adding that many years ago he played guitar. But no matter what he’s doing, perfumery is always at the back of his mind. “I like very much doing something you cannot see,” he says.

So would Polge suggest that his four children—three girls, aged eight, five and one-and-a-half, and a boy, who’s three years old—follow in his footsteps and be- come perfumers, too? “It’s too early to say,” he laughs. “They are way too young.” Sometimes, however, he has them smell certain scents. “It never goes very far,” says Polge, with a smile.