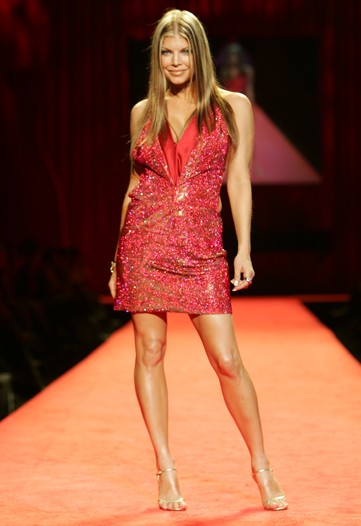 Avon Products Inc. has turned up the volume in the rising din of the celebrity fragrance fray by signing one of hip-hop’s hottest acts — Black Eyed Peas frontwoman Fergie.

The multiyear deal comes on the heels of a record-breaking 26-week run at number one on Billboard’s Hot 100 chart for the Peas’ “Boom Boom Pow” and “I Gotta Feeling,” and serves as Avon’s answer to last summer’s deal between Parlux Fragrances Inc. and musical heavyweights Jay-Z, Kanye West and Rihanna, not to mention Coty’s latest coup in signing perhaps the greatest prize, Beyoncé Knowles.

“I love the roster of women Avon has supported,” said Fergie in a phone interview from Auckland, New Zealand, where she just completed the Eastern leg of a world tour with the Peas to promote their latest album, “The E.N.D.” “Each one is completely different, but they are all wonderful, strong women who have a purpose. It was very important to me to bring what I have to the table. I’m a bit more rock ’n’ roll than some of the other artists, and Avon has really allowed my personality to come through.”

The yet-to-be named women’s fragrance, which will be available next year through Avon sales representatives, is scheduled to launch overseas beginning in the third quarter, followed by the U.S. next fall.

Avon’s wave of celebrity and designer alliances stems from the turnaround strategy the company unveiled in late 2005. Since then, Avon has nearly tripled its advertising spending to $400 million in 2008.

“The brand-reinvention strategy since the beginning of 2006 was about advertising, celebrity and designer endorsements, as well as a real commitment to [research & development],” said chairman and chief executive officer Andrea Jung. “[Those three elements] have helped to dimensionally step-change the brand image and to gain share. It’s one of the pillars of strengthening the brand.”

Jung said Avon’s celebrity strategy began in earnest when it signed Derek Jeter in 2006. Avon has since built its men’s grooming line, Driven, around the New York Yankees captain.

Explaining how Avon selects it high-profile partners, Jung said, “We are seeking partners who share the same core values of the company. Somebody who fits with the personality and culture of our brands, and more importantly somebody who will resonate with our customers and representatives.”

She noted Reese Witherspoon has worked to motivate representatives across the globe, making stops in Brazil, Japan and the U.K. Jung said they must also share in Avon’s commitment to philanthropy and be willing to lend their voice to the company’s causes, including its efforts to stamp out breast cancer and domestic violence. For instance, Fergie’s first order of business for the company will be performing at the annual Avon Foundation for Women Awards Gala on Oct. 27th.

“We are really excited about Fergie….She’s very inspirational and serves as a great partner on that front,” said Jung. “She’s strong, she’s vocal and in my own personal opinion she is an empowered woman who stays true to herself and is not afraid to state her opinion.

“With Fergie, we have the ability to reach a younger consumer base. She will appeal to not only those buying our Mark brand, but also our core brand.”

Fergie’s first brush with the beauty world came last year when she partnered with MAC Cosmetics’ Viva Glam campaign to raise money and awareness for the MAC AIDS fund. “It’s very important to me to work with a company that has supported real issues,” Fergie said. “It makes me feel like a better person when it’s not just about me.”

While the name and exact composition of the upcoming scent with Avon are still being finalized, Fergie described her debut fragrance as “fresh and alluring.” She hinted, “The vibe for the scent is for the woman who wears it to feel confident and not be afraid to be noticed.”

Advertising for the fragrance is being shot in Los Angeles today by photographer Mario Sorrenti. A global print, television and digital campaign is scheduled to bow next September. Avon executives said they will be targeting beauty and entertainment books as well as embarking on some new digital advertising initiatives.

“We sought Fergie for the fact that she was a diverse addition to our already diverse alliance strategy,” said Tracy Roe Haffner, Avon’s vice president of global fragrance marketing and strategic alliances. “We are not just looking for celebrities or designers; we wanted a wide range of equities that would appeal to people across the globe. Fragrance is about aspirations, and Fergie is a confident, sexy woman who is not afraid to be herself. She is a very global celebrity who is exciting to women everywhere.”

The new fragrance is one of many projects keeping Fergie busy this fall.

Having just competed the Japanese, Australian and New Zealand leg of a one-and-a-half-year-long world tour with The Black Eyed Peas, Fergie is also getting ready for the November premiere of her new film “Nine” where she will appear alongside Hollywood heavyweights like Penélope Cruz, Nicole Kidman, Sophia Loren and Kate Hudson. The songstress is also promoting her shoe line with Brown Shoe Co., which hit stores earlier in the year, and collaborating with former Guns N’ Roses guitarist Slash on two new tracks. “I’m working with Cypress Hill on one of the songs, and working with these people gives me a chance to explore another side of me, more rock ’n’ roll,” she said.

This weekend, the newlywed is looking forward to squeezing in some quality time with her husband, actor Josh Duhamel, whom she married in January.

“We’re having a romantic rendezvous in Oklahoma where I am opening for U2,” she said. “We’re actually both in high-work mode right now, which is very healthy. He is filming a movie in Atlanta right now, so I am usually waking up when he is going to bed.”

Fergie adds luster to Avon’s growing list of high-profile names — some of which, at first glance, extend beyond what may seem like a natural fit for the direct seller. Avon’s celebrity alliances also have allowed the company to raise the price points on its fragrances.

“We felt that a designer stable could help us to continue to elevate our share in mass premium fragrance and to elevate the [brand] image, and it has been an extraordinary success and we are extremely pleased with the fragrance business we’ve been able to grow year on year since 2006,” Jung said. “It builds image, it allows pricing power and there is a strong desire to buy a piece of celebrity,” Jung said. “These strategic alliances in my mind have step-changed our success in the category.” She added the each of celebrity scents have global reach.

BMO Capital analyst Connie Maneaty, Avon’s celebrity strategy, “adds a little sparkle, and it helps the brand profile.” Maneaty added, “There’s a positive benefit for the representatives, too. It makes the products easier to sell.”

Avon representative Marie Benoit-Wilcox of Irvington, N.J., said, “It’s a plus because it puts Avon in a higher class bracket.” Benoit-Wilcox, a top earner for Avon, added the celebrity name may get a customer’s attention, “and I can then introduce them to additional Avon product as well.”

As for whether Avon plans to scout more high-profile names, Jung said, “We will have a continued pipeline of designers and celebrities for the foreseeable future that will we add to the stable.”