Demsey is leading the biggest resurgence in fragrance creation at Lauder in years, just as the industry is undergoing a profound transformation. 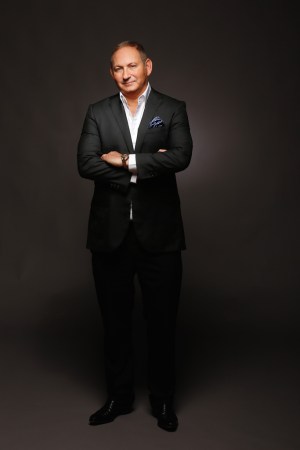 When John Demsey accepts his Hall of Fame Award at the Fragrance Foundation ceremonies tonight at Lincoln Center’s Alice Tully Hall, the group president of the Estée Lauder Cos. Inc. will be doing more than taking home a trophy.

He is leading the biggest resurgence in fragrance creation at Lauder in years, just as the industry is undergoing a profound transformation.

Demsey, who took command of virtually all of Lauder’s fragrance operations — including the Aerin business — a year ago, is commanding a fall launch schedule that touches every level of the business from niche to broad-based.

The architect of the vision, president and chief executive officer Fabrizio Freda, pointed out that fragrance is often the portal through which women enter prestige beauty. “We will place a greater emphasis and focus on the winning brands and more profitable and sustainable business models,” he said. “High-end artisanal fragrances are a growing segment, and we plan to lead its development with extraordinary brands like Jo Malone London, Le Labo and Frédéric Malle.”

Lauder is also looking to reignite scent sales for its biggest brands. “We will accelerate the fragrance business in our Estée Lauder and Clinique brands with high-quality initiatives, for example, Estée Lauder’s Modern Muse Rouge and Clinique’s Aromatic White fragrance,” Freda continued. “We will fully leverage the power of creativity and branding of our designer fragrance portfolio, including brands such as Tom Ford and Michael Kors.

“Consumers are developing higher expectations for the quality, the experience and the relevancy they want from fragrances — and we are going to tap into this secular trend,” Freda concluded.

Demsey, who helped Freda formulate his vision, is leading the charge. “John began his career in fragrance and has seen firsthand the evolution of the industry, including what it takes to play meaningfully and win in the category,” Freda said. “He is an excellent and proven brand- builder, capable of determining what it takes to deliver successful products.”

Freda added that Demsey’s “intimate connection to the fashion and pop-culture worlds, coupled with his expertise in understanding and speaking to aspirational consumers, make him supremely primed to lead the success and sustainable growth of fragrance.”

Leonard Lauder, chairman emeritus, who is considered to have written the book on modern marketing, asserted, “John’s deep understanding of the consumer and of our business is unparalleled. For close to 25 years, he has been a shining star at the Estée Lauder Cos. Inc. and I can’t thank him enough for all he has done for us. I congratulate him on this honor, and I’m so proud of him.”

William Lauder, executive chairman, added, “John’s been building, transforming and elevating iconic beauty brands for his entire career. In addition to being an incredible business leader, he’s a gifted artist and storyteller.”

Many in the industry identify Demsey with MAC Cosmetics and the seven years he spent building the makeup artistry brand into a global power, but he started as a fragrance trainee in Macy’s executive training program and moved swiftly through Bloomingdale’s before being named fragrance buyer at Saks Fifth Avenue. He served stints at Benetton and the Borghese division of Revlon, before joining the Estée Lauder brand as sales manager in 1991.

Despite his career-capping experience at MAC (“I got lost in the lipstick wars for seven years”), fragrance remained in his blood.

But while Demsey was at MAC, the prestige fragrance business imploded. “That was the period when Bath and Body Works and Victoria’s Secret exploded and the consolidation started taking place with big consumer product companies taking over. Fragrance brands started to wane and disappear,” said Demsey, who then ticked off a number of factors that have contributed to the decline of the category. “The consolidation of the industry, the rise of celebrity fragrance, the commoditization of the fragrance experience, the retail convergence of all the distribution channels with [department store] mergers and acquisitions, the promotional nature and gift-with-purchase orientation and value-set orientation — [these factors] fundamentally took a business that used to be wildly creative, very experimental and always profitable and made it something that really was a lot less.”

As the business grew less and less appetizing, even Lauder, which had built its early success on Youth Dew, became disenchanted. “We took a bit of a rest period as a corporation in terms of our point of view of the fragrance business,” Demsey admitted.

But feelings began to thaw, first when Gwyneth Paltrow did a star turn as the face of the Pleasures scent in 2005. Then, a platform was built for Tom Ford fragrances, beginning with Black Orchid about a decade ago. What followed was the Private Blend collection of high-end scents. The combination of limited distribution, luxury fragrances and high service was a success. “We hit a nerve,” said Demsey. “You had this notion of a niche-to-scale business model,” where an upstart fragrance launch could grow into a world leader like Thierry Mugler’s Angel. “There was a return to craft, experience, packaging and an elevated concept focused more on the product than the promotion,” Demsey said.

The proof is in the numbers: Tom Ford and Jo Malone are among the fastest-growing brands in the Lauder portfolio. Demsey did not elaborate on figures, but industry sources estimate that the Ford business is hovering at $575 million at retail and Malone is at $475 million.

But Lauder is not just focusing on the high-end niche market. “Fragrance is really a focus now for the corporation,” said Daniel Annese, global brand president of the Aramis and Designer Fragrances division, which is another part of Demsey’s sprawling turf. The company’s fragrance strategy is shaped like a pyramid. At the top are niche brands, like Frederic Malle and Le Labo; then the niche to scale, like the Tory Burch fragrance that has high productivity, and at the base are designer fragrances, heavily advertised fashion brands that can attract hordes of customers.

The king of this category is Michael Kors, who has more than 24 million followers on social media. “He has really tapped into what he created, which is jet-set lifestyle,” Annese said. Designer brands control 85 percent of the prestige fragrance landscape.

Annese cited the dictum of investing in designer brands that can offer the most leverage, while focusing on retail channels that are growing the fastest. “North America is our largest priority, next is the U.K., and the third is travel retail,” he said. As for emerging markets, Lauder is focusing on the Middle East, Turkey, South Africa, Russia and Latin America.

The social media power of fashion designers has helped provide insight into how to sell scent on the Internet. Not long ago, prevailing wisdom maintained that women would not buy a fragrance without smelling it first. “But we are finding that if the storytelling is compelling and she has an awareness of who the designer or the personality is, she is more willing to buy the line before she smells the scent,” said Annese.

Lauder will test that theorem with a number of launches this fall, including The Gold Collection trio for Kors — Yellow Gold, Rose Gold and White — all different scents relating to the subtle variations in theme.

In the Donna Karan franchise, DKNY’s Be Delicious is being relaunched and the company is offering Be Desired in October, created for a younger customer and designed to be “evocative and tempting.” On the Donna Karan couture side, two follow-ups to last year’s successful Liquid Cashmere are being introduced. There also is going to be action in the Tommy Hilfiger brand, with a new men’s scent called TH Bold. It will be heavily marketed to the Latin community with an ad campaign featuring tennis superstar Rafael Nadal, who has 19 million followers on social media. The fragrance will launch exclusively at Macy’s in August and roll out globally in October. Marni, Zegna and Tory Burch are also launching variations. When Demsey looks back, he must laugh at times. His road to marketing and management stardom had at least one bump. In the beginning, it was Rose Marie Bravo, now a Lauder board member, who recruited him for the Macy’s training squad.

“He clearly had the brain power for a big future,” Bravo said. “His curiosity, passion and attention to detail were evident at that interview and I predicted that he would be able to anticipate customers’ needs and wants, a necessary ingredient for a successful career in retail.”

But a subsequent boss felt differently. “I was deported out of my cosmetics assignment and sent to Park- chester in the Bronx, where I was in the Jordache jeans department,” Demsey recalled recently, noting his prime responsibility was locking up Sergio Valente Jeans, while the song “She’s a Maniac” from “Flashdance” played over the store’s eight-track system.

That was a far cry from now. “I’m living proof that if you stick to what you love and do what you feel good about, you’ll be successful at it.” Demsey could say the same for the fragrance business. “The industry is coming back. Sometimes you have to go backward to go forward,” he said. “The key life lesson that I learned from Leonard Lauder is that the answer is always in the room. The problem for the fragrance business was in the room. It was about the product, the experience. Focusing on selectivity and quality of distribution and uniqueness and being able to afford to take risks are what keep the business moving forward.”