An Emotional Evening at the FiFi Awards

Humor turned to pathos when Leonard A. Lauder stepped to the microphone to accept the Legacy of Excellence award given posthumously to the late Evelyn Lauder.

By Julie Naughton and Pete Born on May 22, 2012
View Slideshow 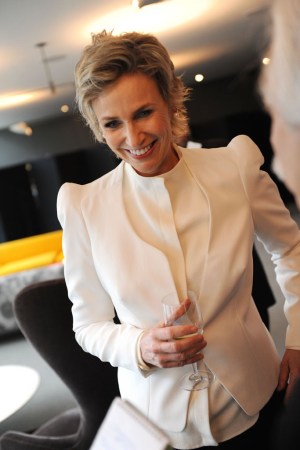 NEW YORK — Jane Lynch surveyed the crowd at the 40th annual Fragrance Foundation Awards, held Monday night at Lincoln Center, before pitching her own fragrance from the stage: “Because I play Sue Sylvester on ‘Glee,’ I think people must think I smell like a boys’ locker room,” said Lynch. “I would have loved to have made that fragrance, but unfortunately Kim Kardashian owns the copyright.” Neither did Marc Jacobs escape Lynch’s humor: “Why is it that singers always come out with fragrances, but Marc Jacobs has yet to drop an album?”

The anniversary event had its comic moments, including a prolonged technical glitch that provided a bit of impromptu theater. But the humor quickly turned to pathos when Leonard A. Lauder stepped to the microphone to accept the Legacy of Excellence award given posthumously to his late wife, Evelyn Lauder, who was senior corporate vice president of the Estée Lauder Cos. Inc. and founder of the Breast Cancer Research Foundation. After watching a tribute video, the intensity of feeling apparently proved too much for him and in stepped Karyn Khoury, senior vice president of corporate fragrance development for the Estée Lauder Cos. “What Leonard would like to say is thank you for this gift and this recognition,” said Khoury. “The love and the support that you have shown to us and to Evelyn means more than we can say. The pride Evelyn took in her success as a fragrance creator makes this evening and recognition especially touching and meaningful. We thank the foundation’s board of directors for taking a moment during this evening’s celebration to celebrate Evelyn’s unique vision and passion.”

Lauder then returned to the microphone, saluting the audience with, “You are carrying on her legacy. You are making women feel beautiful and be beautiful.”

Before the ceremonies started, Lauder spoke to WWD, recalling a time when he and Evelyn were in Europe and received a panicked call from his mother. “Mrs. Estée Lauder called and said, ‘Evie, I need your help. I have a bad cold, I can’t smell. We’re working on a beautiful fragrance. You have to come back to help me.’ And the rest is history. They worked closely together, loved fragrance, laughed a lot and it was a wonderful relationship. There’s a continuum in the family.”

Lauder also noted that, while he is the interim chairman for the BCRF, he believes a woman should head it up, and that he and the group are working to reinvent the organization. “Our great strength is fund-raising in the Northeast, but we want to expand into other areas,” he said, adding that there are plans to target corollary effects of breast cancer, any diseases to which survivors have been made vulnerable.

While this year’s ceremony included working electricity — a major problem at last year’s event — a computer crash left Nicole Richie and Cosimo Policastro, executive vice president of fine fragrances for Givaudan, struggling to fill space while a DVD copy of the presentation was being substituted. Richie — who earlier in the day had presented her first fragrance to beauty editors — confessed that the technical difficulties rattled her a bit. “I hate public speaking and wasn’t quite sure what to do when the presentation kept freezing,” a Pucci-clad Richie said with a smile at the VIP after party. “That was my worst fear, that something like that would happen.”

There was no shortage of lighthearted quips by celebrities, who were also sniffing around for possible fragrance deals.

“I don’t know if you’ve every smelled a recording studio, but tonight was a treat for my nostrils — an absolute pleasure,” cracked singer, actor and producer Josh Groban, who has just finished filming “Coffee Town,” a comedy in which he plays a disgruntled coffee barista “who’s really in a rock band, but he sucks, so he has to take the coffee job. I’m also four songs into the next album, and recently sang a duet with Placido Domingo for his new record.” Groban’s album is expected late this year or early in 2013.

Mariska Hargitay, clad in a peony-hued Oscar de la Renta gown, said her scent could be called Marish, her nickname, and smell of peonies. “If I come back next year, I’m going to do a French accent — I’m hoping they ask me to host it,” she said, complimenting the acceptance speech of Christine Dagousset, executive vice president of fragrance and beauté of Chanel and calling Dagousset her new muse. Hargitay noted that she has another year to go as Det. Olivia Benson on “Law and Order: SVU,” and that she’s itching to do a comedy. “I never thought this was where my career would end up,” she said of the police drama. “I’ve just had a 15-year delay on the comedy show. I got waylaid.”