The “After” lead actor and teen idol is the face of the new Salvatore Ferragamo fragrance for men, which will be launched next year.

MILAN — It took rising star Hero Fiennes Tiffin touching down in Milan for less than 48 hours to bring a ray of sun to the rainy city, although the British actor declined all meteorological credits quipping: “I most certainly didn’t bring it from London.”

Wearing an azure suit, white shirt and sneakers all courtesy of Salvatore Ferragamo, Fiennes Tiffin was announced today as the face of the brand’s new “Ferragamo” fragrance for men.

Although he achieved greater popularity as bad boy Hardin Scott in “After” — a role that earned him the 2019 Teen Choice Award for “Choice Drama Movie Actor” — Fiennes Tiffin was called to show different facets of his acting skills in the commercial directed by Gordon von Steiner and set to air in spring 2020.

The nephew of Ralph and Joseph Fiennes, the 22-year-old actor was destined for the big screen. His first role was a one-day part for a friend of his father — a cinematographer and writer-director — when he was 9 or 10 years old; his next part was playing young Tom Riddle in “Harry Potter and the Half-Blood Prince,” a role later portrayed by his uncle Ralph, while his mother Martha also works in the industry as a director, best known for her film “Onegin.”

But in real life, Fiennes Tiffin proved to be the epitome of a British young gentleman, dispensing smiles and signature deadpan jokes, and demonstrating why the Florentine fashion house continues to bank on his fresh image to expand its reach to a younger audience. To wit, he already appeared in Salvatore Ferragamo’s ready-to-wear advertising campaigns and closed the men’s spring 2020 show staged in June in Florence’s Piazza della Signoria. 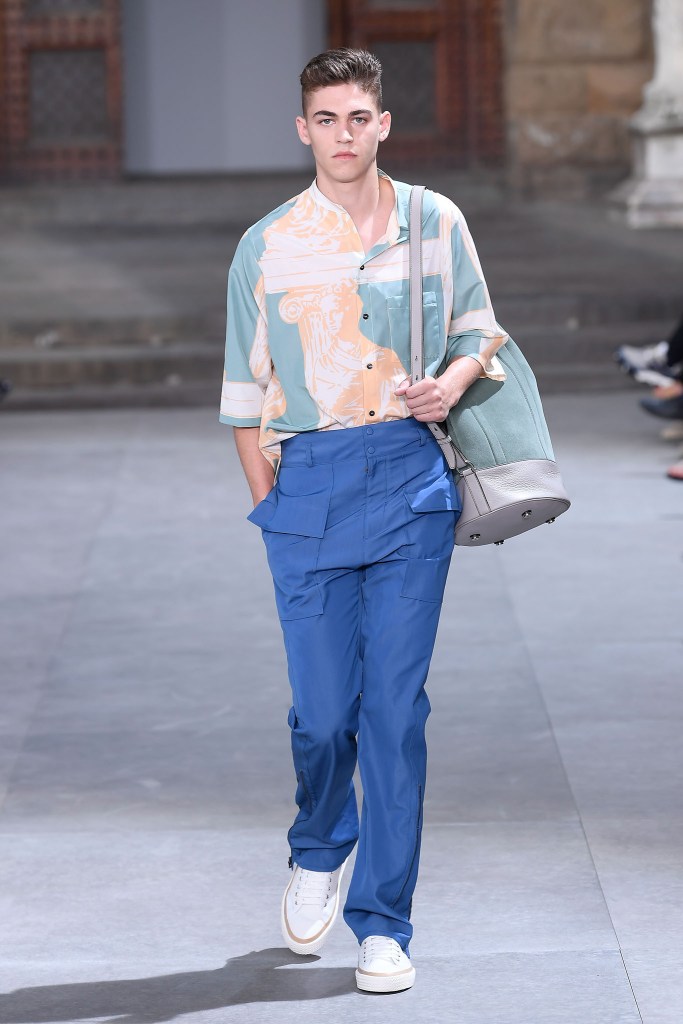 Fiennes Tiffin sat down with WWD to dish about his relationship with the Italian brand, the power of scents, his future acting projects and the one, very familiar director he would like to work with.

WWD: Let’s start from your relationship with Salvatore Ferragamo. What is it that keeps drawing you to this brand?

Hero Fiennes Tiffin: I don’t know, I love it but I can’t really say why they want me back [laughs]. No, I’m so happy to be part of Ferragamo and so flattered of how close the whole family is and I think I’ve been like to four or five shows and now it just feels like fun, like an “I’m going on a trip with friends” kind of thing. To work with Ferragamo quickly became very comfortable and fun.

WWD: Can you give us any insight or tell any behind-the-scenes anecdote about shooting this campaign?

H.F.T.: We shot in a bunch of different locations around the same area, we had really good luck and a nice strategy with sunrise and sunset, so we got a bunch of different lights to play with, so we have a really nice variety of shots within there. I don’t know whose idea was to save the cold water shot for last, but fair enough. [laughs] But no, that was fun, it was just funny trying to look comfortable and relaxed when you’re freezing on a rooftop in a certain way, but I think we managed to do it and it was a really fun, different, well-executed shoot.

WWD: Where did you shoot it?

H.F.T.: There are fewer lines I need to learn [laughs]. It’s funny actually because I think I have done two commercials and both of them have been — luckily for me — very acting-based, and I was playing an actor in this one and still acting in the other one. So I feel like I have had a kind of unfair experience, because mine feels probably more similar [to acting in movies] than most commercials and adverts do, so thank you Ferragamo for making it so easy [giggles.]

WWD: What’s your relationship with scents? Do you have a memory linked to the first scent you ever smelled?

H.F.T.: Yeah, scent is so crazy, how it taps into your nostalgia and is reminiscing. There’s a classroom in my old school that had a certain smell to it and it was a year-six classroom, and there was only one, small, year-six class and every few years me and my friends would have to go back to that classroom for whatever reason and it would always be, “Oh, my God, its smell, do you remember when…?” It’s funny how smells like that bring back memories.

WWD: Do you have a favorite smell or scent?

WWD: What about your relationship with fashion? How would you describe your personal style?

H.F.T.: I don’t know how I would describe my style. I’d say more minimal and sleek. I love doing work where I wear the kind of clothes that I wouldn’t necessarily wear [every day] because I may learn that I was too close-minded to realize how much I love that kind of thing. So it’s nice to jump around and kind of like just wear tracksuits at home, then [wear] really lovely and amazing clothes in amazing places like this and then wear crazy different clothes for crazy different characters when I’m acting. I feel like fashion for me, it’s more than what I just want to wear, it encapsulates more than just that.

H.F.T.: Right now, I’m lucky to be at a stage where we are kind of deciding the next steps, but we just finished shooting “After 2” and that should come out sometime next year. I’m at a really nice stage where I now have a bit of time in between to really look and land other projects, we’re talking about some really exciting ones, so hopefully I will have some good news for you soon.

H.F.T.: Obviously the classic greats, but I feel I would like to stick with my mum. I’d love to do something with my mom directing it.

WWD: Let’s also talk about your role as teen idol. You have a great following on Instagram — does this popularity affect you in terms of content you post or roles you accept? Do you feel any extra pressure?

H.F.T.: When it first happened, so suddenly, it was quite overwhelming and I thought “Let me just work and I will deal with this other thing later.” And throughout the press tour it was very, very overwhelming and it took a while to adapt but now I’m definitely in a position where I feel like I can go back on [Instagram] freely. It’s kind of changed, because Instagram used to be just for me to see what my friends were doing and showing what I was doing, and now it’s a completely different platform for me. So it took some time to adjust but now I’m very comfortable, I love the support. It’s a different game but I’m here to play it.