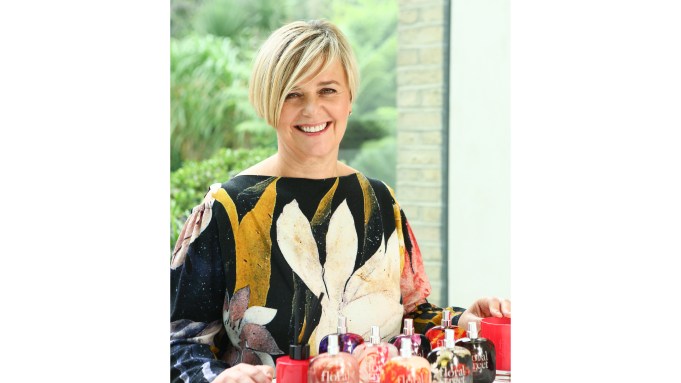 LONDON — Michelle Feeney is back in the beauty arena with a built-from-scratch fragrance brand created with a young audience in mind, a flagship set to open in Covent Garden in mid-November and a mission to educate a new generation, WWD has learned.

Floral Street launches at Harvey Nichols in London and online this week, offering eight floral scents created by the perfumer Jérôme Epinette and produced by Robertet. The collection plays in the premium space with prices that range from 12 pounds for a discovery set of eight fragrances to 55 pounds for a 50-ml. bottle.

“I realized there was this massive gap between Lush and Jo Malone, and I wanted to offer fine fragrance at an affordable price, in a different way, to a younger customer,” said Feeney, who’s clocked 30 years in the beauty business, working for companies including the Estée Lauder Cos. Inc. and PZ Cussons.

Surrounded by pebble-shaped bottles of the fragrances during an interview, Feeney said there may be many niche fragrances out there, “but their starting price point is really high. And then there are great bath and body things, but there was nobody who was speaking to a younger customer. Having a son who’s 24 and a daughter who’s 13, I thought, ‘We’re missing a beat with fine fragrance.’”

There’s an eco-angle, too. Floral Street has no excess packaging — such as cellophane wrap — and the boxes are made from white pulp. They are recyclable and can be repurposed for storage or as a seed tray. Each glass bottle showcases an original flower mural by the photographer Matthew Donaldson, and they will eventually come with screw caps so they can be refilled or repurposed as vases.

Feeney said she wants her customers to become “connoisseurs” of fragrance, and to that end she has been training her salespeople to do more than just spritz and sell. “They are all getting properly trained in order to make fragrance a very viable part of a young person’s life,” said Feeney.

The 650-square-foot store, which will be located at 30 King Street in Covent Garden (near the actual Floral Street), will have a table in the center where three raw ingredients from each fragrance will be available to sniff. Salespeople — wearing Giles Deacon-designed aprons — will be prepared to talk to customers about the notes and how they combine to make a fragrance.

She called the store concept “fluid and evolving,” and said it will host live events around the nuances of smell, or how to choose a fragrance for somebody else.

“I want to try to do for fragrance what MAC did for the makeup artist, which is to bring an engaged, interested person into the mix. I’ve actually hired makeup artists because they are engaged in learning. What I’ve realized from all my time spent with makeup artists is that they really love fragrance and they want to know more.”

At Lauder, Feeney worked chiefly with Crème de la Mer and MAC before returning to the U.K. as chief executive officer of the tanning brand St. Tropez. She later created and helmed the beauty division at PZ Cussons, where she oversaw St. Tropez, The Sanctuary, Charles Worthington and Fudge hair brands.

She left Cussons in 2015, and was keen to make a comeback with a brand of her own. She is backing the venture with no outside investment — and has total control.

“It means I can do things differently, and I’m not having to pay homage to a shareholder. I can take as many risks as I like — and live with the consequences — because these are my decisions and this is what I want to do,” said Feeney. “I’m scared to death at the same time. It’s completely my work of art — I want it to be successful — and it’s thrilling to be doing something new for the industry as well.”

A bath and body range is set to launch in the spring, while candles, diffusers and scented notebooks will also be part of the merchandise mix. Feeney said she’s working on building wholesale distribution, including the U.S. and Canada.

“We will be looking to globally roll out over the next two years. In Britain, we really want to do a mix of our own store and department store and web, obviously, and e-commerce. I’d like to speak to Asos, too, as they’ve been expanding their beauty, and they’ve got a younger customer,” she said.

Prices range from 22 pounds for a 10-ml. purse-size spritzer to 55 pounds for a 50-ml. bottle. The starter sets, which each contain four 10-ml. fragrances, cost 80 pounds while a discovery set of eight 1.5-ml. bottles costs 12 pounds.

Revenue in the first year is expected be 2 million pounds.

Feeney said the fragrances are inspired by London’s ethnic and cultural diversity, and most have been built around a single flower. Names include Wonderland Peony, Neon Rose, London Poppy, Wild Vanilla Orchid, Iris Goddess and Black Lotus.

Even those juices that don’t have a flower in the name have one or more in the bottle. Ylang-Ylang Espresso is a blend of red rose, ylang ylang, jasmine and coffee, while Chypre Sublime is made from damask rose, violets, patchouli and geranium.

Daniela Rinaldi, group commercial director for Harvey Nichols and the woman who built up the store’s beauty and fragrance business over the years, called Floral Street “fun and irreverent. Michelle and her team have created a comprehensive collection of floral scents that brings to life the British sense of style; individual, spirited and modern.”