The nearly $3 billion American industry has bet all its chips on this weekend in hopes of igniting a last-minute sales rally. 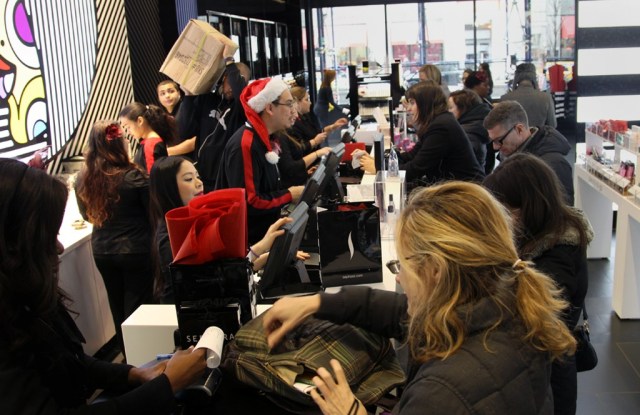 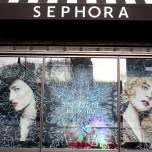 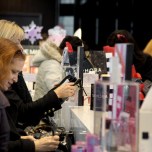 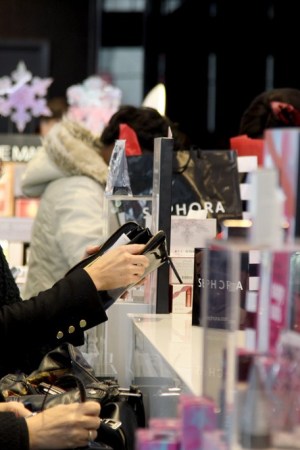 The nearly $3 billion American fragrance industry has bet all its chips on this weekend in hopes of igniting a last-minute sales rally to save a category that has been teetering on the brink in recent weeks.

“It’s going to be a nail-biter,” said Karen Grant, vice president and global industry analyst at The NPD Group Inc. “It’s going to come down to the wire for December — this week and next.”

Devastated by Hurricane Sandy and traumatized by the Newtown, Conn., tragedy, shoppers have been given even more reason to procrastinate, in addition to the calendar shift, which has made for the longest shopping season in years.

All of these factors have produced a cliff hanger. The tension is so great and the sweating is so profuse that not even major manufacturers would speak for attribution. “Saturday will be at a fever pitch,” said a influential manufacturer. Another major vendor chimed in: “Every retailer I speak to is cranky and not saying much. I’ve never seen such tight-lipped panic.”

Little wonder. The manufacturer estimated that fragrance sales were down 11 to 12 percent last week across the U.S. department store universe, and this week will be “challenging” also because Sunday, a key shopping day, will be counted in next week’s figures.

More than any other beauty category, the health of the prestige fragrance business ­hinges on the holiday-selling season. The category got off to a slow start: NPD’s preliminary, raw data indicates that the prestige fragrance business nationwide was down 4 percent for the two prior weeks, after finishing November behind 1 percent. But the bleakness can disappear. “What we are seeing right now can all change based on what happens this week and next,” Grant cautioned, noting how volatile and late-forming the business has become. She said 20 percent of the fragrance sales for the entire year — or $1 in every $5 — is made in the last 10 days before Christmas. One manufacturer stated that the 10-day window before the holiday generates as much in sales as September, October and November combined.

In the wake of the devastation of Hurricane Sandy, fragrance sales were down 3 percent during the first two weeks of November, but then the figures rebounded and the category finished the month only 1 percent behind last year. The business could also regain strength this month, Grant said, but the resurgence would be modest: “It is looking like, at most, it could be 2 percent [ahead] if we see a huge rally in the next week and a half.”

It is possible, she noted, if there is a last-minute upsurge in perhaps the celebrity business, which is prone to last-minute gift buying? Grant said the phenomenal success last year of the two top celebrity scents — Justin Bieber’s Someday and Taylor Swift’s Wonderstruck — which both broke into the top 10 for the fall season, made comparisons difficult for those that followed this year. There’s no shortage in product launches this year — in every category. “We are seeing more newness,” Grant said. “But it’s not coming through as much. [Newness] is not driving the action and sales as strong as last year.”

In fact, classic brands continue to power the market. In the men’s category, there’s only one new entry, Mont Blanc Legend from Inter Parfums Inc., in the top 10 so far for this season. Meanwhile, the women’s top 10 remains unchanged at this point in the season, without newcomers to the usual stable of classics, Grant noted. Some launches — Bieber’s Girlfriend, Lancôme’s La vie est belle, Marc Jacobs’ Dot and Nicki Minaj’s Pink Friday — placed in the top 20 so far for the season, according to NPD’s raw preliminary figures.

Carrie Mellage, director of consumer products at Kline & Co., observed, “Our sense so far is that it has been a fairly weak year. We’ll probably see a moderate increase.”

She noted that last year, the fragrance business had a sales pickup of 4.2 percent. “I don’t think we’ll see it that big for 2012,” she speculated.

One major department store retailer noted that business had been good through October. “With all the disruptions in November, how can we get back to where we were in the third quarter? That is the big question,” said the retailer, who, like others, spoke only on a not-for-attribution basis.

One manufacturer, referring to Macy’s decision to keep stores open around the clock this weekend, quoted one of the executives there as saying, “We’re running a 63-hour One-Day Sale.”

The manufacturer, however, speculated that the fragrance category could rally and eke out a 3 to 4 percent increase for the season.

Another fragrance vendor, who quoted colleagues as expecting a 3 to 5 percent increase, said consumers have stopped procrastinating and he predicted that this weekend will be crunch time. It will just be an exercise in waiting on customers and running the cash registers fast enough.

This season, smaller specialty stores and regional boutiques seem to be fairing better than their larger, department store counterparts.

At Sephora, shoppers are zeroing in on gift sets, men’s fragrances and indie cosmetics, especially in the nail category, said Margarita Arriagada, senior vice president of merchandising for Sephora Americas. “The strength we have seen in value sets has continued to grow this holiday season, across categories.…Our top sellers have included multibranded Sephora Favorites kits, including for lips, fragrance and our newest addition, the Draw the Line Eyeliner set.” Arriagada added that makeup multipalettes have been big sellers as well. She noted that this year customers have been drawn to smaller niche brands like Ciaté, Bite, Disney and Josie Maran. “We have also experienced a steady pickup in BB Cream performance from our color brands,” she said, adding, “Our nail business is very exciting this season, driven by new offerings from Ciaté and our exclusive OPI Gel Kit.” On the fragrance front, Arriagada said it’s been a blend of “classic and emerging picks” that have been resonating most with customers. “Our top [fragrance] brands have been Viktor & Rolf, Chloé, Chanel and Marc Jacobs. In addition to the success of men’s fragrance gift sets, we are finding Viktor & Rolf Spicebomb, Hermès and YSL ranking well,” said Arriagada.

At Bergdorf Goodman, high-end fragrances are driving sales, including Maison Francis Kurkdjian 754, the Hermès Lock Travel spray, Balmain Ivoire and YSL La Collection. Another “stellar performer” at the department store is Dior La Collection, a line of oversize, raw-material-based scents for men and women, said one source at Bergdorf.

Marla Malcolm Beck, chief executive officer of Bluemercury, said she’s seeing robust sales. “We took a risk [this year]. We decided to step on the gas in terms of inventory and we’ve gotten the benefit of being superstocked. We’re having a phenomenal year.” Brisk sellers at Bluemercury include makeup and antiaging skin-care sets. In makeup, classics such as Bobbi Brown Bellini Lip & Eye Palette for $75 and its exclusive Trish McEvoy palette for $148 (an annual collaboration between the makeup artist and Beck), are taking center stage. On Tuesday, Beck said Bluemercury had sold through 90 percent of its holiday makeup palettes. She also nodded to high-end skin-care sets, including the La Mer Collection for $285 and the $550 ReVive Art Box.

Von Maur, an Iowa-based department store chain, is posting double-digit gains in fragrances and a high-single-digit jump in color and treatment, said Joy Place, vice president of merchandising. “We’re doing best with color and newness,” said Place. “Nails have been insane — more than double. It’s nice to have something new that enhances the department, like Ciaté’s Velvet Manicure.” The standouts in fragrance include Coco Mademoiselle, Chanel No.5, Flowerbomb and Angel in women’s, and Bleu de Chanel, Spicebomb, Montblanc and Acqua di Giò in men’s.

Skin care is driving increases at Balliets in Oklahoma City. “Our [beauty] business has been on fire all fall, driven primarily by high-end skin care like Natura Bissé, our fastest-growing line, Darphin and La Mer,” said Bob Benham, owner of Balliets. He noted that cosmetics are up 32 percent and fragrance is up 16 percent this month.

At Stanley Korshak in Dallas, customers are responding to fragrances like Hermès’ L’Ambre des Merveilles and men’s Moonshine cologne as well as classics including Chanel No.5 and Coco Mademoiselle, said beauty buyer Mary Blakely. But with less fragrance launches to spotlight, the retailer’s fragrance business is flat and cosmetics are inching ahead, she added.

A number of retailers have named beauty devices as the standout category this holiday.

Erin Dominguez, marketing assistant at Planet Beauty, the 31-unit beauty chain based in Costa Mesa, Calif., singled out Clarisonic’s $119 Mia as a brisk mover. The Clarisonic item also is proving to be a “big hit” at Pharmaca, said Tiana Ukleja, the retailer’s category manager, health and beauty.

TV shopping retailer QVC began its holiday blitz in November, with special offers and pricing throughout the month on about 50 key items, said Claudia Lucas, director of beauty merchandising at QVC. “Beginning in November, all of our Today’s Special Value beauty offers leading up to Christmas have targeted gift-giving. For the season, we had strong offers from Sephora, Philosophy, Clarisonic and L’Occitane,” said Lucas. She added color cosmetics and bath and body have been strong and its beauty device business has been “outstanding.” Lucas singled out the Clarisonic cleansing system, the NuFace Trinity At-Home Microcurrent Facial Toning Device and the PaloVia Skin Renewing Laser as holiday standouts.