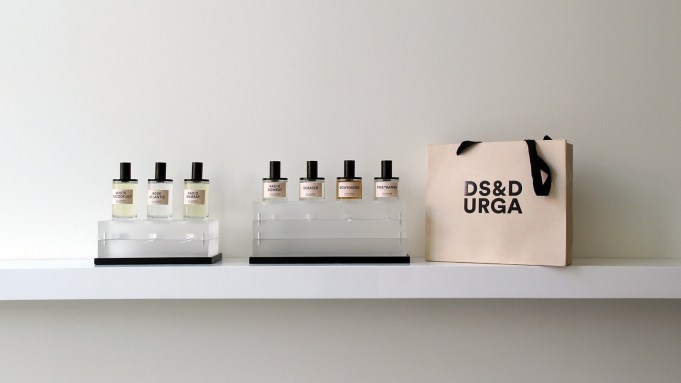 Fragrance line D.S. & Durga is bolstering its brand with a three-scent launch, new retail outpost and new counter at Barneys.

The minimalist retail location opened by appointment on July 25, and will welcome the public on Saturdays in September, according to D.S. & Durga’s husband-and-wife cofounders, Kavi and David Moltz. The long, narrow display space features the entire brand lineup in one place — plus collaborations and fragrances that David, the brand’s nose, is tinkering with on an ongoing basis. The store also houses a studio, which David has used to work on fragrances for roughly a year.

“Here, we have everything,” he said. “You can see the things I’m working on…you can get a real taste of the whole world and be walked through it better than anywhere else. We’re also opening a downtown Barneys counter, so we’ll have that outpost in Manhattan, and we’ll have this.”

“We really want to focus on being able to explain the fragrances the way that we want,” Kavi added.

The couple founded the brand in 2008, after David started experimenting with making homemade aftershave and other products as gifts for friends. D.S. & Durga launched at Barneys in March 2015, and is set to open its own counter in the downtown store on July 31. “We sell at Barneys but not other big stores, just boutiques…the kind of stores our friends were owning when we started this.”

The couple is expecting both the Barneys counter and the retail opening to contribute meaningfully to sales, though they declined to disclose precise figures. The brand is projected to grow 40 percent year-over-year for 2016, and expanded 33 percent in 2015. That growth has come without any outside funding.

“It’s sort of like a deconstructed sandalwood — it’s this idea of a little radio made of sandalwood and the hot copper tube heats it up. And as it heats it up little puffs of the pieces that make up sandalwood come out,” David said of Radio Bombay. “It’s pretty unisex.” Each of the new scents is available in a 50-ml. or 100-ml. size, retailing for $175 or $260, respectively.

The fragrances are housed in D.S. & Durga’s new packaging — featuring custom debossed caps and collars in anodized aluminum. The bottles come in architectural paper boxes with liner notes. “You’re getting as much information as possible about the fragrances,” David said. “You can get as into the fragrances as you want to — know why I made them, and the story that’s going on.”

More fragrances are in the works, according to the duo. And pocket perfumes, the brand’s take on rollerballs, are slated for later this year.