By Brid Costello and Jennifer Weil on September 4, 2009
View Slideshow 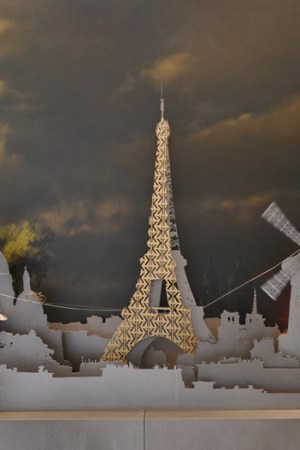 Its 25 products comprise everything from eaux de toilette to scented bubbles to textile cleaning products, with each meant to play a part in perfuming a person’s life 24 hours a day, seven days a week.

“The inspiration is Paris,” said Francis Kurkdjian, referring to the products’ packaging as well as the namesake boutique. “It’s the roofs in zinc and the golden domes.”

During his career, Kurkdjian, a perfumer at Takasago, has mixed fragrances such as Jean Paul Gaultier’s Le Mâle, Acqua di Parma’s Iris Nobile and Giorgio Armani’s Armani Mania, plus bespoke scents for private clients, among other projects.

“The idea of the store was to create a Parisian-style gallery, where you feel as if you were inside and outside at the same time,” explained Marc Chaya, chief executive officer of Maison Francis Kurkdjian.

Designed by Kurkdjian and architects Yann Le Coadic and Alessandro Scotto, the 390-square-foot store in Paris’ first arrondissement is a mix of classical and high tech.

Fragranced bubbles waft intermittently from outside the boutique’s street-side entrance. Through that, there’s a covered hallway reminiscent of an old-time French galerie, where, at the end, there is a fountain with scented water.

Set designer Jean-Hugues de Chatillon created the Parisian cityscape along the walkway’s left-hand wall. The whimsical silver- and gold-hued silhouette of Paris includes key monuments such as the Eiffel Tower and Montmartre. Popping up everywhere (like under an opening-and-closing church dome) are fragrance flacon silhouettes and the house’s logo.

“I wanted the perfume bottles to be in Paris like a tourist,” said Kurkdjian.

Fine details are seen throughout. One of the shelving units in the store (that’s entered from the walkway through a right-hand door) has been fashioned after Kurkdjian’s bespoke fragrance case, for instance. And giving a nod to Paris’ zinc rooftops is the gray color chosen for the boutique, which echoes the hue of parts of the brand’s product packaging.

The store’s floor is made of terrazzo and its ceiling has handmade gold paper. For the shop, Béatrice Ardisson mixed music that features classical melodies that morph into modern tunes.

Kurkdjian also let his imagination run riot when working on his new line.

“Today, there’s no link between the perfumed products we use from day to night,” said Kurkdjian, referring to their lack of olfactive harmony. He is often vexed when unable to find laundry detergents and fabric softeners with complimentary fragrances, for instance.

Aqua Universalis, among his brand’s four fragrance variants, aims to tackle that issue. Inspired by the scent of cleanliness with notes of bergamot, Sicilian lemon, lily of the valley, sweet mock orange and light and musky woods, it comprises 2.4- and 6.8-oz. eaux de toilette sprays as well as 35-oz. bottles of concentrated laundry detergent and fabric softener.

There is also a “photophore” candle that isn’t housed in a traditional glass container, but rather, forms a hollow in its center as it burns, so it seems to glow from within.

“We try to put a little twist on things to bring interest,” said Kurkdjian.

That twist is evident in “Tour Atour,” a leather bracelet impregnated with fragrance.

A box of incense paper, with 20 scented strips and matches, rounds out the collection.

The bracelet, candle and incense paper are also available in the Lumière Noire and APOM scent collections, each of which include an eau de toilette for men and an eau de parfum for women, as well as a room spray.

Although company executives would not divulge sales projections, industry sources estimate the brand will generate $2 million in wholesale revenues in its first year.

The aim is to double the brand’s door count to 20 next year, said Chaya, who added more freestanding Maison Francis Kurkdjian stores could be opened in the future.