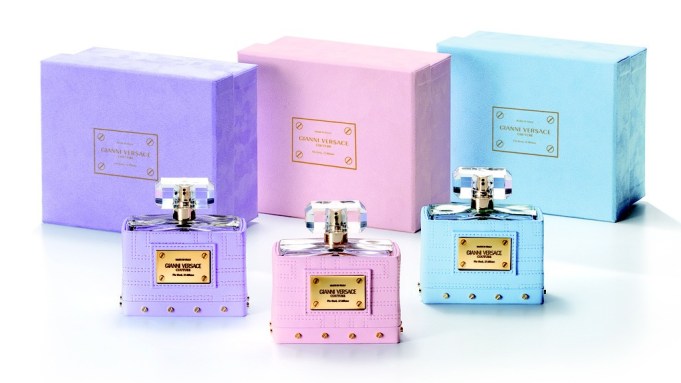 MILAN — Haute couture season may have just wrapped up in Paris, but Versace and Euroitalia are gearing up for a made-to-measure fragrance launch targeting die-hard fans of the fashion brand. Called “Gianni Versace Couture,” the three eaux de parfum come presented in napa leather cases dyed to match their star ingredients, with the Greek key motif stitched into the leather.

The launch, which kicks off this month in a very limited distribution network — about 500 doors total — is part of a larger plan to attract top-end luxury consumers internationally: another premium edp, Versace Pour Femme Oud Oriental, hit shelves in December. The Gianni Versace Couture scents will reach all markets in the spring.

“I wanted to create something truly unique and exclusive — perfumes that are not linked to a specific Atelier Versace collection but that could immediately recall the atmosphere of sophisticated luxury,” said Versace creative director Donatella Versace. She added that she selected her personal favorite ingredients for the line: violet, tuberose and jasmine.

“Versace is an emblem of the luxury and exclusivity of Italian products, and so developing more refined fragrances with a niche market in mind, for real fashion addicts of contemporary luxury, is important,” said Euroitalia president Giovanni Sgariboldi, noting the couture fragrances will be available only in Versace boutiques and select retailers, such as Milan’s La Rinascente Duomo store and London’s Harrods, which has a March exclusive.

Sgariboldi said sales expectations were especially high in the U.S. and in the Middle East, and he also anticipated a solid performance in Europe and Asia. He would not disclose figures, but market sources said given the niche target, the Gianni Versace Couture scents could bring in $5 million in retail sales after a year on the shelf.

Euroitalia and Versace opted to focus on smaller-scale p.r. initiatives rather than a full-blown advertising campaign, Sgariboldi said, noting: “The women who these fragrances are aimed at are not influenced by ad campaigns; on the contrary, they are women who are passionate about finding rare pieces and collector’s items.”

The Gianni Versace Couture fragrances, all in 100-ml. bottles, will each be sold with a leather case and box for 350 euros, or about $474 at current exchange rates. Customers who want to purchase a refill will be able to buy the bottle on its own for 180 euros, or about $244.