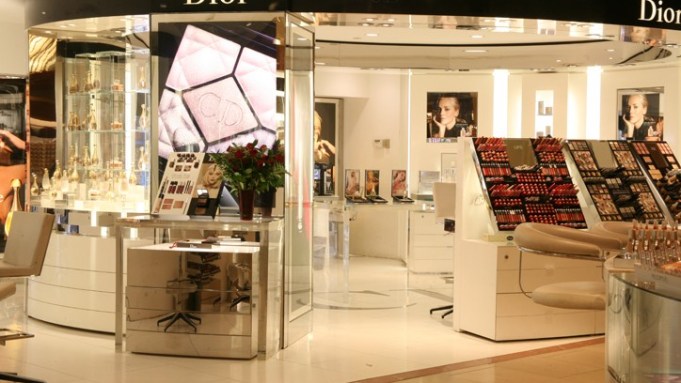 Beauty is treading a slippery slope.

With a financial maelstrom raging on Wall Street, the fourth-quarter outlook for the $8.9 billion U.S. prestige beauty industry is wary at best, with reports of overall department store sales down 1.6 percent for August and behind by 1 percent for year-to-date.

Cosmetics manufacturers and retailers don’t expect an easy road to the holidays. “I can’t imagine that the beauty industry will be able to pull off any more than flat [through December],” said Terry Darland, general manager of Parfums Christian Dior, North America.

William Lauder, chief executive officer of the Estée Lauder Cos. Inc., said of his business, “The consumers seem to be buying at the same level of last year,” despite scattered, anecdotal reports of vanishing traffic and sales resistance. But he pointed out the number-one issue going forward is how much disposable income the consumer will have to spend. “We are looking at different scenarios.”

Karen Grant, vice president and global beauty industry analyst at NPD Global Inc., sees tough going ahead. There’s less certainty in the market now than there was after 9/11, due to a comparatively lackluster product mix and weaker consumer interest in beauty overall. In late 2001 and early 2002, doctor skin care brands were the rage and makeup artistry was still ascendant, Grant observed, adding, “They kept having robust sales. It was also a period for new and emerging brands.”

Now, the wind has gone out of the sails. “New brands [of six years ago] are established now and we’re post-peak on a lot of trends,” said Grant. “We’re not experiencing this period of explosive growth of antiaging [products], doctor brands and makeup artist brands. We have to look at what’s [drawing] consumers to the category today. If it’s just business as usual, we’re not going to win.”

Turning to the numbers, Grant said, “the first quarter was the worst we had seen in more than 10 years of tracking the prestige beauty market, [but] even with consumer confidence lower than it was before the Iraq war and after Sept. 11, we saw positive momentum coming out of the second quarter in beauty,” she added. Still, such ups and downs stand to make second-half projections “anyone’s guess.”

Wendy Liebmann, co-founder and ceo of WSL Strategic Retail, said between the election and uncertainty of the federal bailout, consumers are in a “waiting to exhale moment.”

“They don’t want to be tempted so they are cutting back on trips to department stores and specialty stores, and are looking to trade down,” said Liebmann, adding consumers are finding ways to stretch their dollars further by shopping in mass retailers and using up products “until the last squeeze” before replenishing. On a bright note, she said some department stores have reported beauty has kept traffic in their stores.

“We are outperforming the store trend [in beauty],” said Howard Kreitzman, vice president of cosmetics and fragrances for Bloomingdale’s. “Newness has been very good in fragrance or color and I’m not seeing any real price resistance. We’re still getting good growth out of high-end skin care. Our men’s fragrance business has been terrific — it has a great deal of newness and a number of exclusives. On the women’s side, we exclusively launched Estée Lauder’s Sensuous, Lancôme’s Magnifique and Ralph Lauren’s Notorious, and all are doing well. The new David Yurman women’s scent is doing well and Gwen Stefani’s Harajuku Lovers project has been everyone’s great surprise.”

In terms of strategy, Kreitzman is leaning hard on events and exclusives to draw consumers into the store. “We have momentum,” he said. “We are doing all sorts of beauty promotions to create energy and excitement in-store.”

A big chunk of in-store excitement will come in November, when Bloomingdale’s opens nine Space NK shops-in-shops in its doors. “We’ll be adding 45 to 50 brands that we don’t currently carry, and it’s going to give customers a great range.”

At J.C. Penney, what’s selling are “Doorbusters and Sephora,” said Myron “Mike” Ullman 3rd, chairman and ceo of J.C. Penney Co. Inc. “Our hidden weapon is customer service — and Sephora does that very well,” he said Tuesday evening during a reception for the Skin Sense Awards in New York. “Also, they gave us a full-format beauty offering.”

Of the beauty categories, Ullman is most bullish about skin care. “Because we are so invested in service, I believe skin care is our biggest opportunity,” he said. “It’s a category that requires a one-on-one experience, and we’re able to do that with our Sephora doors.”

Darland of Parfums Christian Dior said, “Things aren’t going to get better before Christmas. We are going into the season at plus 13 percent year-to-date; I will be very happy if I’m at plus 4 percent at the end of December.”

In terms of promotion in the fourth quarter, Darland actually plans to triple Dior’s TV spend, focusing on the company’s Miss Dior Cherie and J’adore scents. Print campaigns will be conservative, she said.

“There are definitely cuts being made at department stores; open-to-buy is lower,” Darland continued. “Also, stores like Macy’s are hugely skewed in fragrance right now, and that’s a heavily populated category.” And everyone — retailers and manufacturers alike — are going out earlier with holiday offerings. “There will be many more holiday offerings in store in October than there were last year,” she said. “People want to get that money done up front.”

“Retailers are very concerned about turns, and they’re looking for funds to promote events and get people in the store,” said Heidi Manheimer, ceo of Shiseido Cosmetics America. “We are strategizing with our retailers to help them get people in the store. We’re participating in Macy’s Beauty Week, and are having a lot of success with an in-store event called Studio on Location, where makeup artists go into stores and perform makeovers and demonstrate runway beauty techniques.”

“Every year we say Christmas comes later and later; one year it’ll happen in May,” he said with a wry laugh. “Right now, people are not coming into the stores as much as they once did,” he said. “So we’ve changed strategy. We’ve shortened hours [of sales associates] prior to Thanksgiving, and put a larger emphasis on having longer hours closer to Christmas.”

“Despite the turmoil, we are confident about the end of the year,” said Serge Jureidini, president of the Lancôme division of L’Oréal USA. At Group Clarins USA, president and ceo Jonathan Zrihen said he is controlling internal expenses in order to maintain investment in the brand.

At QVC, Allen Burke, director of beauty and cosmetics, said, “We’re devoting more air time to beauty than we have in the past. In a tough economy, our beauty business is one of the businesses that has done very well and will play even a larger role in the fourth quarter.”