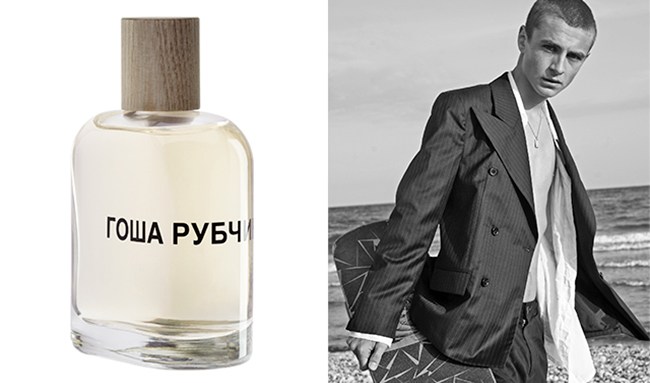 His debut scent, produced in collaboration with Comme des Garçons, springs from the youth scene that is the focus of his photography and his men’s wear collections.

“When we started, it was not just about the smell, but more about feelings and we are talking about Moscow, about young boys skating on the streets, about summer, concrete, wood and city smells,” he said in an interview during London Fashion Week, where he debuted a new skate brand at Dover Street Market, called Paccbet, the Russian word for dawn, by his skater friend Tolia Titaev. “It’s not just a product — it’s art and visuals around it, so that’s why we will launch a small book at the same time. It’s called ‘Perfume Book.’”

The tome, in a limited edition of 1,000 copies, is to be sold separately from the eponymous scent, debuting Oct. 8 at Dover Street Market in London during the Frieze art fair and the Paris Trading Museum and Comme des Garçons perfume shop in Paris. It is to arrive at other Dover Street Market locations in November, followed by a wider rollout in early 2017. The fragrance will retail for $88.

Rubchinskiy followed one model, Louison Savignoni, who has appeared in some of his other books and runway shows, to capture the “perfect summer weekend.”

“It’s one boy on a vacation, the beach, some landscapes, summer and skateboard and that’s it,” he sad. “It’s the best way to explain my perfume.”

The designer collaborated with perfumer Alexis Dadier to translate all of those impulses into an olfactory expression, incorporating accents of tar and rubber to connote skateboard wheels heating up on the pavement.

Top notes include angelica root and buchu flower essence, with mandarin seed and blue chamomile mid notes and styrax, vetiver and patchouli for the dry down.

Rubchinskiy acknowledged the narrowing-down process from dozens of scents was challenging and complicated. He solicited input from his friends, some skater kids, and also Adrian Joffe, chief executive officer of Comme des Garçons International, which produces and distributes Rubchinskiy’s fashion collection.

“I think it’s a smell for young people,” Rubchinskiy said, skirting the word unisex, which makes his soft face curl into a rare frown. “It’s not for men or women — it’s like Commes de Garçons perfumes in the idea that I want some girls using their boyfriend’s perfume; it’s more like an art piece than a perfume. That’s why we are doing the launch during Frieze; it’s an art thing.”

Rubchinskiy decided on an oval bottle with a cap made of wood, echoing the original material for skateboards.

“We specifically made it the same color as the normal skateboard and Tolia’s friends helped us to choose the right one that looks exactly like a skateboard,” he said.

Asked if he’s a fan of fragrance, the designer replied: “It depends: Sometimes I like, sometimes I don’t. It’s interesting. I like not only smell, but also stories. I have a few Commes des Garçons scents and I like when it’s interesting. Not everyday perfume, or aftershave.”

Asked about the next step, Rubchinskiy smiled and gave a little shrug. “I don’t know. Now we have this one. Let’s see what happens.”