Gucci in the Black With Next Fragrance Launch

Gucci Guilty, the blockbuster scent launch of 2010, is back as Gucci Guilty Black, a new male-female masterbrand aimed at a younger fashion-conscious audience. 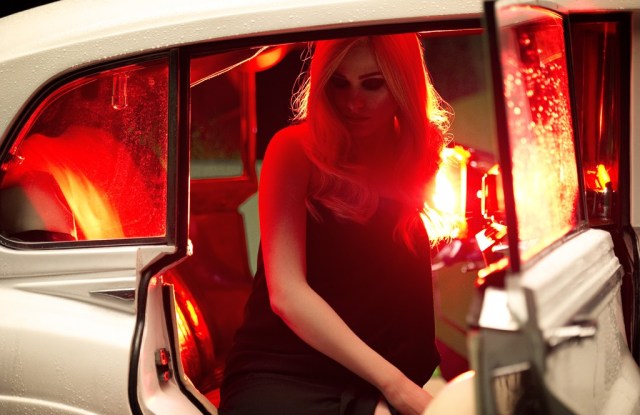 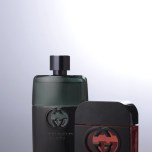 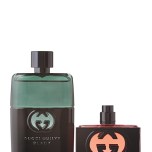 MILAN — Gucci is pleading Guilty again with the launch of new Gucci Guilty Black scents for men and women. The original Guilty fragrance hit stores in 2010 and approximately 13,000 bottles have been sold since then, according to Procter & Gamble Co., Gucci’s fragrance licensee.

Luigi Feola, P&G’s vice president of global prestige, said Gucci Black aims to write the next chapter of the Guilty story by continuing to tap into a pool of customers new to luxury fragrances. “We tend to target moods, but this is aimed at a younger age group,” said Feola. “We expect the majority to be new to the fragrance.…They’re brand lovers, but they can’t necessarily afford the fashion offering. It’s a great entry point for the world of the brand.”

He also said the original fragrance performed uniformly well internationally, with the Middle East, Russia and the U.S. as standout markets. The new launch will kick off in February and, by midyear, worldwide distribution will be complete, totaling roughly 22,000 doors. Feola would not provide an estimate, but industry sources predict the new fragrances will top $150 million in first-year retail sales.

“At the time of the [original] Guilty launch, it was so successful that we could see the effects on the category growth as a whole,” said Feola, adding that P&G aimed to re-create this growth, especially around Valentine’s Day, a hot sales moment for the Guilty franchise. The men’s and women’s eaux de parfum will arrive in stores at the same time, and customers will see an array of Guilty products on display together.

While the Gucci Guilty Black fragrances still play with the idea of giving in to indulgence, the new ad campaign, slated to roll out with the launch, is racier than the previous ones. Testimonials Evan Rachel Wood and Chris Evans are back, shown skidding across a dark road — she in a white car, he on a motorcycle — and when the wheels stop spinning, they succumb to a moment of passion in the backseat of her vehicle. Gucci creative director Frida Giannini said director and comic book artist Frank Miller and photographers Mert Alas and Marcus Piggott “create an amazing chemistry between Evan and Chris and bring the story to life just as I had imagined it — sexier and darker, full of provocation.”

“The consumer interested in Gucci Guilty Black is really the same as Gucci Guilty, but younger and more daring,” she noted, adding that “the Gucci Black wearer wants to feel empowered and sensual. The fragrance helps him or her to be liberated and want to take more risks.”

The Gucci Guilty Black women’s scent is a creamy and warm oriental floral with red fruits and pink pepper in the top notes, lilac and violet in the heart, and patchouli and amber as base notes. The new men’s scent is a fougère that opens with coriander and lavender over a heart of orange flower, neroli and aromatic notes, with a base of patchouli and cedarwood.

Giannini designed both the bottles and the packaging, using green glass for the men’s and red glass for the women’s to evoke the Italian maison’s iconic colors. The flacons will maintain the shape and interlocking Gs of the originals, but will rely on black metallic finishing as opposed to gold and silver.

“With these fragrances I wanted to reveal a sexier and more sensual facet of the house’s DNA,” said Giannini.