“We are entering a new cycle for Guerlain,” explained Laurent Boillot, chairman and chief executive officer of the LVMH Moët Hennessy Louis Vuitton-owned brand. He said the house has been registering solid growth backed by strong projects such as the perfume La Petite Robe Noire, Orchidée Impériale skin care and a new factory.

“It’s time for Guerlain to go even more international,” he continued, adding now is also a moment for the label to focus further on perfume.

“The cahier des charges [or specification] was to say the next fragrance had to be a manifesto of Guerlain,” he said. “Why? Because we are going to speak to so many consumers in the world who don’t even know who we are. When they have the first experience with Guerlain, it should be what the brand is with 190 years of history and what it wants to be like in the future.”

A key element for building swift awareness is the scent itself. Mon Guerlain’s juice was conceived by Guerlain master perfumer Thierry Wasser and Delphine Jelk. “It’s reflecting the idea of Guerlain revisited, a new Guerlinade,” said Boillot, referring to the base composition that most Guerlain scents share, including notes such as Tahitensis vanilla, Carla lavender, jasmine sambac, sandalwood and rose.

“The fragrance is inspired by a woman with different facets,” said Boillot. Specifically, Wasser gleaned inspiration from Angelina Jolie, the scent’s muse and its face. 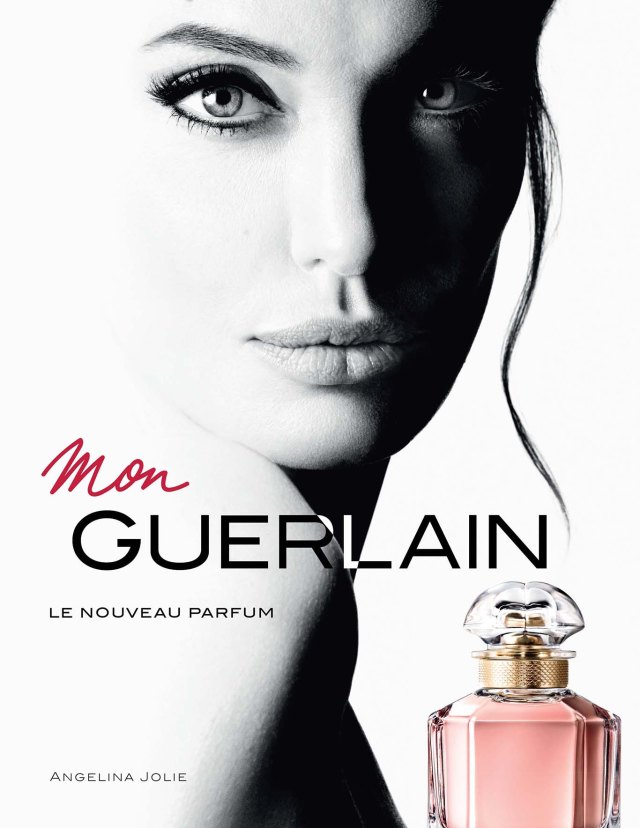 Guerlain executives mined the brand’s archives and chose a streamlined flacon with a quadrilobe stopper dating from 1908. “It’s so modern because of the pure lines, the pure design,” said Boillot of the bottle, which has the name “Guerlain” appearing directly on it; there is no label.

The scent’s moniker, which is translated as “My Guerlain,” was meant to put the brand’s name at the forefront. “We believe that intimacy with your fragrance is important,” continued Boillot.

Jolie has known Guerlain since childhood, as her mother used its iris-and-violet-scented powder.

The fragrance’s film advertisement comes in various formats including 60, 30 and 20 seconds. Jolie appears in and directed the video along with a small Guerlain team and Terrence Malick. It reimagines the perfume’s creation.

John Munro lensed the print campaign, which involves two black-and-white images — one of Jolie’s face and shoulder, and another that’s a silhouette in which the tattoo on her back appears. “The objective was: Let’s do something that is iconic,” said Boillot.

Jolie, whose other activities include serving as a special envoy of the United Nations Refugee Agency and being a cofounder of the Preventing Sexual Violence Initiative, is to donate her salary for the Guerlain advertising campaign to charity.

“We never invested so much in a fragrance [launch],” said Boillot, without divulging numbers.

The fragrance is due out in all countries on Wednesday save for China, which is slated for early next year. Today, Guerlain’s strongest markets include France, China, Russia, the Middle East, travel retail, Italy and Spain.