Guess Dares to Break the Fragrance Mold With Dare For Men

The apparel and retail brand celebrated the new fragrance last night with a West Hollywood event attended by Hailey Baldwin and Charlotte McKinney. 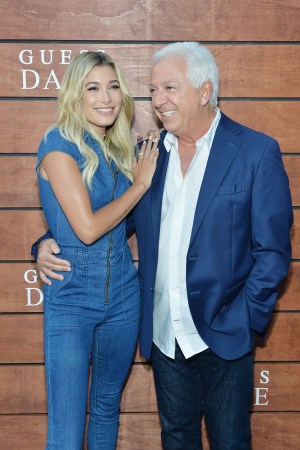 Guess girls have a new reason to get close to the guys in their lives.

The retail and apparel brand has launched the men’s fragrance Dare — a follow-up to September women’s scent release Double Dare — and celebrated it last night at Ysabel in West Hollywood, Calif., where models Hailey Baldwin and Charlotte McKinney mingled with mogul Paul Marciano, cofounder and chief creative officer at Guess. Dare for Men is available in three eau de toilette sizes: 30 ml. for $39, 50 ml. for $49 and 100 ml. for $65.

Creating the fresh woody citrus fragrance with confident adventurous men in mind, Givaudan perfumer Jacques Huclier pushed the envelope with Dare by breaking from aromatic fougère scents that have dominated the U.S. men’s scent market. Its top notes are bergamot, white peppercorn and juniper berry; middle notes are geranium, jasmine and cashmere woods; and base notes are musk, patchouli and cedarwood.

“The ingredients were chosen to be very, very distinct and not like anything else out there. That’s not easy to do when last year there were 1,800 fragrances launched around the world. Especially in the men’s category, there hasn’t been a lot of difference over the years,” said Kate Greene, vice president of marketing at Givaudan. “This is borrowing from niche indie brands that are using woods in very unique ways. Woods are very sensual and can be very sexy, and are very much trending.”

Greene suggested Dare nudges Millennials toward a different olfactive experience in an accessible manner. “It combines the woods with citrus, which is very familiar,” she said. “The young consumer started out with grooming products that have a lot of citrus notes, so I think it’s a wonderful way to appeal to the Millennial with something that’s a little bit familiar and then surprise them with the woods that are pumping in there. They are kind of a fickle consumer, so you want to grab them with something memorable and then bring them into something completely new.”

At the event Wednesday, Baldwin sounded as if she could be convinced to douse her date in the scent. “I like when a guy smells good, for sure,” she said. “I did really like a scent on a boy for a while who’d wear Bond [No. 9], but now every time I smell it, I’m like waaaa waaaa.” McKinney has lower standards for male odor. “I like a guy to naturally smell good. I think deodorant is important. Just be clean. That’s it,” she said, adding about her own perfume preferences, “I don’t [usually] wear any fragrance whatsoever. I’m more about being natural. That’s why I like some of the Guess stuff because it’s very clean and not too heavy.”

Dare’s packaging and ad campaign ooze masculinity. The bottle features a gunmetal cap and metal plaque engraved with the Guess logo fastened to the bottle with embossed screws. The carton’s pattern harkens to the brand’s denim heritage. Shot by Yu Tsai, the campaign features models Hannah Ferguson and Gui Fedrizzi outside in palm tree- and sunlight-speckled California settings. Developed with licensee Coty, the fragrance is available at Guess stores, and select perfumery chains and department stores.