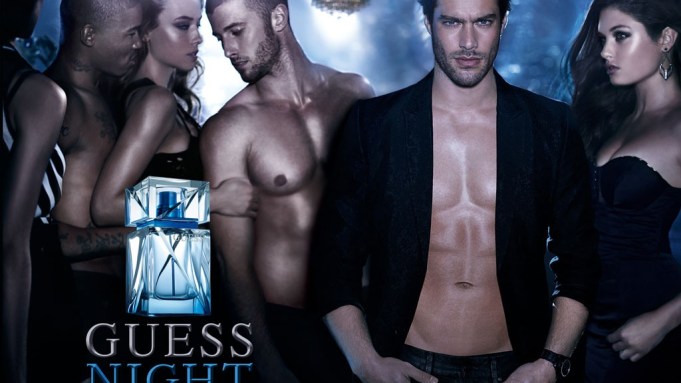 Guess is looking to own the night with its newest men’s scent, which is intended to marry fashion and fragrance with a downtown edge.

“We’re positioning this as our next major pillar,” said Teri Siegel, vice president of global fragrance marketing at Coty, which holds Guess’ fragrance license. She added that the scent is positioned chiefly at 18- to 24-year-olds.

The juice, a fresh woody fougère, was created with Antoine Lie and Francis Kurkdjian at Takasago. It has top notes of hot pepper, grapefruit and elemi; a heart of cedarwood, geranium and vetiver, and a drydown of patchouli, labdanum and black vanilla. Lie calls it “classic, but with a modern twist.”

The blue faceted bottle is intended to be reminiscent of nightclub lights, said Siegel, with the facets reflecting light from every angle.

“I have always been passionate about music and the way it connects the Guess brand with our audience,” said Marciano. “The electric energy of [electric dance music] inspired the creation of Guess Night, a scent that will be the first thing the Guess man puts on before going out to make him feel confident.”

The majority of the advertising will break in November fashion, beauty and lifestyle magazines as single- and double-page ads. The brand also has an involved digital plan in the works, which will include a fragrance microsite linking off the main Guess site and a gaming proposition which it hopes will draw tech-savvy consumers into the brand. Participants answer the question “How do you own the night?” By answering and inviting friends to play, users can win instant prizes, with grand prizes to include a free trip to one of the six Guess Night launch parties in New York, Los Angeles, Milan, Chicago, Miami and Las Vegas.

As well, the fragrance will be promoted on Guess’ Facebook fan page, which currently has about five million fans, and its Twitter feed, which has about 125,000 followers. Additional digital features, to live on the microsite, include a video section and behind-the-scenes glimpses of the fragrance’s ad shoot.

Globally, the scent will be in about 22,000 doors, including Guess retail stores, said Siegel. In the U.S., it will be sold in about 3,000 department and specialty store doors.

While executives declined comment on projected sales, industry sources estimated that Guess Night could do $22 million at retail globally in its first year on counter.