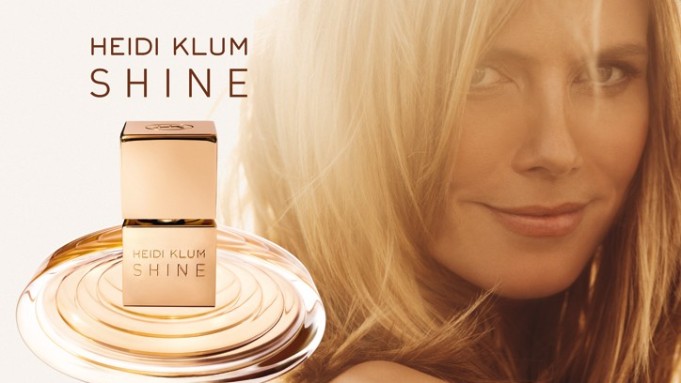 Just don’t call her an actress.

“I tried to do that and I don’t think I’m good at that,” Klum said frankly, while conducting an interview with WWD about her first women’s fragrance with Coty, called Shine. “I thought ‘Everyone else is doing it and I should, too,’ and I went that route about nine years ago in L.A. I’d rather do what I love to do. I love to create things. I’m an entrepreneur. I love business. That’s my passion.”

Another of Klum’s major passions is her husband of six years, Seal. In fact, the couple’s relationship inspired an unusual touch in the luxe penthouse suite at the Mondrian in Manhattan’s SoHo neighborhood where the interview was conducted: rather than sitting on a chair, Klum was perched on a pile of sand — obtained from a local Home Depot — in a corner of the windowed room. (Pity the poor housekeeper who had to clean up the place.) Klum’s affinity for the sand can be attributed to her yearly wedding vow renewals, usually held on a Mexican beach each year as a nod to her May 2005 wedding.

Despite the close bond Klum and Seal have, there’s one area they don’t share: a love for Klum’s hit show, “Project Runway.” “You know, my husband has never seen one [episode.] What about that for a fun fact?” she said with a laugh. “He’s come to the set, but he hasn’t watched an episode.”

Speaking of the show, on this day Klum is clad in a shimmery dress and shoes designed by her “Project Runway” colleague Michael Kors, accented with Lorraine Schwartz ruby jewels. Klum noted she originally committed to 10 seasons of “Project Runway,” and “we’re on nine already,” she said. “Even though I’ve been doing this for so many years, I’m still grateful for it, and I still love it. Every time, when I go there, these people make it all new for me again. There’s 15 people on that stage that want it, and for them it’s a great chance. If they step it up, I’ve got to step it up, too. They recharge you — they’re like a new pack of batteries coming in.”

But they’re not all, she emphasizes, well adjusted. “We’ve had some crazy people there who were really great sewers and designers,” she said. “We have a mixture of different people. It keeps it fresh and interesting.”

Klum has just launched her own channel on AOL.com, heidiklum.aol.com, in a deal reported to be worth $1 million and half of the profits generated. “I wanted to launch a destination,” said Klum. Beauty, fashion, interior decorating, fitness, nutrition, organization, arts and crafts for kids are all part of the channel — mostly, she says, because as a mother of four they all concern her and she believes they concern other women as well. “For instance, I have a great art teacher for my kids, and she thinks of the most amazing projects — so that is her specialty on the channel,” said Klum. Another friend, Linda Rothschild, is lending advice on organization, while party planner Mindy Weiss is advising on planning the perfect fete. Klum has already created about 50 five-minute videos on various topics for her channel, with more to come.

Klum is interested in planting her flag in multimedia territory because she feels it is where the media market is moving. “Eventually, television will be gone, and unfortunately so will be a lot of the magazines,” she said. “It’s not going to happen in the next two or five years, but we will all go into cyberspace. I look at my 1 1/2 year old daughter, and she’s on the iPad, looking at photos of herself and putting a video on of something. It’s just going to get faster and faster, all this stuff — and I’d like to have a place in that market now.”

She’s not quite as enthusiastic about social media. “I’m going to start Twitter this summer, but it’s just for one specific thing — a run that I’m doing,” she said. “But I’m not into Tweeting like, ‘I’m at Starbucks and I took two sugars and syrup in my coffee.’ I want to inspire people to be healthy. People always say, ‘How do you do it?’ I get up at 6 in the morning and I put my sneakers on and I get my booty out on the West Side Highway. That’s how I do it.”

Another recent endeavor is her first fragrance with Coty, Shine, which is set for a September launch. “There are different moods that as a fragrance creator you can travel to,” said Klum. “But for my first one, I wanted what I felt my staple would be. I wanted it to be sensual and feminine, but still luxurious and expensive-smelling — because I think there are so many perfumes out there that smell cheap and too sweet.”

Aurélien Guichard, Jean Guichard and Olivier Pescheux of Givaudan worked with Klum to create the floral oriental juice, which has top notes of mandarin, pear and pink peppercorn; a heart of mimosa absolute, lily of the valley and sunflower, and a drydown of vanilla, Venezuelian tonka bean and musk cosmone. The bottle is molded with a concentric pattern of waves, intended to reflect light in a variety of directions. The collection will include eaux de toilette in three sizes — 15 ml. for $17, 30 ml. for $28 and 50 ml for $35.

“We are positioning Heidi as a pillar for our business,” said Bernd Beetz, chief executive officer of Coty Inc. “She is very genuine and connects well with her consumers.”

Both print and TV ads — shot by Nabil Elderkin — are planned for the campaign. The print ad depicts a windblown Klum on a beach, gazing sensually into the camera. “That was a bit of a battle,” said Klum. “Most people want a big smile. But I don’t feel like it always has to be a big toothpaste smile — this one comes more from within.”

TV advertising is planned globally, including the U.S., and will break in September; print breaks in September fashion, beauty and lifestyle magazines. Industry sources estimated that Coty will spend about $5 million on advertising and promotion in the launch period from September to December.

But don’t look for utter perfection in the campaign: a pet peeve of Klum’s is overdone retouching. “You can sell a dream, and you can sell a lifestyle that a woman aspires to have, but you can’t completely trick her,” she said. “If people retouch me too much, I get upset — yes, you can help me out a little here and there, but don’t go overboard. I have one tooth that’s longer than another, and if you look at the [Shine] ad my snaggletooth is coming out a little bit — but I like that.”

While executives declined comment on projected sales, industry sources estimated that Shine could do $45 million at retail globally in its first year on counter, with as much as half of that expected to be done in the U.S. The scent will be sold in about 16,000 mass-market doors in the U.S. and an additional 10,000 doors globally, said Steve Mormoris, senior vice president of global marketing for Coty Beauty.

Coty hopes to capitalize on Klum’s appeal with personal appearances in stores, including U.S. doors, said Renato Semerari, president of Coty Beauty. “Heidi has a genuine passion for this business which shows through on this project, and consumers see that,” he said.

Klum is already at work on a host of new fragrances. Summer Shine, a flanker, will be first — the juice is done and packaging is in the works, with the scent slated for a midspring 2012 launch. A “new Klum pillar” is slated for fall 2013, said Mormoris.

So what’s next for Klum? “To go on a great holiday with my family. We’re going on a boat to Italy. I love when the kids can go and eat sea urchin and the sea urchin is literally going like this,” Klum said, shaking her hands. “You cut the bottom off and then you eat it.” To the cries of “eeewww,” Klum retorted: “That’s what they do when you go to Nobu or whatever — it’s the same sea urchin, so you might as well eat it when it first comes out [of the sea.]”