Helena Rubinstein is rolling out Wanted, its first new fragrance in 26 years, which is fronted by Demi Moore. 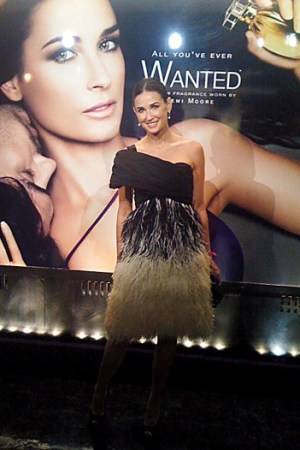 PARIS — Helena Rubinstein is rolling out Wanted, its first new fragrance in 26 years, which is fronted by Demi Moore.

This story first appeared in the October 16, 2009 issue of WWD. Subscribe Today.

When the women’s scent is introduced in Macy’s on Nov. 5, the L’Oréal-owned brand will also be dipping its toes in the U.S. market after a six-year absence.

The time is right for a new Helena Rubinstein scent, according to Elisabeth Sandager, president of the brand, plus Biotherm, Diesel and Cacharel. Wanted comes following Helena Rubinstein’s two-and-a-half-year facelift, including the signing of Moore as its spokesperson, a packaging revamped by Fabien Baron and new merchandising units and products.

Sandager explained it’s important to build upon the fragrance category, given some 50 percent of worldwide beauty sales are generated by scent and, of that, an estimated 18 percent of the business is rung up in the U.S.’s selective market.

Helena Rubinstein is no stranger to fragrance; its portfolio had at one time included scents such as Barynia and Heaven Scent.

Wanted was inspired by Moore and the romantic link between a man and a woman. Sandager said there’s a mix of femininity and masculinity running through the project.

“When you take the bottle, you have the very round feminine part and this very rectangular, masculine part,” she said, referring to the cap on the bottle created by Hervé Van Der Straten. The flacon is reminiscent of a drawstring purse, whose neck is cinched with gold-colored, metallic bands — meant to symbolize the bond binding a woman to her love. Each of the three bottle sizes takes a slightly different form.

Wanted’s print campaign was shot by Mert Alas and Marcus Piggott. The single- and double-page advertisements feature Moore, who is with a male model, and the fragrance. A 20-second TV film starring Moore was directed and lensed by Olivier Dahan.

Wanted was prelaunched in late July in France’s Galeries Lafayette and in Spain’s El Corte Inglés. The rest of Europe, save for the U.K., got the scent in early September. Asia’s introduction is under way and Canada will start selling Wanted one month after the U.S. launch.

So far, Helena Rubinstein’s major markets, such as Italy, Germany and Spain, have only run Wanted ads since the end of September or early October, but Sandager said the fragrance has already made the top 15 in some countries. In Holland and Belgium, it’s in the top 10, and in certain Eastern European markets, the fragrance has taken the number-one slot.