The new shop is the first Hermes shop dedicated entirely to beauty. 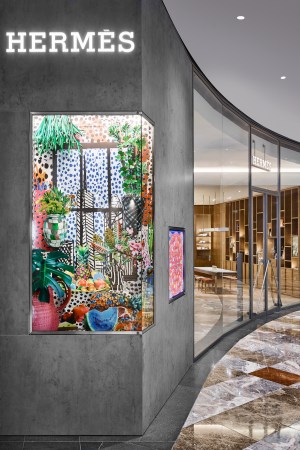 Hermès is taking the digital concept to a whole new level with its new perfumerie at New York’s Brookfield Place, which opens Sept.16.

Cheeky twists abound in the form of an app the company created for the store’s opening, dubbed 225 Liberty. By opening the app and using a smartphone at hot spots scattered around the 1,000-square-foot store, users can view live-action traditional Hermès references such as horses and the Eiffel Tower, and even a station that superimposes a horse’s head over the user’s face. “There’s a fun element of surprise to all of them,” said Robert Chavez, U.S. president chief executive officer of Hermès, Paris.

The shop is set up as a luxury home, noted Chavez. “We wanted to express the perfume’s métier, as we call it, in a special way,” he said. “That’s how this whole idea was born, to showcase fragrance all by itself. You enter into what’s meant to be like the front porch, where you have garden-type fragrances, then you walk into the living room, where you see the beautiful bespoke bookcases where you can discover the core of the collection. Then, all the way in the third part, we’ve created a bathroom [space] where all of the bath products are.”

Daniel Gordon is the first artist the brand is collaborating with in what will be a rotating art exhibit. Gordon created digital photo collages representing an urban oasis, one of which is on a high-resolution screen outside the store’s front doors, and another of which hangs in a window, said Chavez. “We’ll do maybe four changes [of artwork] a year,” he said.

Why New York and not Paris? Aside from the fact that the U.S. is one of Hermès’s largest fragrance markets, the center offered luxury neighbors and plenty of foot traffic. “We felt, with the revitalization of downtown and what they are doing here at Brookfield Place — making it a luxury center — we thought it was a great space to do the first perfumerie,” said Chavez.

Could the brand open similar stores elsewhere? Chavez didn’t rule it out, although none are planned at the moment. “We want to see how this one goes,” said Chavez. “However, based on early reaction to this one, it could possibly be a concept we would roll out to other parts of the U.S. and perhaps even other parts of the world.”