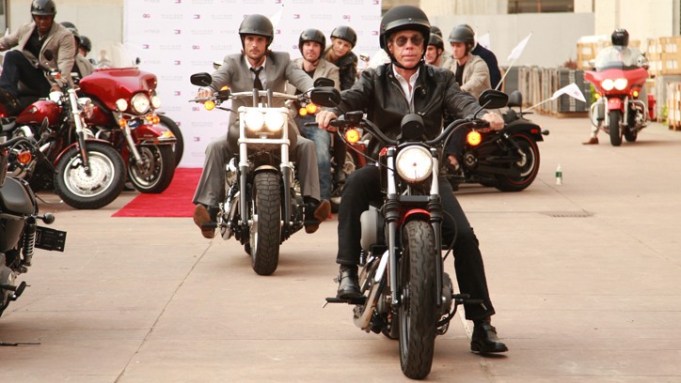 Call him the leader of the pack.

Gunning his Harley, Tommy Hilfiger roared up to Macy’s Herald Square Tuesday night at the head of a parade of bikers to mark the launch of his new men’s fragrance and the rollout of his collection of men’s and women’s sportswear.

While it wasn’t quite the world-famous Sturgis motorcycle rally in South Dakota, Hilfiger was one of 17 riders to pull up at the store as part of a motorcade of Harley-Davidsons — complete with police escort — that included Tommy Dunn, the model for the fragrance’s ad campaign, and 10 riders representing GQ magazine, one of the party’s sponsors.

The bikers had departed from Lincoln Center, where the designer’s show is scheduled to be held at 6 p.m. Thursday, and took a planned route across Central Park South, down Fifth Avenue, across 57th Street and then down Broadway.

Once he arrived at the Hilfiger boutique on the second-floor men’s sportswear department at Macy’s, which has the exclusive for distribution of the sportswear in the U.S., Hilfiger and singer Gavin DeGraw signed bottles of the new scent, called Hilfiger, and DeGraw’s CDs, while Dunn signed a few motorcycle helmets for gearheads in attendance.

“This brings back a lot of memories of when we were launching our first fragrance and went on a multicity tour,” Hilfiger said from the dais during a break in the more than hour-long autograph session. “I haven’t really done it in at least eight years. But it’s really exciting meeting our customers — it’s great to feel their energy.

“They are happy with the new fragrance and product line,” he added.

While no executive would comment on sales, industry sources estimated the event, which attracted more than 200 people, drove sales of the fragrance past the $12,000 mark for the day.

Martine Reardon, executive vice president of Macy’s corporate marketing, noted the new sportswear began arriving at the more than 5,000-square-foot in-store shop about a month ago and said she’s been pleased with its performance so far.

“It’s hugely important for us from a business perspective,” she said. “One of our mantras is to offer exclusive lines for our customer. And this is the very early beginning of that.”

While she was mum on details, Reardon hinted that Macy’s is looking to strike exclusive deals with other vendors as well, saying, “We’re hoping it’s going to be lots of other brands.”

“Tonight is a marriage with great expectations of a huge family,” said Fred Gehring, ceo of Tommy Hilfiger. “In the run-up to today, business has been super strong — we’ve had double-digit comps this year, and women’s is even outperforming men’s. Our shop is one of the most productive in Macy’s, which is a huge leap for the same brand that was in free fall a year and a half ago.”

Gehring said the brand is looking to expand into other categories, including a relaunch of kids in spring, the addition of a plus-size division and the separation of denim into its own section.

In keeping with the fashion week ubiquity of cast members of the CW’s “Gossip Girl,” Ed Westwick, who plays Chuck Bass on the show, dropped in at the start of the event.

“It was based on a series of books, so it already had a fan base built in,” said the 21-year-old native Brit, commenting on the show’s popularity.

Westwick, who was dressed in Hilfiger, said he will appear as a “guy from a small town” in a film next year called “Samantha D,” a sequel to “Donnie Darko” that picks up with the film’s youngest sister.

DeGraw, the 31-year-old rock singer and pianist who gained fame with performances on the CW’s “One Tree Hill,” released a self-titled album on Sony BMG’s J Records label in May.

“I’m a massive motorcycle fan, and the Hilfigers are real music guys, too — Tommy’s into music, his brother Andy plays the guitar, so this [event] is a good fit for me lifestyle wise.

“I used to live next to the Hell’s Angels clubhouse on [Manhattan’s] Third Street,” said the Catskills native. “Maybe that seeped into my psyche. It was awesome, it was so loud — that was my alarm clock.”

Dunn, a surfer and fisherman who added his furthest travels this summer were to Montauk, said he is building a house on the East End of Long Island.

DeGraw closed out the soiree with a performance on the store’s main floor. A crowd of about 250 heard him play eight songs.

To promote the brand, Hilfiger will be visiting 14 or 15 Macy’s stores around the country. DeGraw will perform at some of them, and others will include fashion shows, but all will be of the same scale as this week’s Herald Square event, according to Avery Baker, head of marketing at Tommy Hilfiger. “It’s the moment for the brand to reconnect again with our Macy’s customers.”

Baker added that the company’s opening of its Fifth Avenue flagship around the end of the year is another important initiative for the brand.