The scent, called Ivanka Trump, will start hitting fragrance counters in about 400 Macy’s doors next week. 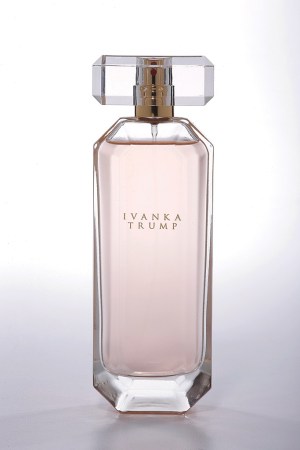 For Ivanka Trump, this is fragrance time.

She introduced her own jewelry collection in 2007, stepped into the footwear arena during holiday 2010, unveiled her handbag line in spring 2011 and disclosed a new licensing agreement last week with G-III Apparel Group Ltd. to develop sportswear, dresses, suits, suit separates, sleepwear, activewear, jeanswear and intimates. Sunglasses are due in March and she does outerwear with Fleet Street Ltd.

Now, it’s the right time for fragrance. “I think of fragrance as such a strategically important category and wanted to wait to make sure retailers understood what I stood for, and the customer understood what the brand represented because there’s a lot of noise in that category,” said the 30-year-old career woman and mother of  a 15-month-old daughter. She is one of the stars in NBC’s “Apprentice,” as well as an executive vice president of development and acquisition in her father’s real estate organization.

Trump has created her first eau de parfum women’s scent in a deal signed with Parlux Fragrances Inc. The product, called Ivanka Trump, will start hitting fragrance counters in about 400 Macy’s doors next week. The full rollout will start in the spring, culminating in a total of about 1,200 domestic department stores. Expansion overseas is being contemplated for fall 2013.

The fragrance was developed by Jennifer Mullarkey, fragrance developer for Parlux, and by Marypierre Julien, perfumer at Givaudan Fragrances. The formula is a floral oriental that opens with a blend of sparkling Italian bergamot, lush apple and pink peppercorn, a combination designed to evoke sensuality. The middle notes consist of jasmine, rose and peach blossom to add lushness. Golden amber, creamy vanilla, patchouli and smooth cedarwood are included in the base to provide a kick.  Price points are $62 for a 1.7-oz. edp, $78 for the 3.4-oz. size and $35 for a 6-oz. body lotion.

“Where there was a void in the marketplace at our price points was a professional, hardworking, yet feminine woman,” said Trump, who talks like a branding expert. “There’s a lot on the dowdy and mature side and there’s a lot on the kitschy, ultratrendy, but I think we’re filling a void for that feminine, empowered woman.”

Trump pointed out that she used coral in the fragrance packaging because it is her signature color. “There is coral always with white gold embossing. It feels delicate and fresh but there’s a strength to it. The bottle is evocative of one of the pieces in our jewelry collection, so you have the octagonal shape and looks like an emerald cut or cut diamond.” As for the fragrance itself, she said, “my tendency is towards more floral, but I wanted give it a little more complexity and a little more youthfulness than a classic.”

No one broke out sales projections, but industry sources calculate that the fragrance could generate $15 million in retail sales in the U.S. alone in the first year. Print advertising, photographed by Douglas Freidman, will appear in the March editions of fashion and lifestyle magazines. Market sources speculate that advertising and promotional spending could hit $7 million.