As he readies his latest scent, the designer paused to reflect on his entry into the fragrance business in 2001. 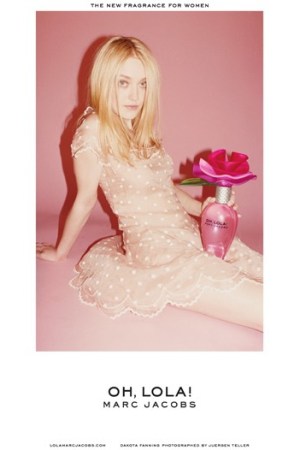 As he readies his latest fragrance, Oh, Lola, for launch later this summer, Marc Jacobs paused to reflect on his entry into the fragrance business in September of 2001.

“I never thought when we started years ago that we’d be a big player in the fragrance world. It seemed like, at best, we could have the name on a bottle, but I didn’t think we’d have such success and appreciation from the public,” Jacobs told WWD during an exclusive phone interview last week. “I was just in Berlin with my assistant, and in the airport there and at JFK, there were huge displays of my fragrances everywhere. I went into buy my cigarettes at duty free and there was an enormous display of my fragrance. People came up to me in the airports and on the street and were introducing themselves and saying how much they like my fragrances. The stewardesses on British Airways were speaking about them. It seems that everyone in the shops knows me because of the fragrances.”

Originally, Jacobs’ scent license was held by the American Designer Fragrances division of the LVMH-owned Parfums Givenchy and distributed in about 200 doors in the U.S. In 2003, Jacobs’ beauty license was acquired by the Coty Prestige division of Coty Inc. “When we first started in fragrance, it was like a right of passage for me and Robert [Duffy, Jacobs’ longtime business partner] — we have a fragrance, we’re a real designer house now,” said Jacobs. “[We thought] even if the success was only marginal, it was symbolic of something bigger to us. Once the fragrance business was sold to Coty, things completely changed. Now, it’s not just a name on a bottle of perfume. It’s like doing a collection in terms of the structure and work — the design, the advertising.”

That 2003 sale to Coty has launched some of Jacobs’ biggest scents to date, which include 2007’s Daisy, 2010’s Bang and 2009’s Lola. The last fragrance is getting a little sister, Oh, Lola, and Bang, a men’s scent, recently won a Fragrance Foundation FiFi award for Best Packaging.

“Everything leads to another,” Jacobs mused. “One of our first great fragrance successes was Daisy — the project was fresh, innocent — characteristics that exist in many girls and women. Ironically, a daisy is a flower that doesn’t smell, not that we’re publicizing that. Lola was the next girl in line. She is more seductive — softer, sexier, sultrier than Daisy. When Lola became a success on her own, we decided to do another fragrance in that line.”

The name, Jacobs said, is a play on “oh la la.” “We recolored the bottle and changed the juice,” he said. “This Lola is more of a Lolita than a Lola, but we weren’t going to call the fragrance Lolita. Lola is more seductive; Oh, Lola is sensual, but she’s sweeter.”

The sparkling fruity floral juice, which Jacobs developed with Calice Becker and Yann Vasnier of Givaudan and Ann Gottlieb, has top notes of effervescent raspberry, frais des bois and pear; a heart of peony, magnolia and cyclamen, and a drydown of vanilla, sandalwood and tonka bean. The collection includes eaux de parfum in three sizes — 1 oz for $48, 1.7 oz. for $68 and 3.4 oz. for $88 — as well as a 5.1-oz. body lotion, $45, and a 5.1-oz. shower gel, $40. The fragrance, which is a permanent addition to the line will have a one-month exclusive in Bloomingdale’s, followed by a rollout to the rest of the globe in August. At full rollout in the U.S., the scent will be available in about 2,000 department and specialty store doors, noted Lori Singer, group vice president of global marketing for Coty Prestige Designer Fragrances. While Jacobs and Coty executives declined to comment on projected sales, industry sources estimated that the scent would do about $60 million at retail globally in its first year on counter, with about 40 percent of that expected to be done in the U.S. Sources estimated that Coty would spend $25 million globally on advertising and promotion, with about 50 percent of that total expected to be done in the U.S.

Actress Dakota Fanning — who has also appeared in apparel advertising for Jacobs — is fronting the Lolita ads, which were shot by Juergen Teller in Los Angeles in February. “I’ve been a big fan of Dakota since the first time I saw her in a movie, and we made her a wardrobe in her size when she was 12, which was pretty incredible. When we were speaking about who to use in the Oh, Lola fragrance ads — I had recently seen ‘The Runaways.’ Dakota was in it, and I knew she could be this contemporary Lolita, seductive yet sweet.”

“Every time one of Marc’s fragrances comes out I run to the store to buy it,” Fanning said. “The moment I was asked to be a part of the Oh, Lola campaign, I was so humbled and said yes immediately.”

While the ads don’t hit until August fashion, beauty and lifestyle magazines, early visuals of Fanning leaked on the Internet earlier this spring — a development Jacobs took somewhat in stride. “It’s the same backstage at my shows — there’s always something online before my show even starts because of all of the people backstage,” he said. “We live in a world where things leak. That’s just the way it is. I don’t think there’s anything damaging about ads leaking. It’s nice to keep things a surprise, but that’s not the world we live in. It seems like a waste of energy to get upset about it. It does raise awareness for the project and I don’t think that’s a bad thing.”

Never one to take an extended break from anything, Jacobs is already at work conceptualizing a new scent. “I can’t say much about the new project, because there is literally nothing yet to say,” said Jacobs. “When I say it’s early days, I mean we had a meeting two days ago. We work very well with Coty because it’s a dialog — it’s like a tennis match, hitting the ball back and forth. I say something, they come back to me with something else, I give more feedback, they tweak and it keeps going until we have a finished product. We always get there eventually.”